Getting a fair price: a handy pocket-book for merchants (and smugglers?)

We recently acquired a little book with strong ties to Cornish trade and smuggling in the 18th century.  Money of England, reduced into money of Portugal was printed in the sea port of Falmouth, Cornwall, in 1787.  It is a pocket-sized book of tables and calculations of the rates of exchange between Portugal and England, together with conversion tables for measures of cloth, wine and corn, and weights – indispensable for the merchants and sailors involved in Falmouth’s lucrative trade network, clandestine or otherwise, wanting a fair price for their goods. 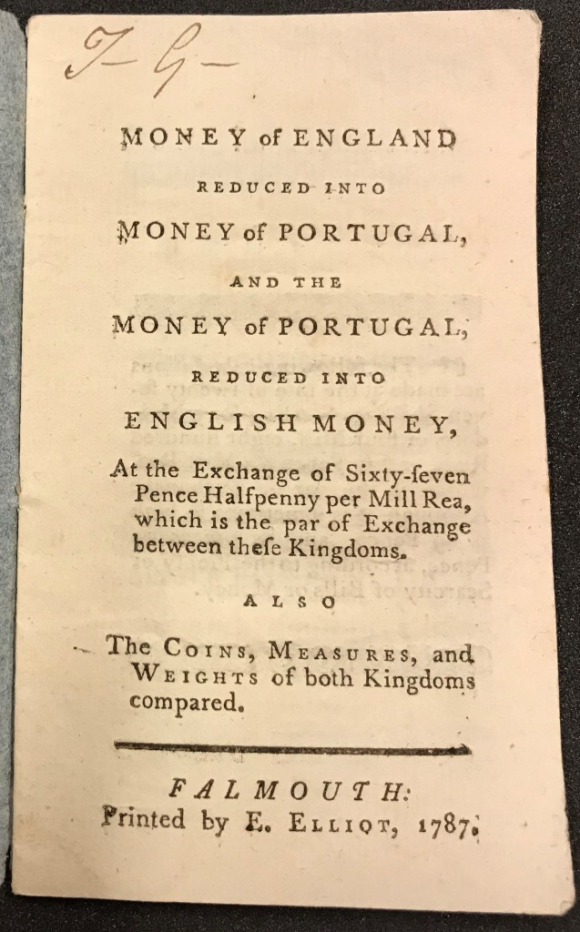 During the 18th century there was a thriving maritime trade between Lisbon and Falmouth, as described by Daniel Defoe in his Tour through the whole Island of Great Britain, 1724:

"Falmouth is well built, has abundance of shipping belonging to it, is full of rich merchants, and has a flourishing and increasing trade.  I say 'increasing,' because by the late setting up the English packets between this port and Lisbon, there is a new commerce between Portugal and this town carried on to a very great value.  It is true, part of this trade was founded in a clandestine commerce carried on by the said packets at Lisbon, where, being the king's ships, and claiming the privilege of not being searched or visited by the Custom House officers, they found means to carry off great quantities of British manufactures, which they sold on board to the Portuguese merchants, and they conveyed them on shore, as it is supposed, without paying custom.  But the Government there getting intelligence of it … that trade has been effectually stopped.  But the Falmouth merchants, having by this means gotten a taste of the Portuguese trade, have maintained it ever since in ships of their own”.

The Falmouth-Lisbon Packet Service described by Defoe started operation in 1689.  It was an early postal service that carried mail on packet ships from country to country.  There were other packet stations on the south and east coasts and, together, they ran important routes across the Atlantic, the Mediterranean and through Northern Europe.  The packet crews furtively traded goods on their own account, duty-free, on the side, making the packet service risky but potentially lucrative work.  Even when the government got wind of this practice and stamped it out, the smuggling continued using privately owned boats.  Portuguese gold bars and coin were particular favourites, and often found their way up to London.  This little pocket book would have been a handy guide for converting measures of smuggled goods, and calculating the exchange rate between currencies. 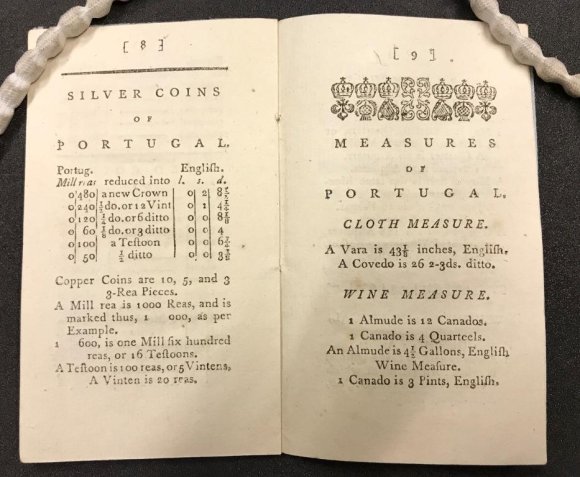 The last page has an advertisement for Elizabeth Elliot, bookseller, stationer and printer.  Elizabeth was the widow of the printer Philip Elliot and, together, their business was responsible for ten out of the 24 early printed books with Falmouth imprints that survive today.  Elizabeth’s shop sold an eclectic range of “books in all languages and all manner of bindings; stationary/wares of all sorts; mathematical instruments; violins, German and common flutes, and fifes, music, music-books and music-paper; the late Sir John Hill’s medicines, by appointment of Lady Hill; Wash-Balls, lavender-water, eau de luce, &c. &c.”.  Elizabeth took over the shop in 1787 and printed this book of tables, an English grammar for “young beginners”, two sermons, a book of spiritual songs and a satirical poem about slavery. 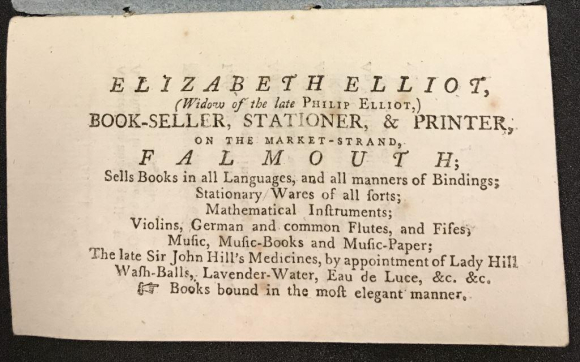