Although there are many examples within the India Office Records of sons following fathers and grandfathers into military or administrative careers in the sub-continent, today we shine the spotlight on a family where the opposite appears to have happened. 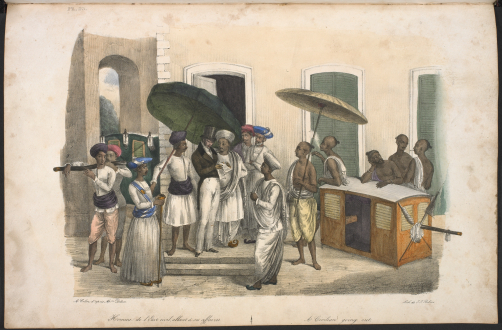 'A civilian going out' from Twenty four Plates illustrative of Hindoo and European Manners in Bengal. Drawn on the stone by A Colin from sketches by Mrs Belnos. (London, 1832?) Images Online

James Dewar Bourdillon was the son of a Huntingdonshire clergyman who entered the East India College at Haileybury in 1828, and arrived to take up a post in the Madras Presidency civil service early in the following year. He seems to have spent the 1830s and 1840s in a variety of administrative and judicial posts in Trichinopoly, Salem, and Nellore, later rising to become secretary to the Board of Revenue. The summit of his career was probably reached in 1856, when as a member of the three-man Commission tasked with investigating the local system of public works he wrote its Report. Unfortunately a few years later he was obliged to retire and return to the U.K. because of ill health, but he retained sufficient interest in Indian affairs to publish A Short account of the measures proposed ... for the restoration of the Indian Exchanges in 1882 under the pseudonym 'An ex-Madras Civilian'. He died in Tunbridge Wells in the following year aged seventy two.

So far, so conventional - Bourdillon's life and achievements were not radically different from other early Victorian servants of the Raj. One of his children, however, was to travel down a very different path.

This was his son Francis Wright Bourdillon, known as Frank, who was born in Madras on 7 November 1851. He appears first to have tried his hand at earning a living as a coffee planter, but also being a talented amateur artist he decided to leave India and undergo training at the Slade School of Art in London, following this with some time in the centre of the contemporary painterly universe, Paris. After returning to England he settled in Cornwall, where in 1887 he became a member of the Newlyn School, a colony of artists who were stimulated by the local scenery, residents, and light quality (not to say the cost of living). His style may well have been influenced by the example of the Pre-Raphaelite artist Thomas Cooper Gotch who was living in Newlyn at the same time, as can be discerned in works such as The Jubilee Hat, Duel on Bideford Sands and Aboard the 'Revenge'. We shall no doubt never know whether his artistic career was in some sense an act of rebellion against his upbringing, or if his family encouraged him in such endeavours.

There are two more twists and turns to record. In 1892 he all but abandoned art and went back to the land of his birth to work not as an administrator but as a Christian missionary. Eventually, however, he left India and died in the quintessentially English venue of Chipping Sodbury, Gloucestershire, in 1924.