More than 1500 volumes of East India Company Factory Records are being digitised though a partnership between the British Library and Adam Matthew Digital. The factories were the Company’s overseas trading posts from the 17th to 19th centuries. The Factory Records are copies of documents sent back to London to be added to the archive at East India House.

The main categories of documents included in this series are formal minutes of official meetings; diaries recording daily business and life at the factory; and correspondence.

A wide range of topics is covered, for example:
• Commercial transactions and dealings with local merchants
• Descriptions of goods traded, with prices
• Private trade of Company servants
• Relations with other European nations and with local inhabitants
• Ship arrivals and departures; negotiations with captains
• Personnel management
• Misdemeanours
• Establishments and salaries
• Complaints and petitions
• Sickness and death

The first of two modules of digitised Factory Records was launched recently. It includes the Company trading posts in South and South-East Asia. Amongst these are the records for the Hugli Factory in the Bay of Bengal, 1663-1687. 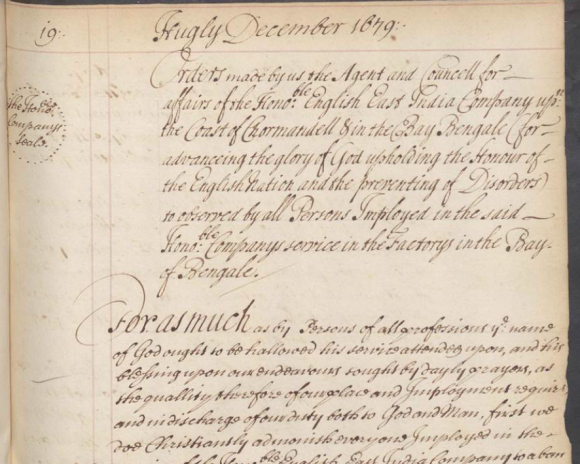 In December 1679 the Agent and Council for the Coast of Coromandel and the Bay of Bengal composed a set of orders ‘’for advanceing the Honour of the English Nation and the preventing of Disorders’. All Company servants employed in the Bay of Bengal were instructed to –

• Stop lying, swearing, cursing, drunkenness, ‘uncleaness’, ‘profanation of the Lord’s Day’, and all other sinful practices.
• Be sure to be back inside the Company house or their lodgings at night.
• Say morning and evening prayers.

Penalties for infringement were specified.

If these penalties failed to ‘reclaim’ someone from these vices or if any man was found guilty of adultery, fornication, or ‘uncleaness’, or disturbed the peace of the factory by quarrelling or fighting, he was to be sent to Fort St George for punishment.  The orders were to be read publicly at the Factory twice a year so no-one could profess ignorance of them.

One of the Company officials who signed the regulations was Matthias Vincent. He was accused in India of corruption, immorality and extortion!

The East India Company digital resource is available online from Adam Matthew and there is access in British Library Reading Rooms in London and Yorkshire.

Posted by Margaret.Makepeace at 08:30:00 in Commerce , Manuscripts , South Asia , Work