Easter Sunday fell on 1 April in 1866. A large crowd gathered outside London Zoo.  They produced admission tickets which they had bought for one penny, a bargain since the usual price was 6d. The visitors became ‘exceedingly boisterous’ when they were refused entry and told that they were victims of an April Fool hoax.

The tickets were printed on green coloured card and read:
‘Subscriber’s Ticket – Admit bearer to the Zoological Gardens on Easter Sunday. The procession of the animals will take place at three o’clock, and this ticket will not be available after that hour.  J. C. Wildboar, Secretary’. 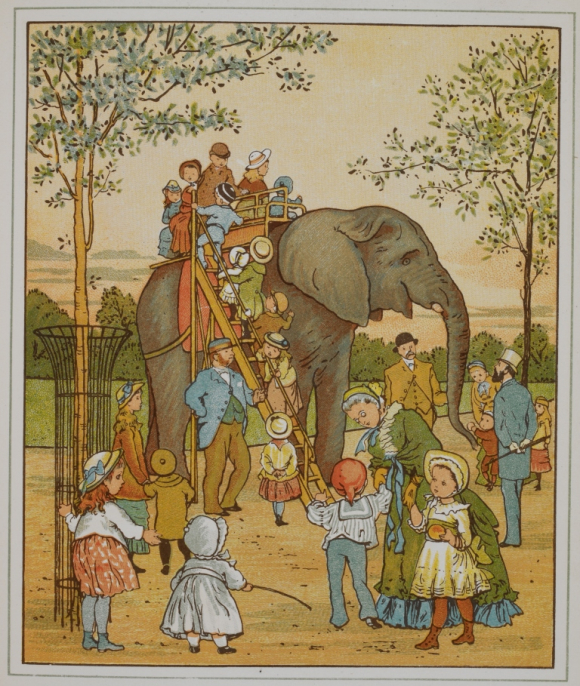 Children being given a ride on an elephant at London zoo from London Town  by Felix Leigh, illustrated by Thomas Crane and Ellen Houghton (1883) Images Online

Three hundred people arrived with a ticket, lured by the low price and the promise of seeing a parade of lions, tigers, bears and leopards.  The bewildered Zoo officials informed them that the gardens were not open to the general public on a Sunday – only fellows or members of the Society were admitted with their friends.  The ticket holders were not happy with this and the Zoo feared a riot was about to spark off.  An extra force of policemen was summoned to the gate and the crowd dispersed without further trouble.

London Zoo immediately started an investigation to discover who was responsible for the hoax.  They found that Sarah Marks, a bookseller in Houndsditch, had sold thirteen tickets.  The Zoological Society brought an action against Mrs Marks who was summoned to appear at the Mansion House ‘for that she, on the 29th of March did unlawfully and knowingly obtain, by certain false pretences, the sum of 1s 1d, with intent to cheat and defraud’.  The case was greeted with much amusement in court.

Sarah Marks had written a letter to the Society expressing her great regret for the foolish prank which had been instigated by her sons and promising that nothing of that kind would take place again at her establishment.  The Society accepted her apology and withdrew the summons. Mrs Marks was given a severe reprimand by Alderman Finnis and discharged.

Posted by Margaret.Makepeace at 09:00:00 in Conflict , Leisure