Bahrain is not in Ruritania: Colonel Prior and the ‘Royal’ Sheikh

When the Ruler of Bahrain began to adopt a distinctly regal style in 1940, Britain’s senior official in the Gulf moved quickly to nip the development in the bud.

On 7 February 1940 Sheikh Hamad bin Isa Al Khalifah announced in an official decree, or alan, that he had decided to institute a new honour, the Order of the Khalifah.  The order was to have three classes: Star, Decoration, and Medal, and the Sheikh stated that the decree was issued ‘By our royal pleasure’. 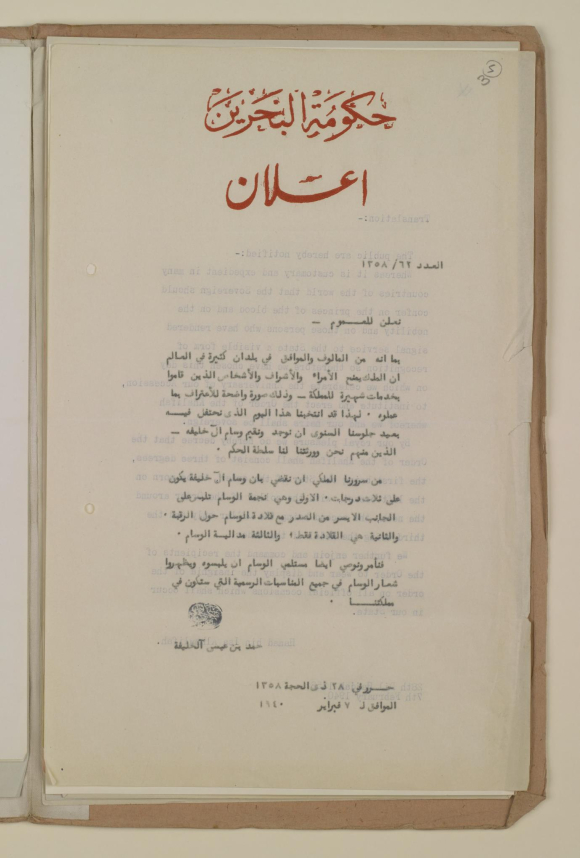 Three days later, the Political Agent in Bahrain, Hugh Weightman, reported ‘this rather silly idea’ to his boss, Lieutenant-Colonel Geoffrey Prior, the Political Resident in the Persian Gulf.  Prior was incensed.  He had complained to Weightman the previous November, following his last visit to the Sheikh, that he had been placed between two sofas, with the result that he found himself about a foot lower than the Sheikh.  He insisted then to Weightman that two seats of equal size should be arranged in future ‘as conversation between different planes is difficult’.

He had also seen a picture in Weightman’s office of the Sheikh sitting ‘on a sort of Woolworth throne’, while the Political Officer, Cole, ‘sat somewhere down by his coat tails in an ordinary chair’. He hoped that no Political Officer would ever put himself in such a ridiculous position again. 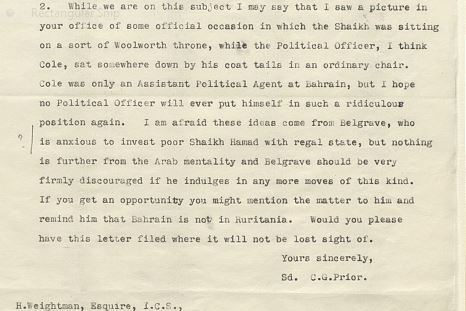 Colonel Prior writes to the Political Agent in Bahrain about the Sheikh of Bahrain’s ‘Woolworth throne’. IOR/L/PS/12/3927, f 25 (detail)

Prior suspected that the Sheikh’s regal pretensions came from Charles Belgrave, his British-born Adviser, and he told Weightman that the Sheikh needed to be reminded that ‘Bahrain is not in Ruritania’.

The India Office in London was also concerned to ensure that there should only be one ‘fount of honour’ in the British Empire, and as such an Indian ruler had recently been refused permission to institute an order of his own.  However, they recognised that the Sheikh of Bahrain enjoyed a rather more independent position.

Nevertheless, Prior was in no doubt that the Sheikh’s regal tendencies should be suppressed, and he went to Bahrain in March 1940 to interview both Belgrave and the Sheikh. 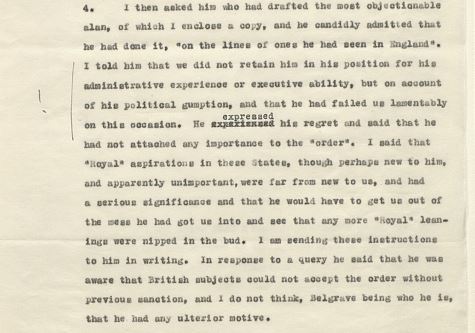 He first carpeted Belgrave, informing him that the British ‘did not retain him in his position for his administrative experience or executive ability, but on account of his political gumption, and that he had failed us lamentably on this occasion’.  He then sent for the Sheikh, raised the issue of the ‘odd alan’, and, reading it out, asked who the king referred to was.  Prior continues: ‘The Shaikh giggled rather feebly at this and said that people wrote these titles on the letters sent him and that as for the order, people liked these things’.

Prior then told the Sheikh that orders of chivalry were for great states and that people would laugh at Bahrain for instituting one.  When the Sheikh mentioned that Egypt and Iraq had them, Prior pointed out that Egypt was fourteen times bigger than Bahrain.  The Sheikh then ‘relapsed into a sepia cloud of patriotic protestations’

Bahrain achieved independence from Britain in 1971.  In 2002, the country’s Emir, also named Hamad bin Isa, and now at a safe distance from any risk of being ticked off by the British, declared himself King of Bahrain.

Posted by Margaret.Makepeace at 09:00:00 in Conflict , Middle East , Politics , Qatar