One of the joys of cataloguing an archive is that you never know what you might find.  At the beginning of this new tax year, we take a look at an unusual item found in the papers of Charles Canning, Governor General and Viceroy of India. 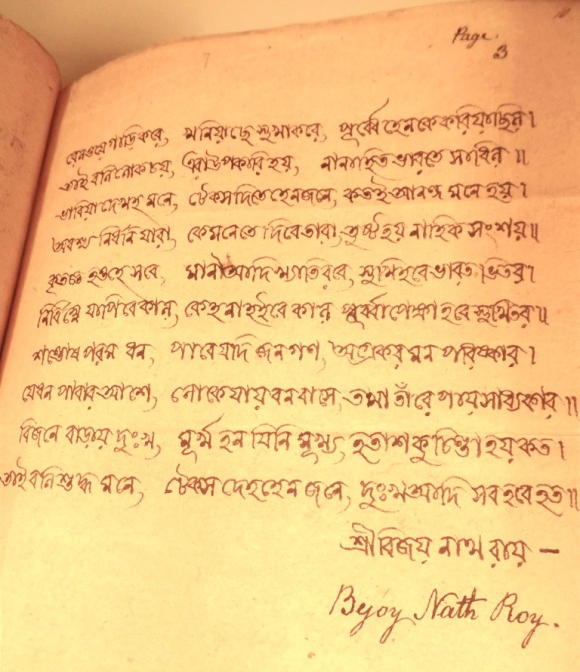 It can't be common to find a document in favour of taxation, let alone a poem singing the praises of a new Income Tax.  It becomes an even more astonishing find when that poem is written in Bengali and the author is identified as a fourteen year old schoolboy.  The poem and its translation are found amongst letters written to Governor General Charles Canning by Sir Henry Bartle Frere, Member of the Council of India.  It was originally sent to Frere by the Scottish missionary Dr Alexander Duff.  Duff had founded the General Assembly's Institution, later the Free Church Institution in 1830, with the aim of offering English language based education to middle and upper class Indians.  The Free Church Institution was affiliated with the University of Calcutta soon after its establishment in 1857. 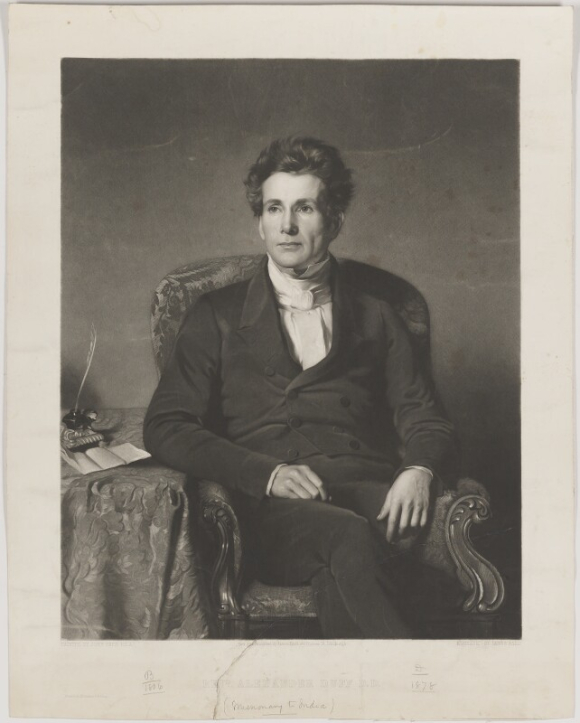 Frere writes that the poem's author, Bejoy Nath Roy is “rather famous in the School of the Free Kirk Institute as a writer of occasional poems” and that the boy's Master was “struck by the singular subject he had chosen”.  According to the translation, Bejoy Nath Roy writes “The Government wet with the dew of  mercy incurred debt only for the good of India“ ... “Let no-one grudge therefore to pay the tax”.  He uses the metaphor of the Government as a physician curing the nation, and having affected a cure, demands payment for services rendered. 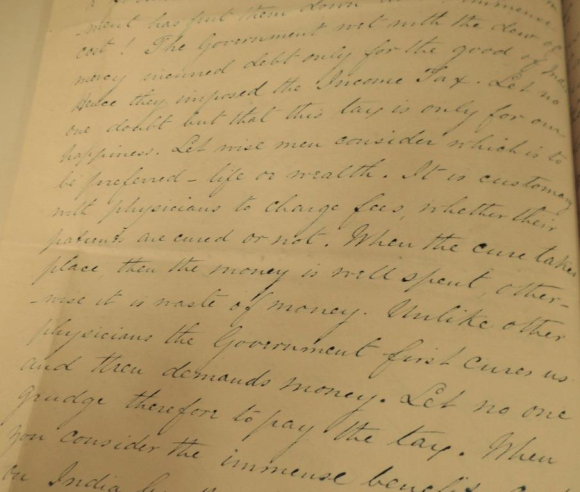 What happened in India in 1860 to inspire such words?  The country had spent the years 1857 and 1858 in the turmoil of the uprising known as the Indian Mutiny.  Indian finances had been in a parlous state even before the rebellion, but with the need for extra military expenditure, the deficit increased.  The economist James Wilson was appointed as a financial member of Council of India in 1859.  His plans to reform India's financial structures included a new Income Tax, as well as an adjustment to Customs Duties, a License Tax for traders, and a new paper currency.  Wilson's plans caused consternation in some quarters.  Sir Charles Trevelyan's outright hostility to the tax led to his recall back to England.   And the extent of the dreaded Income Tax?  A two percent levy on incomes between 200 and 500 rupees, and four percent above that.  In little over a year, and with the support of the Governor General, Wilson managed to lay the foundations of improved financial planning, budgeting and auditing, so much so that India's deficit had been reversed by 1862-63.  Wilson did not see it, he died of dysentery in August 1860.

The poem is a snapshot, shedding light on an unusual poetic subject.  Perhaps though it says less about attitudes to taxation and more gives us a glimpse of the 19th century Western education system within India, whereby particular attitudes towards the British and British administration were promulgated within schools.

And if anyone is aware what happened to aspiring poet Bejoy Nath Roy, please do let us know.

Posted by Margaret.Makepeace at 09:27:40 in Manuscripts , Money , Reform , South Asia

Posted by Margaret.Makepeace at 9:27 AM