During the First World War, the German Spring Offensives of March 1918 brought to an end three long years of attritional, trench-based warfare on the Western Front.  With little prospect of success on the Somme, the German generals switched their attention to Flanders.  Operation Georgette opened on 9 April 1918, aiming to drive the British and their allies back to the Channel Ports.  The opening offensive successfully targeted an under-strength Portuguese division in the front line near Neuve Chapelle.  Further attacks the following day resulted in the capture of Armentières and Messines. 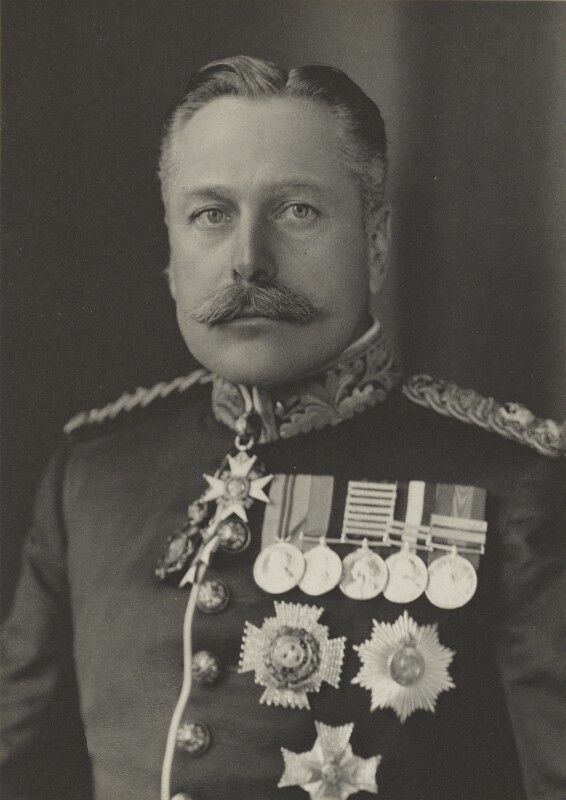 For the British, the situation was now critical.  The Commander in Chief Sir Douglas Haig, who remains a controversial figure, believed that the British and their allies needed to hold their ground while the French manoeuvred to come to their support.  On 11 April 1918, Haig issued a Special Order of the Day addressed to all ranks of the British Army in France and Flanders.  The order concluded with the now well-known exhortation:
‘There is no other course open to us but to fight it out.  Every position must be held to the last man: there must be no retirement.  With our backs to the wall and believing in the justice of our cause each one of us must fight on to the end.  The safety of our homes and the freedom of mankind alike depend upon the conduct of each one of us at this critical moment’.

A search of the British Newspaper Archive shows that the message was published in many UK newspapers on 13 April, usually printed verbatim and with very little in the way of commentary.  The headlines attached to it usually highlight what has come to be seen as the key phrase. 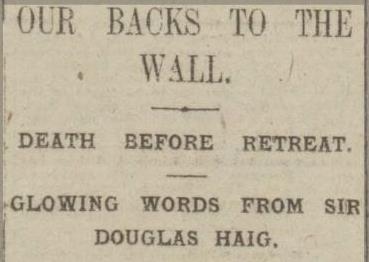 Not everyone serving in the line was enthusiastic.  For example, Second Lieutenant Huntly Gordon of A Battery, 112th Brigade, Royal Field Artillery, was at the time based near Méteren.  Gordon recalls that the Special Order arrived on 12 April via a runner and was received largely in silence:
‘I got the general idea; but somehow this modern version of the “little touch of Harry in the night” did not inspire me; in fact the rhetoric made me critical.  There was not the remotest contact between us and the Olympian figures at GHQ; there never had been.  How did he know how A/112 were placed?  It was almost two days since this circular had been signed and a good many walls had been given up during that time.  Against which particular walls must our backs now be placed?’

Haig later gave the manuscript of the Special Order to his private secretary, Sir Philip Sassoon (a cousin of the war poet).  After Sassoon’s death in 1939, it was bequeathed to the British Museum and it now forms part of the manuscript collections of the British Library (Add MS 45416).

There is one major difference between the holograph and the version eventually circulated to the Army.  The printed version omitted a final sentence, reading ‘Be of good cheer. The British Empire must win in the end’.