In the early 19th century there were many privately-owned burial grounds in London. One at St George-in-the-East in Stepney was leased in the 1830s by William Eastes who worked for the East India Company in London. Before joining the Company, William Eastes had been a schoolmaster in Kent. He rented the Dissenters’ Burial Ground which adjoined the small Anglican Trinity Chapel in Cannon Street Road, a source of income to supplement his wages as a warehouse commodore (foreman).

The ground was advertised as cheap and safe, with rates for an adult grave varying between 7s and 16s, and those for children under ten between 4s 6d and 8s.  All graves deeper than five feet were charge 6d per foot extra.  Deeper graves were perhaps a deterrent to body-snatchers.  In August 1830, two well-known resurrectionists were charged with attempting to steal the body of Mrs Brown from the Cannon Street Road burial ground.  George Robins and William Jones were arrested around midnight near the partly opened grave. The police found a sack, a shovel, and a long screw iron for opening coffins. The prisoners were committed to three months in the house of correction. 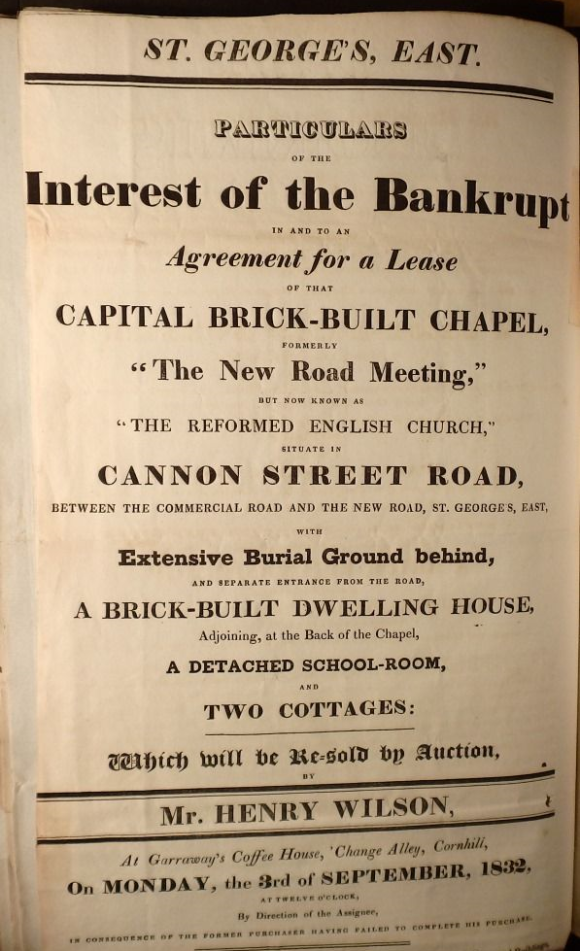 William Eastes also acted as clerk to the Reverend Thomas Boddington of Trinity Chapel.  In 1836 Boddington sold the Chapel to the Reverend James Harris, who found Eastes totally unfit for the situation. Harris wrote to the East India Company in May 1836, complaining of how the graveyard was run and accusing Eastes of vile and fearful abuse, gross language, and a violent demeanour.

Company warehouse-keeper William Johnson put Harris’s complaint to Eastes, a man ‘somewhat hasty in temper & likely to be violent in any matter of dispute’.  Eastes denied molesting Harris, claiming that he had merely been insisting on his right of way to the burial ground as specified in the lease.  Johnson concluded there was probably blame on both sides. The Company directors admonished Eastes and cautioned him as to his future conduct. 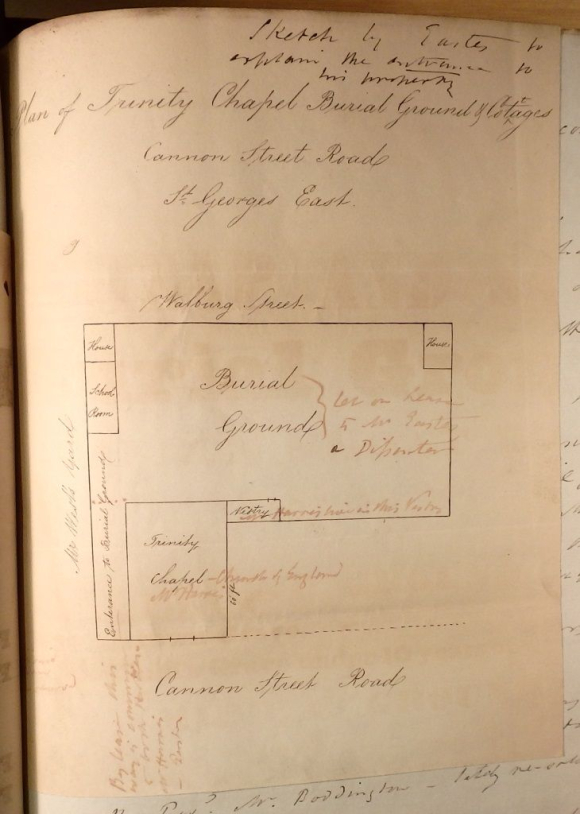 In October 1836, Harris renewed his complaint against Eastes: ‘There is no species of horrid language that this man does not apply to me and my family’.  There had been an altercation when a sheriff’s officer came looking for Harris about a debt he owed.  The Company’s Committee of Warehouses decided not to interfere any further in the dispute.

Harris and Eastes continued to be at odds.  In October 1838 a lascar seaman from an East India Company ship was buried in Eastes’ ground.  Newspapers described the funeral procession and burial, claiming that several thousand people assembled to witness the unfamiliar ceremonies performed by the dead man’s fellow lascars.  Harris was quick to dissociate himself from these events.  He made it known that the burial ground was not connected to Trinity Chapel but ‘leased to a Dissenter in the East India Company’s service, who puts on the surplice, reads the funeral service, and receives the fees consequent thereupon, his wife performing the part of sextoness.  The Rev Mr Harris … has nothing whatever to do with the ground in question, and of course took no part in this “Lascar burial”.’

Posted by Margaret.Makepeace at 08:30:00 in Conflict , Domestic life , Religion , Work