Anyone with an interest in early printed books should certainly celebrate the 150th anniversary of Robert Proctor’s birth. A debt of gratitude is owed to the librarian and bibliographer, who had a special talent for identifying early printing types and on that basis consolidated a method for arranging incunabula, books printed in the 15th century.

Proctor disappeared in September 1903 whilst hiking in the Tyrol, but his work during his short energetic life did much to make a science of bibliography. The impact of the publication of his Index to the Early Printed Books in the British Museum was figuratively likened to "the launching of HMS Dreadnought". The 'Proctor Order' is still used, giving numbers to printed items arranged geographically and chronologically: first by country, in printing order; then within each country by town, chronologically; then within each town by printer.

When we are struck by the accomplishments of remarkable people, it’s natural to look for the things that made them click. Proctor’s Diaries written from 1899-1903, provide insights into his day-to-day work, his interests, joys, frustrations, thoughts and opinions. Today Twitter serves this function for many librarians, and so to celebrate Proctor’s birthday we thought we might gift him a Twitter account! What might he have tweeted? 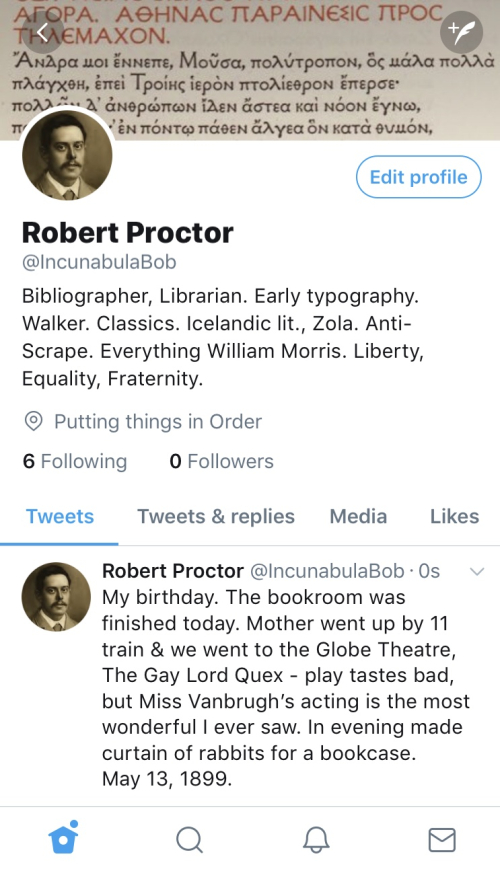 Proctor’s energy and industry is immediately apparent when reading his diaries. We might wonder if he had some kind of thaasophobia – he was never idle. He could have been a prolific Tweeter.

As a librarian he documented his work at the British Museum: cataloguing, acquisitions, visitor interviews, and work on the printed subject index. He also recorded the weather, often with a touch of poetry, aware of its natural magic and dynamism. He could be expected to have tweeted images from the books he worked with, but it’s often illuminating to look at the other interests of people normally associated with a particular area.

For instance, Proctor lived in a house with his mother, and loved gardening. We picture him setting wire fences, chopping logs, picking flowers and making jam. 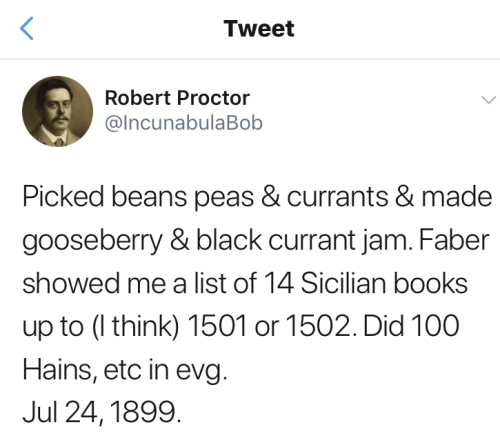 He recorded the books he read on train journeys and those he read to his mother; he could have tweeted, “#amreading Zola (to mother)”. Proctor kept up his diary during his holidays, and these contain succinct (tweetable) reviews: “not to be commended, but certainly cheap”, “landlord excellent” etc.

Some diaries and much of social media can be mundane and turgid. The interesting stuff comes with those things that reflect the deeper and more meaningful sides of a character. Proctor’s diaries offer an interesting record of his views and opinions. It is well known that Proctor was greatly influenced by the aesthetics and politics of his idol William Morris and we see plenty of examples of Proctor’s ‘radicalism’. 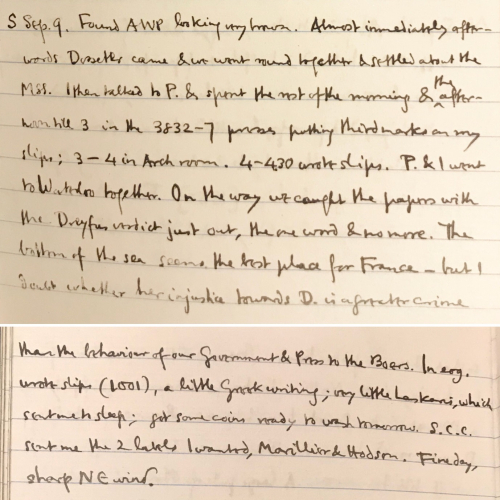 "The bottom of the sea seems the best place for France - but I doubt whether her injustice towards Dreyfus is a greater crime than the behaviour of our Government & Press to the Boers", diary entry for 9 Sep 1899. Add MS 50190-50196.

Many people with social media accounts which identify an employer state in their profiles, ‘opinions my own’ or ‘not tweeting in an official capacity’. Had Proctor taken to Twitter, the British Museum’s Department of Printed Books may just have insisted on this for @IncunabulaBob: on March 7th 1900 Proctor wrote “London much excited because the loathsome Fatguts is defiling it. She is going to Ireland – may she leave her damned bones there.” 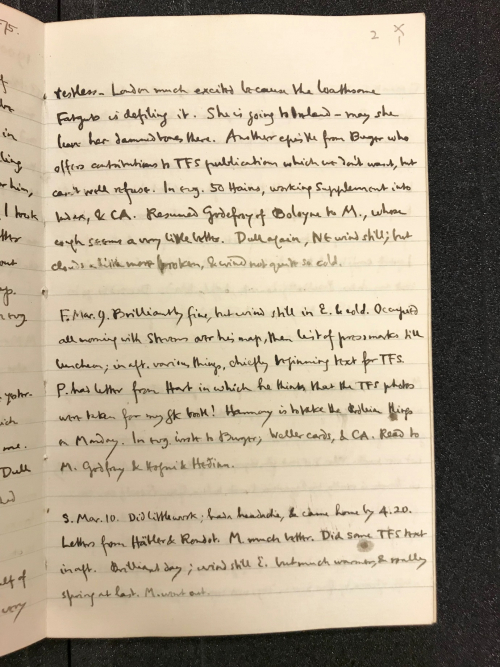 Fatguts, and 'the Old Washerwoman of Windsor', were Proctor's insulting names for Queen Victoria.

Other pages in Proctor's diaries display quite touching gestures of his sincere beliefs. 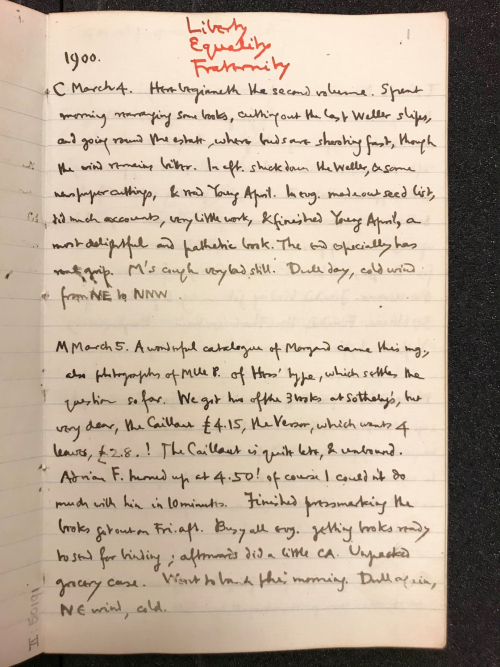 Liberty, Equality, Fraternity written in red pen at the top of the first page of the second volume of Proctor's diaries.

The Private Diary of Robert Proctor. Reprinted from the Transactions of the Bibliographical Society 1951.010856.k.6