May Day in the Olden Time

Today we bring you another surprising discovery from the India Office Records.  In a volume of correspondence for the Surveyor’s Department in 1868 is a report on a watercolour painting entitled May Day in the Olden Time by Henry Stacy Marks. 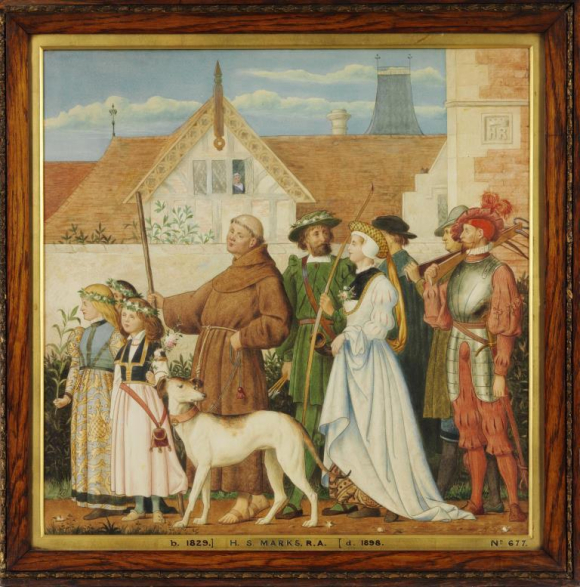 Panel of a triptych watercolour painting by Henry Stacy Marks entitled May Day in the Olden Time, 1867 © Victoria and Albert Museum, London  FA.677

The appraisal is the subject of a letter written by Matthew Digby Wyatt, India Office Surveyor, to Henry Cole, director of the South Kensington Museum.  Cole had asked Wyatt to visit the Dudley Gallery to inspect Marks’ painting because the Department of Science and Art was interested in reproducing it as a mural decoration for the Museum.  The procession of 16th-century figures in May Day in the Olden Time was described by one contemporary critic as ‘a favourable example of Mr Marks’s transition manner –a  manner which lies halfway between an easel-picture and a wall-picture, which reconciles a figure composition to the conditions of architectural construction and the requirements of mural decoration’.

Not everyone who viewed the painting at the Dudley Gallery was appreciative.  The London Daily News wrote of ‘general quaintness and affected imbecility’.  Wyatt reported to Cole : ‘In my opinion its artistic merit is considerable as it is well composed and with the exception of a few faults in proportion of parts of some of the figures, carefully drawn in a somewhat conventional manner, while the subject is cheerful, suitable as a picture for a private room of moderate dimensions, and treated with less caricature than this Artist is generally in the habit of introducing into his work’.

Wyatt did not think the asking price of £168 was excessive and went on to consider two aspects of the painting’s suitability: the subject matter and the technical fitness for reproduction.  Wyatt was struck by ‘the want of harmony between the subject and the scope of such an institution’ as the Museum.  He thought a ‘graver aim’ would be more desirable.  However he believed that the painting was technically ideal for copying onto earthenware slabs or plaques, indeed it ‘seemed expressly intended for some such object’.  In conclusion, Wyatt suggested that Marks should be commissioned to design a composition in the same style but limited to a much smaller number of figures.

The Department of Science and Art did purchase May Day in the Olden Time and it is now in the collections of the Victoria and Albert Museum. The painting was copied onto three porcelain panels by a student from the South Kensington Art School.  The panels were then incorporated into a decorative buffet placed in the Green Dining Room of the Museum.

Posted by Margaret.Makepeace at 09:00:00 in Arts and crafts , Visual arts