The Anti-German Union and the India Office

A file among the records of the India Office Public & Judicial Department shows how the anti-German hysteria that developed in Britain after the outbreak of the First World War came to spread as far as central India. 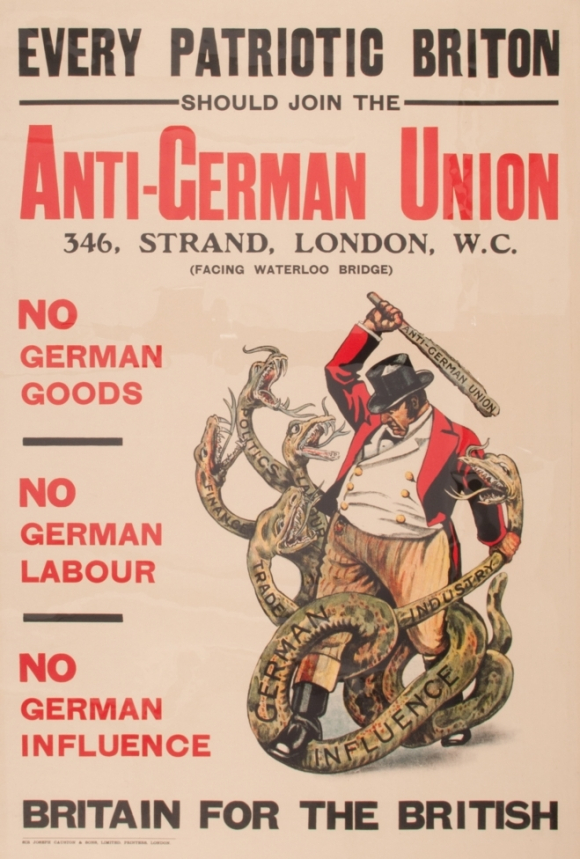 George Makrill was Honorary Secretary of the Anti-German Union  - motto: ‘No German Labour, No German Goods, No German Influence, Britain for the British'.  On 9 August 1915 he wrote to the India Office from the Union's headquarters on The Strand concerning ‘... certain information, which I have received from a source which I know to be trustworthy, and which appears to me to require immediate action’.

This potentially grave matter was then left hanging, as Makrill had forgotten to include in this initial communication a short list of persons with German connections who had worked or were working in the Central Provinces administration.  This was dispatched, with apologies, on 26 August.

The India Office thus found itself tasked with investigating four of its own civil servants:
• the late Sir Arthur Blumerhassett, former Chief Secretary - what damage might he have done the Allied cause before his death?
• Mr Marten, his successor - had he been ‘turned’ by Sir Arthur?
• Mr Grille, Assistant Commissioner - was he part of the conspiracy?
• Mr Hullah, Third Secretary  - what was his nefarious role?

Mr Makrill might himself have done some elementary checking prior to alerting the India Office, given that he must have meant Sir Arthur Blennerhassett who had died in late January.  It was soon established that the four individuals were all Oxbridge graduates, which before the Cambridge spy ring scandal erupted decades later must presumably have worked in their favour.  Departmental Secretary Malcolm Seton (Repton and Oriel College, Oxford) took it upon himself to deal with the matter, putting the laconic note in the file on 2 September : ‘Mr. J. T. Marten has a German mother, but the Martens are an old Gloucestershire family.  I have known him intimately for over 20 years.  He has always been rather anti-German in feeling’.  He was plainly not impressed by the error over the Blennerhassett surname: ‘Burke or Debrett could have been consulted’.

In retrospect it is clear that the whole episode stemmed from the Anti-German Union having somehow discovered that a handful of overseas civil servants had some German ancestry and/or had married German wives, and were keen for the India Office to investigate their backgrounds.  Seton’s sense of exasperation is plain in another written comment: ‘If the Anti-German Union hopes to proscribe every official who has German blood, its labours will be protracted’.  No further action seems to have taken place, and Messrs Marten (Clifton and New College, Oxford), Grille (Harrow and Jesus, Cambridge) and Hullah (Oundle and Caius College, Cambridge) were sensibly allowed to continue their careers unmolested.

Posted by Margaret.Makepeace at 09:00:00 in Politics , Propaganda , South Asia , World War One