‘Who on Earth is Anthony Meyer?’

Unless you are a political anorak, or one of his constituents, Sir Anthony Meyer’s long, but low key, parliamentary career probably passed under your radar.  However, in November 1989 he was briefly one of the best known men in the country.  His challenge to Margaret Thatcher for the leadership of the Conservative Party, and by extension the prime ministership, captured the public’s imagination: the backbencher versus the ‘Iron Lady’, albeit a backbencher who was ex-Eton, ex-Oxford, ex-Guards, and a baronet to boot.  Meyer was portrayed as David to Thatcher’s Goliath. 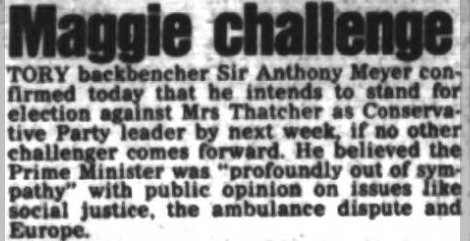 The British Library recently acquired the thousands of letters Meyer received at the time of the challenge. They are overwhelmingly supportive.  Constituents, non-constituents, Conservative supporters, supporters of other parties, and the apolitical alike lauded his courage and criticised both Thatcher’s leadership style which they saw as increasingly arrogant and autocratic, and her policies, especially the poll tax and water privatisation.  However, Meyer also received a large number of letters opposing his challenge, and it these letters that make most interesting, and let’s face it, most fun, reading.

The opposition to Meyer’s challenge broke down into distinct categories.  The more considered correspondents picked apart his views on Europe and the economy and insisted that Meyer would divide the party, handing encouragement, and possibly the next election, to Labour.  Others preferred to focus on Thatcher herself, both in a political sense - 'the best Prime Minister we have ever had' - and a personal one - 'the greatest woman who has ever lived on the Planet Earth'; 'neat, wears right clothes and is attractive'.  One cannot help feeling that the latter were hardly prerequisites for leading the country.

Some correspondents attacked Meyer the man rather than his message.  He was a nonentity, the unpopular boy at school trying to get noticed.  He was ordered to 'Stop showing off!' and put a stop to his 'childish antics'.  Much was made of Meyer’s low-key career: 'WHO ON EARTH IS anthony meyer?'; 'Dear Sir Anthony Who!!!'   His opponents dispensed with such niceties as getting his name right.  One card was addressed to Sir Thomas Meyers but he was also Myers, Myer, Myner, Mayer.  To be fair, even some of his supporters wrote to Sir Peter, Sir Ian, Sir Robert, Sir Charles, Sir William, and Sir Alfred.

Another category of opponent comprised those who saw Meyer’s challenge as treachery.  He was likened to Julius Caesar’s assassins, Judas, and memorably one letter writer reckoned Meyer 'and Quisling would have been ‘good pals'.  Finally, there were those who simply resorted to personal abuse, but even this had a genteel feel to it.  'Silly old twit', 'a DRIP of the first water', and 'your [sic] nuts' was about as bad as it got.  Even the correspondent who told him to 'get lost' prefaced it, very politely, with 'kindly'.

As a ‘stalking horse’ candidate (predictably changed to 'stalking donkey' and 'stalking sheep' by his opponents) Meyer was never expected to win, and he did not.  He was resoundingly defeated by 314 votes to 33 but, as was the plan, he laid the groundwork for a party ‘big gun’ to mount another challenge at a later date.  Less than 12 months later Margaret Thatcher resigned as Conservative party leader and Prime Minister.

Posted by Margaret.Makepeace at 09:00:00 in Conflict , Manuscripts , Politics