British-US rivalry in the race to discover oil in Iraq

How the race to discover ‘the biggest remaining oil possibilities in the world’ led to the British Government’s belief that an American oil company had helped secretly fund the Iraqi revolt against British occupation in 1920. 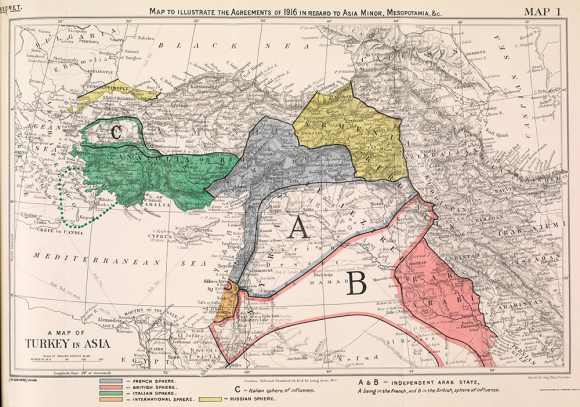 In the aftermath of the First World War, much of the defeated Ottoman Empire’s dominions were carved up between the War’s victors. In the case of Mesopotamia [Iraq], this meant military occupation and administration by the British.

The British Government saw great strategic and commercial value in Mesopotamia, thanks in part to the significant oil reserves they believed it to possess. Britain already had an effective monopoly on oil exploration and production in neighbouring Persia [Iran], through the operations of the Anglo-Persian Oil Company. But at the end of the First World War, foreign oil companies were also eager to discover oil reserves in Mesopotamia.

The two major players in Mesopotamia in 1919 were the British Anglo-Saxon Oil Company (ASOC, now part of Royal Dutch Shell) and the American Standard Oil Company of New York (SONY). The stakes were high. In a letter intercepted by British censors, one of the two geologists sent by SONY to explore Mesopotamia reported to a relative that he was on his way to find ‘the biggest remaining oil possibilities in the world’.

Naturally the British Government favoured British interests over American, but could not be seen to be giving preference to one over the other. The solution was to request that both companies halt their exploration work, explaining that while Mesopotamia remained under military occupation, oil exploration could be conducted for military purposes only. In the meantime, ASOC’s geologists were retained by the military, and their work paid for by British military funds. 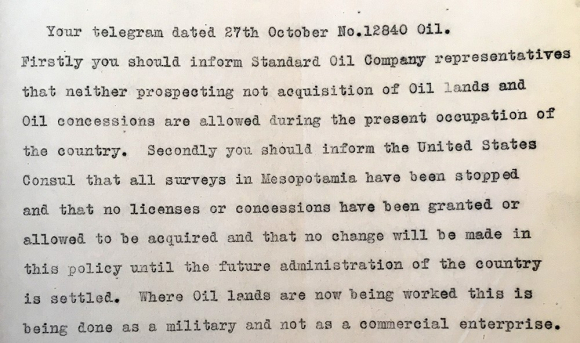 The frustrations of the two SONY geologists, stuck in Baghdad and unable to carry out their work, is made clear in another intercepted letter, written in June 1920 by one of the geologists to his fiancé. ‘If you know the inside history of this you will find that the British have held up […] American firms from doing business in places conquered by the British while we were doing their fighting in France’ he wrote. 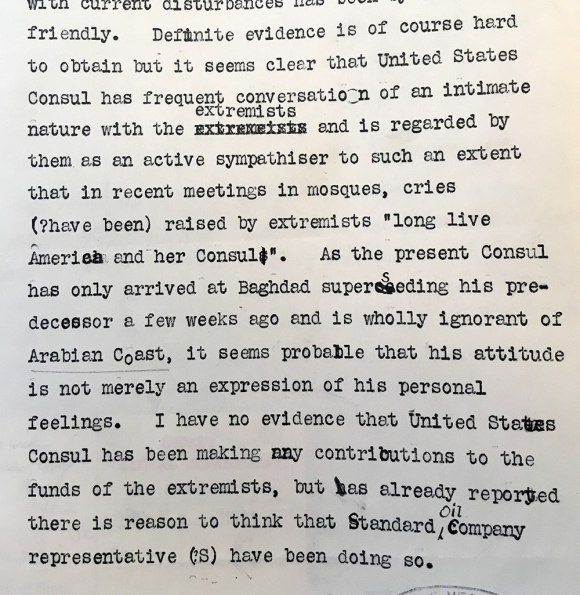 Extract of a telegram sent by the British Civil Commissioner in Baghdad, to the Secretary of State for Foreign Affairs, 3 August 1920. IOR/L/PS/10/556, f 29

By this time angry Iraqis were on the streets, protesting against Britain’s continued occupation of their country, two years after the end of the War. The intercepted geologist’s letter affirmed the Civil Commissioner in Mesopotamia’s belief that SONY were financing the anti-British movement in Mesopotamia. In a secret telegram sent to Foreign Secretary Lord Curzon in August 1920, the Commissioner further wrote it was ‘clear that [the] United States Consul has frequent conversation of an intimate nature with extremists to such an extent that in recent meetings in mosques, cries have been raised by extremists “long live America and her Consul”’.

The British officials involved conceded that they had no concrete proof to back up any of their suspicions and accusations. Nevertheless, Curzon felt it ‘desirable that any avenue that might lead to proof, should be kept open’.

Posted by Margaret.Makepeace at 09:34:15 in Business , Conflict , Politics , Qatar , Science and environment , World War One

Posted by Margaret.Makepeace at 9:34 AM