In February 1935, the British Consul in Damascus, Gilbert Mackereth, wrote to his superiors at the Foreign Office in London with a dilemma.  Since 1926, the Consulate had been responsible for making cash payments to a number of destitute British Indian subjects living in Syria, but nine years later, the funds allocated for this purpose by the British Government of India were beginning to run out, and Mackereth was unsure how he ought to proceed. 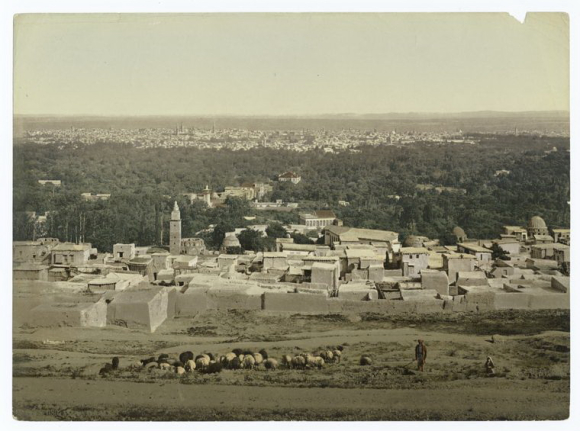 The Indian community in Syria at this time was concentrated in Beit Sawa, a village in Ghouta, an important agricultural region east of Damascus.  This area had suffered extensive damage during France’s suppression of the Syrian national uprising (1925-27) which included the use of aerial bombardment and the burning of villages.  As a result, many of the ancient irrigation canals in Ghouta – upon which it depended for its prosperity – had been diverted or destroyed beyond repair.  No compensation was paid to the area’s inhabitants and this led some of the Indian community resident there to leave for Palestine and Iraq.  According to Mackereth, those who had been unable to leave and remained living in the area, did so 'on the borderline of misery' and therefore were in no position to 'help their even more unfortunate sisters who receive alms from the Indian Government'. 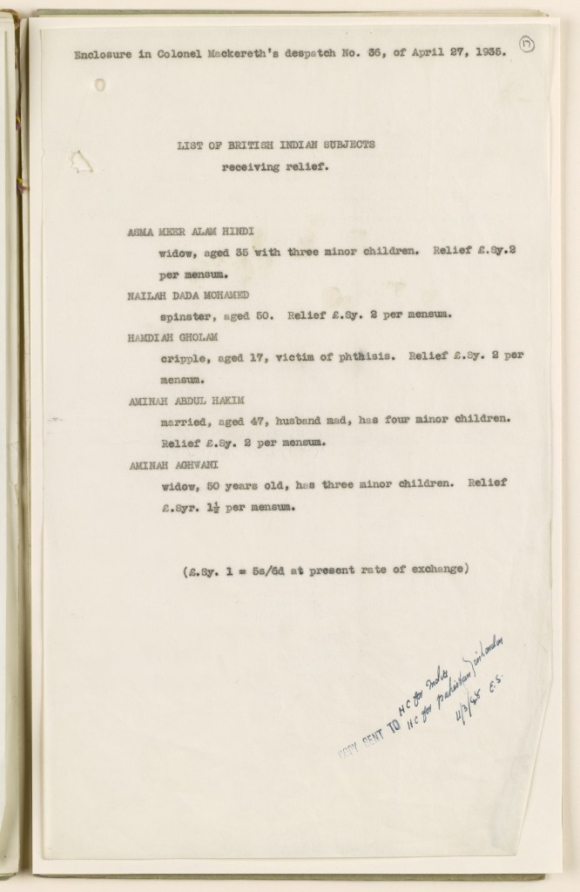 At this time, the payments were being made to only five surviving women, all of whom were reported to be absolutely destitute and 'either aged or crippled'.  This led Mackereth to argue that it would 'be a hardship amounting to almost cruelty' if the 'meagre alms they enjoy from the India treasury' were stopped.  He proposed that either the payments should continue to be made or that the women and their minor children be repatriated to India where they could be 'cared for under the poor laws of that country'. 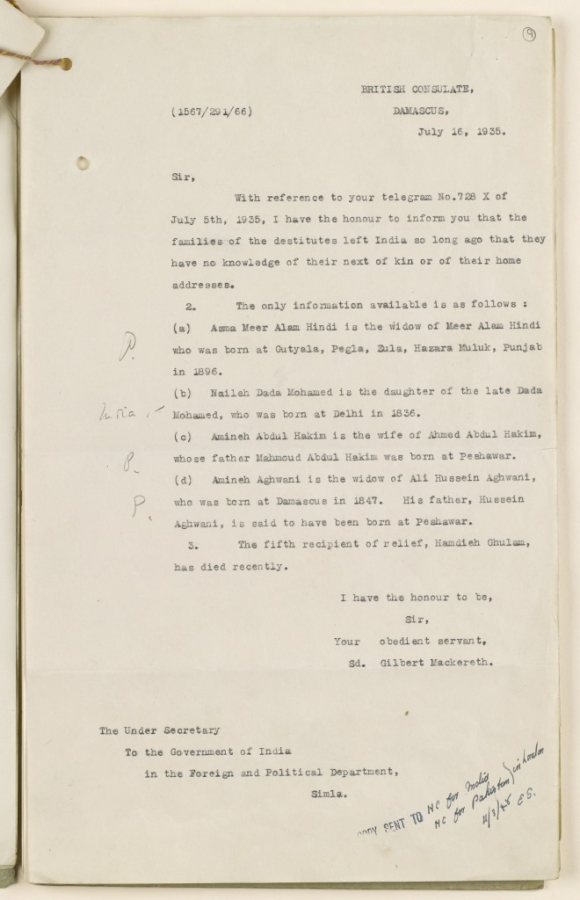 By July 1935, one of the five women, Hamdieh Ghulam, had died and Mackereth had established that the families of the four remaining women had 'left India so long ago that they have no knowledge of their next of kin or of their home addresses'.  This prompted the Government of India to eventually decide that it would be better to leave the women 'in Damascus, where they must have made contacts, than to repatriate them to India where they appear to have no relatives or friends and in the absence of any Poor Law administration would starve'.  However, it was not prepared to extend any financial assistance to the women’s children, whom it argued 'should be regarded as Syrians and not Indians'.  It was eventually agreed that the remaining four women would be paid the amount of 200 piastres a month for the remainder of their lives, an amount that constituted 'barely the subsistence level'.  Once this administrative quandary had been solved, the correspondence regarding these women dries up and hence the fate of them and their children after this point is unknown.

All of the letters referenced in this post are contained in the India Office Records file IOR/L/PS/12/2141 that is held at the British Library.  The file has now been digitized and is available on the Qatar Digital Library.