The letters of Jonathan Swift and Henrietta Howard

To celebrate the launch of Discovering Literature: Restoration and 18th Century, Untold Lives takes a closer look at the letters of Jonathan Swift to Henrietta Howard.

Jonathan Swift was an Anglo-Irish satirist, essayist, poet and Dean of St Patrick’s Cathedral, Dublin, chiefly remembered today as the author of Gulliver’s Travels, published in 1726. Henrietta Howard, afterwards Countess of Suffolk, was a Lady of the Bedchamber to Queen Caroline and mistress to George II. She was noted for her wit and intelligence and she corresponded with many intellectuals of the day, including not only Swift, but Horace Walpole, Alexander Pope and John Gay. At the British Library we hold a series of autograph letters between Swift and Howard, written between 1726 and 1730 (Add MS 22625), which give fascinating insight into the relationship between these two figures. 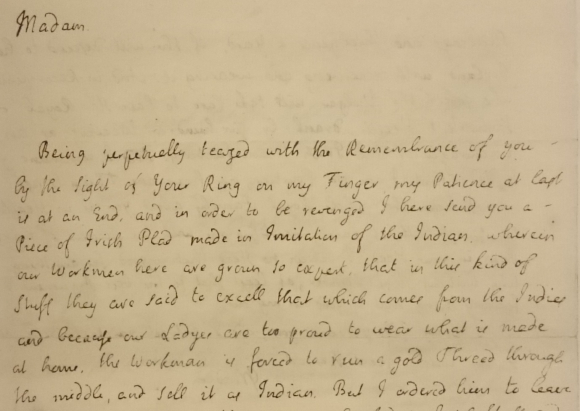 Henrietta was a supporter of Swift and his works, and their letters have a playful tone. Writing as Gulliver, Swift begs leave ‘to lay the crown of Lilliput at your feet as a small acknowledgement of your favours to my book and person’, and in one letter he tells her how he is being ‘perpetually teased with the remembrance of you by the light of your Ring on my Finger’.

But Swift was not writing out of pure friendship and admiration. As the letters progress his ulterior motives become clear.

Queen Anne had disliked Swift and she would not consent to a church appointment for him anywhere in England. However, St. Patrick’s Cathedral, Dublin, was outside of the Queen’s gift, so she had no way of preventing his appointment as Dean in 1713. Swift was unhappy in Dublin and he wished to have a more high profile post in England. So when George II and Caroline came to the throne, he hoped to persuade Henrietta to use her influence at court to raise his position in the eyes of the royal couple, so he would get the job he wanted.

Henrietta’s position was a difficult one. Queen Caroline and Henrietta were friends, but Henrietta was also the King’s mistress. The Queen could not allow Henrietta to undermine her and she made sure Henrietta’s influence remained limited.

When Henrietta failed to secure Swift the lucrative position he so desired, the letters soon take on a sour tone. He tells her that whilst others considers her sincere, he believes she only has ‘as much of that Virtue as could be expected in a Lady, a Courtier and a Favourite’, and given that ‘Friendship, Truth, Sincerity’ are ‘lower morals, which are altogether useless at Courts’, then he does not think her to be a very sincere and honest friend at all.

Swift never did procure himself another position, and remained as Dean of St Patrick’s Cathedral until his death in 1745.

If you would like to learn more about this collection and the works of Jonathan Swift, you can visit the British Library's Discovering Literature: Restoration and 18th-Century Literature website. Here you can view these letters along with early printed editions of Swift’s work, as well as the works of many other Restoration and 18th-century writers including Aphra Behn, Daniel Defoe and John Milton.

Posted by Catherine Angerson at 09:00:00 in Literature , Manuscripts , Modern history