Sarah Sophia Banks was the sister of Joseph Banks, botanist on James Cook’s first voyage and later president of the Royal Society.  Her scrapbook on ballooning displays the importance of spectacle to scientific endeavour at the end of the 18th century.

The Cook voyages were linked in the popular imagination to the science of exploration, as well as to the sensational and the spectacular. This convergence of science and spectacle was similarly present in the mania for hot air ballooning which captured the public’s imagination. Balloons became reflective of fashionable excess, flightiness of manner, and sexual exploits in a way that echoes the reflective spectacle surrounding exploration narratives and fiction following the Cook voyages.

Sarah Sophia Banks’s ballooning scrapbook contains satire, informative illustrations, and discussions of ballooning from a number of angles, including political, militaristic, artistic, and fashionable. There are newspaper clippings and depictions of the major figures in aeronautics at the time. The famous aeronaut Lunardi was known for his spectacular feats of aeronautics that engaged in both the science of experimentation and in the spectacle of performance. 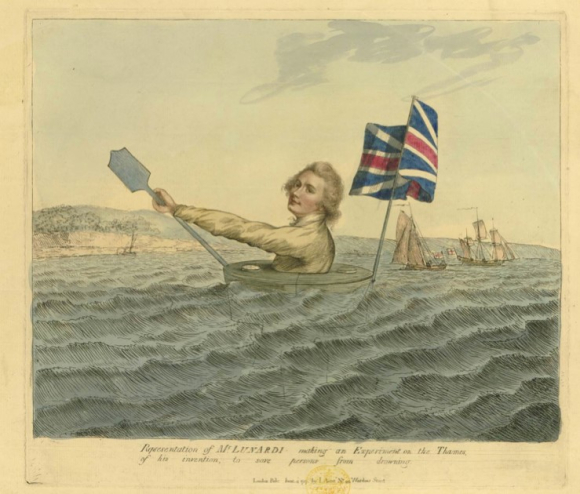 This image depicts Lunardi ‘making an Experiment on the Thames of his invention to save persons from drowning’.  It displays the drama and the spectacle of ‘experiments’ which attempted to use the science of aeronautics for the benefit of the public.  However, it also highlights the sensational, nationalistic, and Romantic aspects of this seemingly benevolent effort.

The angles of the image, from that of Lunardi’s oar to the Thames’s waves, convey a sweeping sense of motion.  Amidst this, however, Lunardi remains graceful and undisturbed by the wind that blows the flag behind his head.  His face serene, his chin held high, Lunardi is the image of the Romantic, both amidst and above the elements surrounding him, contemplating, yet unfazed by, the dangers of aeronautic experimentation.  The United Kingdom’s flag attached to his small vessel, and the boats flying the Cross of St. George in the background, display the nationalistic undertones of the mania for ballooning, in spite of the foreign spectacle that Lunardi and other Italian aeronauts had come to represent.

Overall, the print, though illustrating Lunardi’s ‘experiment’ more effectively illustrates its sensational value as a popular spectacle. Lunardi’s handsome appearance as he paddles his small craft nobly and bravely over the turbulent waters of the Thames is illustrative of the inextricable nature of science and spectacle in the mania for ballooning and its representation in mass media culture. 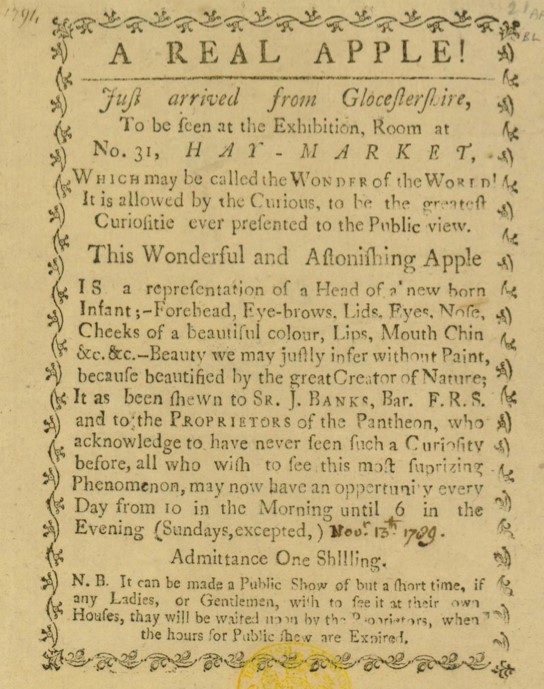 Sarah Banks’s scrapbook becomes increasingly interesting as she brings in other forms of spectacle in the latter portion.  The account of the ‘wonderful and astonishing apple’ blurs this line between spectacle and science.  The advertisement for this apple that bears resemblance to the head of an infant garners a sort of authority and scientific status by claiming to have been shown to Joseph Banks.  Sarah Banks’s scrapbook as a whole demonstrates that the spectacular is of particular importance to the science of ballooning and other forms of exploration and discovery. 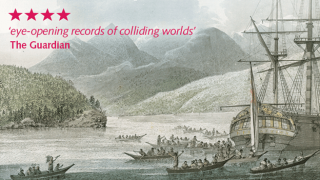 Posted by Margaret.Makepeace at 11:25:10 in Captain Cook , Science , Women's histories

Posted by Margaret.Makepeace at 11:25 AM