On 27 August 1939, the explorer Bertram Thomas sent a telegram to John Charles Walton of the India Office, offering his services to the Government of India in the event of war, in the Persian Gulf ‘or wherever my Arab experience may be of use’. 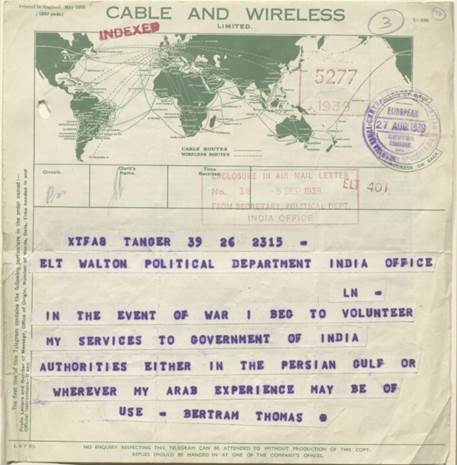 Telegram from Bertram Thomas to John Charles Walton at the India Office, 27 August 1939 (IOR/L/PS/12/300, f 72). The copyright status is unknown. Please contact copyright@bl.uk with any information you have regarding this item.

In 1931, Thomas had become the first European to cross the ‘empty quarter’ (the Rub' al Khali desert) of Arabia.  He had also served in Mesopotamia (Iraq) during the First World War, and had held offices in the Middle East including that of Financial Adviser to the Sultan of Muscat and Oman. After the declaration of war on Germany on 3 September 1939, Thomas wrote to the Foreign Office enquiring whether he could be of use to them in Iraq or elsewhere in the Middle East, in case the Government of India could not find a suitable role for him.  He stated ‘I want to serve the country’ and ‘I should feel wretched to be idling when I ought to be helping somewhere’.  He suggested that ‘I might be the sort of man the new Department of Propaganda has a use for, collecting information on the spot, or disseminating it there’.  Herbert Lacy Baggallay of the Foreign Office passed on Thomas’s letter to the Ministry of Information, remarking that Thomas’s ‘knowledge of Arabic and of Arab countries is, of course, very considerable’.

On 30 July 1941 the Ministry of Information offered Thomas the role of Publicity Officer in the Persian Gulf, responsible for the preparation and co-ordination of pro-British and Allied propaganda in the Gulf.  Thomas served in this role until he became first Director of the new Middle East Centre for Arabic Studies, a centre for training British personnel in the Middle East.  He held this post from 1944 to 1948.

Other individuals offered their services to the India Office and the Foreign Office during the Second World War including the mountaineer and author Frank Symthe (Francis Sydney Smythe).  Smythe had led the 1931 expedition which conquered the Himalayan mountain Kamet, the first summit over 25,000 feet (7,620 metres) to be climbed.  He had also taken part in Everest expeditions, including the 1933 expedition which equalled the height record (c 28,000 feet or 8,534 metres) established by Edward Felix Norton in 1924.

Symthe wrote to Walton at the India Office on 23 September 1939 that he was ‘anxious to undertake some work in which any special qualifications I may possess would be of the most use’.  In a further letter of 11 August 1941, he stated that ‘since the German attack on Russia the Indian frontier again becomes important’, and he suggested that he could train a corps of mountain scouts drawn from Gurkhas and Sherpas. It appears that Smythe never served on the Indian frontier, but he did spend part of the Second World War training troops in mountain warfare and spent time in the Rockies with the Lovat Scouts.