A soldier’s wife in the Crimea

On a recent visit to the Green Howards Museum in Richmond Yorkshire, I was particularly taken with an article on display from the regimental magazine for 1895.  It was a first-hand account of the Crimean War by a soldier’s wife.  I found a copy in the British Library and it makes fascinating reading. 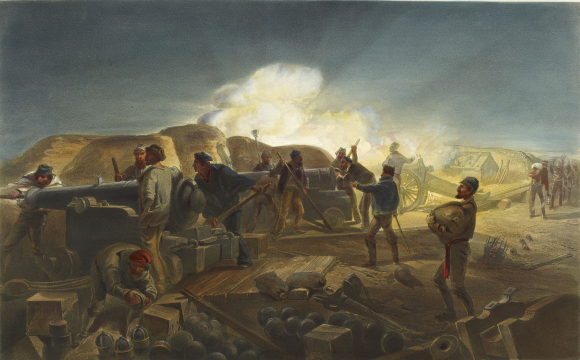 'A hot night in the Batteries'. Soldiers loading and firing cannons, during the Crimean War – from William Simpson and E Walker, The Seat of War in the East (London, 1855-1856) Images Online

Margaret Kerwin’s story was published in “Ours” – The Green Howards’ Gazette in 1895.  Margaret was the wife of Private John Kerwin of the 19th Regiment of Foot.  John was born in Carlow Ireland and he had enlisted in the British Army in February 1843 at the age of 20.  His first overseas posting was to North America where he served for nearly three years.

On 28 March 1854 Britain and France declared war on Russia. In April, the soldiers of the 19th Regiment who were stationed at the Tower of London were ordered to the Crimea.  People waved their handkerchiefs and threw oranges at the cheering soldiers as they left the Tower.  Margaret and fourteen other women went with the men on their journey.

Having sailed to Scutari, the regiment moved to Varna and then marched on foot to Devna.  Margaret bought a washing tub and carried it on her head with her cooking equipment inside.  She also carried a water bottle and a haversack with biscuits.  As they marched, men were overcome by the heat, and Margaret was kept busy providing them with drink.  In camp she was given the job of washing the clothes of 101 men, standing in a stream for twelve hours a day for very little payment.

Cholera and ‘black fever’ struck, killing large numbers of men.  Margaret fell seriously ill but her husband John had to leave her to fight in the Battle of Alma.  She was taken to the hospital at Varna where she received word that John had survived with just a slight wound.  Margaret refused to be sent back to England, and when she eventually recovered she was appointed as nurse at the hospital.

When the hospital was disbanded, Margaret sailed to Balaclava where she was reunited with John.  Shortly afterwards, the couple were ordered up to the front.  Margaret had a narrow escape when four shells exploded in her tent as she was on her knees ironing, her pet goat lying beside her.  A dozen shirts she was washing for Mr Beans were riddled with holes.

In November 1854, Margaret saw the Battle of Inkerman from Cathcart’s Hill.  She then had another brush with death when a Russian pistol held by a British sergeant went off unexpectedly and knocked the bonnet off her head.  Margaret was stunned but unharmed.

Having survived the Crimean campaign, John Kerwin went on to serve for seven years in India.  He was discharged from the Army in 1864 on a pension of 1s ½d, suffering from rheumatism.  John and Margaret returned to Carlow and lived to old age.  Her account of her experiences given in the 1890s ends: ‘If I was young to-morrow, I would take the same travels, but I would be a little wiser’.