Spence Broughton was a highwayman executed for robbing the Sheffield and Rotherham mail in 1792.  His body was gibbeted on Attercliffe Common and, notoriously, it hung there for 36 years.  Thousands flocked to see this gory spectacle and it has remained somewhat of a local legend.  Only four contemporary publications about Broughton are recorded, all provincially printed (probably in York) and extremely rare.  We are delighted to add to this with the discovery of a hitherto unknown broadside: 'Full and complete particulars of the dreadful, surprizing, and alarming apparition of Spence Broughton, which appeared to Miss S---- H----, on Sunday morning, April 15, 1792'.

'Full and complete particulars of the dreadful, surprizing, and alarming apparition of Spence Broughton...'

You’d be forgiven for thinking that Broughton’s fate was of his own making; he deserted his family, gambled and committed many highway robberies after all.  However, in this broadside, the highwayman is instead a victim of a seductress, absolving him of responsibility for his crimes and condemning his unfortunate mistress to a life of' 'never-ending tortures'.

The night before his execution, the highwayman appeared as an apparition in his mistress’s bedroom.  Upon waking she saw Broughton’s coffin, flanked by his widow and three orphans.  The widow reportedly cried:
'Most worthless of thy sex, behold the misery thou hast occasioned!  Behold the widow and the orphans thy infamy has plunged into woe! … The blood of a whole family calls aloud for vengeance upon thee!'

The widow then disappeared, leaving Broughton in spirit-form to condemn his mistress:
'If the sufferings of an innocent and virtuous woman cannot avail, I charge thee to mark my words, for surely they must strike thee with unspeakable remorse.  Have thy not delusive tongue occasioned me to relinquish the chastest love for the lewdest dalliance? Canst thou exist on earth without a foretaste of never-ending tortures? … Surely thou canst not behold my mangled limbs without shedding the most heart-rending tears!'

Broughton then disappeared in a ball of fire, leaving poor Miss S---- H---- terrified and the curtains mysteriously soaked in blood.  The landlady admonished and urged her to 'forsake the highway of destruction, and seek the happy path of reformation and amendment'.  The other surviving printed sources about Spence Broughton strike a similarly sympathetic note about his fate; he apparently repented for his crimes prior to execution and that earned him a measure of public compassion. 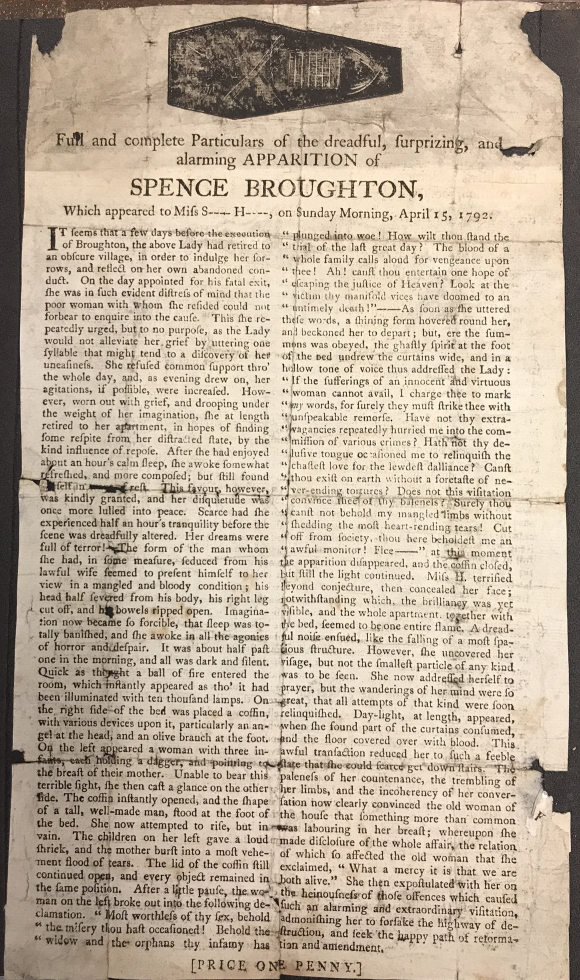 'Full and complete particulars of the dreadful, surprizing, and alarming apparition of Spence Broughton...'

This grubby but unique survival adds to the small corpus of provincial printing about Spence Broughton, and to the corpus of highwaymen broadsides more generally.  Popular print in the eighteenth century was saturated by sensationalist tales, infamous criminals and the odd, squeezed-in, moral lesson.  This was perhaps printed just hours before the execution and its extraordinary but decidedly misogynist tale would’ve been avidly consumed by locals.  It was printed cheaply on waste paper – on the back of a Register of Freeholders form - and it cost only a penny.  It could also provide a valuable clue about the identity of Broughton’s much-maligned mistress, whose name has long since been lost.  The initials “S H” may be the printer’s invention but, then again, they may not.  Either way, this is an intriguing piece of printing.