The Adventures and Vicissitudes of Captain Cook

A penny dreadful account of  James Cook’s boyhood titled The Adventures and Vicissitudes of Captain Cook, offers an unusual example of 19th-century literature concerning this figure.  Published in 20 parts from 1 November 1869, the author of the account remained anonymous, but its publisher was E. Harrison, known for his “sensational fiction” and creation of cheap weekly periodicals aimed at children and adults.  Each part opened with a striking illustration, often of the young figure of Cook embroiled in a physical struggle or in the process of escaping danger. 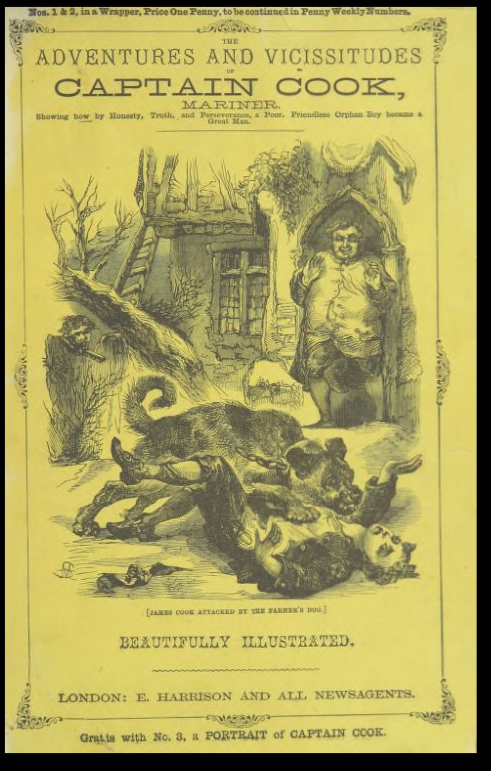 This work is notable for the inaccuracies and embellishments in its description of Cook’s childhood.  Though it is not acknowledged as fictitious in the volume itself, this may have been presumed by the readership.

The story begins with James Cook at the age of ten, living in the village of Marton with his sick and widowed mother.  While this was the correct location of the real Cook’s birth, on 27 October 1728, at the age of eight his family had moved to Great Ayton.  His parents in the Adventures are named as James and Mary Cook, and his father had died while working for a Farmer Gripman.  In reality Cook’s mother was named Grace.  James Cook Senior worked for a Mr Mewburn in Marton and a Mr Thomas Skottowe on Ayton and he was still very much alive at this stage in the younger Cook’s life.

A key plot point of the early chapters of the volume is the death of Cook’s ailing widowed mother, leaving him behind as an orphan with no siblings.  The real Cook was the second of eight children, four of whom died young.  Through this constructed context the series introduced the 19th-century literary trope of the impoverished orphan.  By opening the fictional story of his life in this manner the events that followed could address Cook going out into the world alone and navigating its trials and tribulations.

The events that ensued are filled with action and adventure, childhood companions both kind like Ichabod ‘Ikey’ Mangles, and cruel like Octavius Challoner.  Mysterious strangers act as defenders and draw the hero into new environments.  Together they guide the fictional Cook to his ultimate purpose and allow him to display his moral worth.  His values of honesty and kindness are always rewarded.

While connections to the facts of Cook’s early life are few, these tales create an origin story for the idealised vision of the James Cook that had become well-known in juvenile literature of this period.  In the final scene, as the vessel enters Whitby harbour, where the real Cook learnt his trade and his ships like the Endeavour and Resolution were built, the writer states ‘that with honesty and integrity for a motto, the most unpromising commencement of life may have the brightest finish’.