Captain Archibald Anderson was in command of the East India Company ship Nottingham when he disappeared in May 1790.  Accident?  Suicide?  Or something more sinister?

Archibald Anderson (c. 1751-1790) started his career as an apprentice in the Scottish coastal trade in the mid-1760s.  He joined the East India Company’s service as a midshipman in 1770.  By 1786 he had risen through the ranks to be appointed Captain of the Nottingham and in 1790 was returning to England from his second season in command of the vessel. 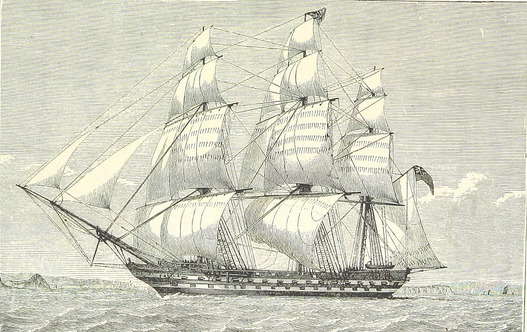 On 23 May 1790 the Nottingham arrived back in England at the Downs having sailed from Portsmouth in February 1789 for Madras and China.  The following morning the Captain's servants discovered that Anderson was not in his quarters, his clothes for the day were still laid out on his sofa, and he was nowhere to be found on board ship.

The Chief Mate George Max states in his journal:
“The servants missing Captain Anderson, a search was made throughout the ship not finding him, supposed he had fell overboard out of the Stern Gallery, as his clothes laid all on the sopha”.

A second ship’s journal tells a very similar story:
“Am. the Servants missing Capt. Anderson a first search was made thro the ship not finding himself found he had fell overboard in the Night out of the stern gallery as his cloathes was left on the Sopha”.

The general consensus from the ship’s officers and crew was that he must have fallen out of the stern gallery during the night and that they therefore considered his death to be accidental.  Newspaper reports of the incident published on 4 June 1790 however shed two very different lights on what they believed had occurred.

The Hereford Chronicle reported that there had been confrontations throughout the voyage between the Captain and his officers and that he had intended reporting their conduct on his return.  Although not explicitly stated, the tone of the article implies that he may have been pushed to prevent the poor conduct charges from being pressed. 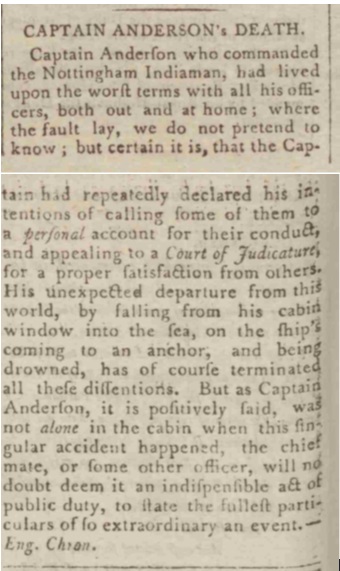 The Chelmsford Chronicle however claims his death as a suicide.  It also references the poor conduct and relations between Captain and Officers, but claims that the Captain had in the days leading up to his death apologised for his conduct and stated his intention not to pursue any conduct charges and to leave it be.  He allegedly even dined with the officers two successive evenings, including the evening prior to his death.  The newspaper also alleges he had written a report to the Board of Directors of the East India Company, dismissed his purser and then written and sealed a letter to a friend before throwing himself out of the window. 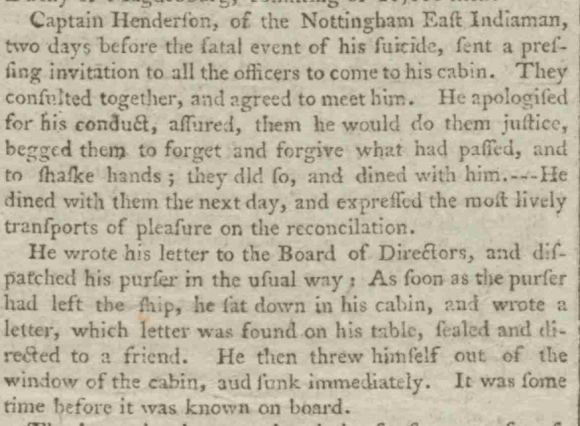 If Captain Anderson did write a report to the Board of Directors and sent it to them prior to his death, it sadly appears that it no longer survives, and his death therefore will forever be shrouded in mystery.

Posted by Margaret.Makepeace at 09:00:00 in Conflict , Journeys , Work