Tyau mate oee – My friends, I am dying

On 9 November 1770, a Tahitian boy about twelve years of age died, probably of tuberculosis, in Batavia, now Jakarta.  In the 18th century Batavia was a Dutch East India Company base, and so plagued by disease that it acquired a reputation as a ‘cemetery’. 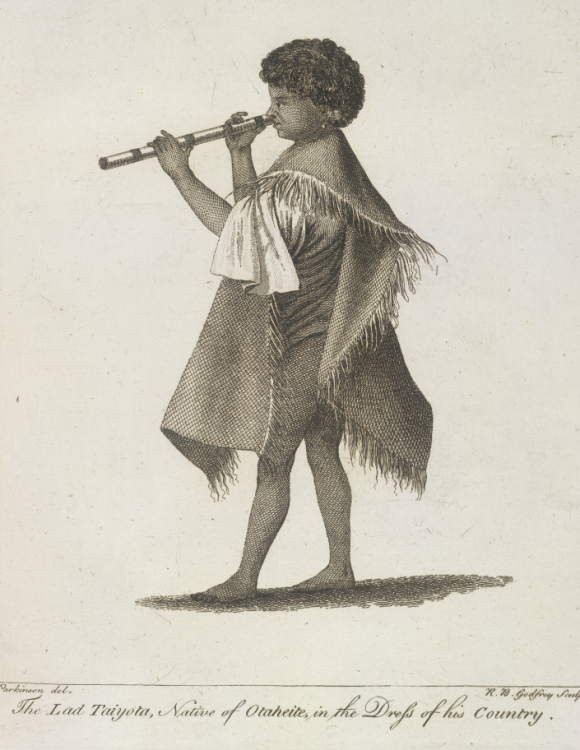 ‘The Lad Taiyota, native of Otaheite, in the dress of his country.’ from A Journal of a Voyage to the South Seas, in his Majesty's Ship the Endeavour (London, 1784). 10497.ff.6, plate IX Images Online

Taiato is among those in the shadows on our historical stage; sadly not unusual for indigenous people.  He made nine appearances in the records, between 13  July, when he joined Captain Cook’s Endeavour with the Tahitian navigator and priest Tupaia, and 26 December 1770, when Cook noted his death alongside others.  He burst into the limelight in one of these appearances which took place off the coast of New Zealand on 15 October 1769.  The Endeavour had only sighted land a few days before, but already a great deal had happened. Banks described  9 October as ‘the most disagreable day My life has yet seen’.  An estimated nine Māori had already been shot dead, and the Endeavour had acquired virtually no fresh supplies of food and water in the nearly two months since they left the Society Islands.

As the crew started to trade for fish with Māori in canoes alongside the ship, a many-layered event unfolded.  Cook tried to trade some red cloth for a Māori cloak, but no sooner was the cloth in the trader’s hand, than he sat down in the canoe, which calmly withdrew.  After a brief discussion amongst themselves, the Māori approached again.  This time however they had other ambitions.  As the ship’s surgeon Monkhouse recorded: ‘we were attending to the coming up of the great war Canoe when all on a sudden an Alarm was given that one of the fishermen had pulled Tupaia’s boy into the boat – they instantly put off, and the great Canoe, as if the scheme had been preconcerted, immediately put themselves in a fighting posture ready to defend the other boat and stood ready to receive the boy from them.  Our astonishment at so unexpected a trick is not to be described’.  The Endeavour’s crew, and particularly Tupaia, were outraged and shots were immediately fired at the Māori, fatally wounding several, and securing Taiato’s escape.

This brief moment in the limelight hints at significant relationships, clearly between Tupaia and Taiato, but also between Taiato and others on the Endeavour.  This invites speculation as to what happened off-stage in the shadows.  According to Druett among others, Taiato was popular with many of the crew. His last, painful, dying words were addressed to his friends, and we have some reason to believe that they were genuine friendships.