A file in the collections of the Board of Control, part of the India Office Records, gives some brief but fascinating details of those living in the former Indian Princely State of Colaba which had come under British control in the 1840s. On annexing the territory from the ruling Angria family, British officials faced the responsibility for the financial maintenance of members of the Angria family, their dependants, and those who had loyally served the Colaba State. 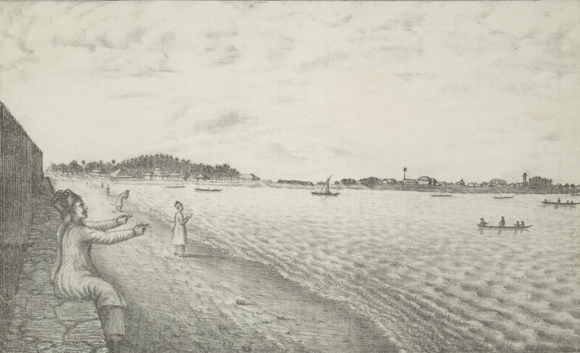 The file contains lists of persons who had received a pension under the previous rulers and those newly recommended for a life pension due to their past service. The recommendations were submitted to the Bombay Government by I M Davies, Political Superintendent of Colaba. 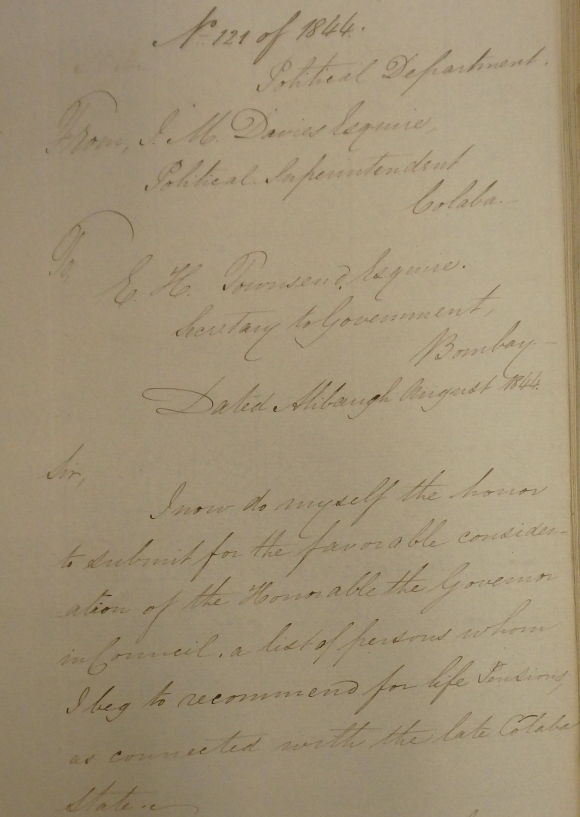 Here are some examples of the entries (spellings as given in the file):

• Luxumon bin Baboo Meetbhowkur, aged 13: This boy’s father was accidentally blown from a gun at the marriage of one of the Chief’s daughters in March 1840. His son was pensioned, and was in the receipt of 2½ rupees monthly when the State was attached.

• Tsanag Dubboo, alias Dzomaee, aged 70: Widow of an old servant in the ‘Armarr’, or department of vessels. Has received an allowance for many years, in consequence of the death of her son caused by falling off the Flag Staff in the Fort of Colaba.

• Wasdeo Babjee Pitkur, Pooranick, aged 70: A servant of the late State, of upwards of 40 years standing. He accompanied Baboorow Angria in Hindustan from 1805 to 1812 and has since resided at Alibagh, where he was entrusted with the duties of Officer of the Adawlut. Under the Political Superintendent he has been employed in the same capacity and is one of the Assessors of the Superintendent’s Court. He enjoyed a liberal maintenance under the late State.

• Appajee Bajee, aged 75: Served as a Puntojee, or teacher, in the Chief’s family for upwards of 40 years. He has for some years past been dependent upon the charity of the Ranees. It is recommended that a pension of 5 rupees per mensem be assigned to him.

• Manajee bin Luxman Lar, aged 45: An old Shingara, or horn blower. He lost his eye sight from smallpox and was 8 years employed in the Artificer’s shop as bellowsman. He received in that employment 8 annas per mensem and 1½ maund of bhat. Being very destitute I beg to recommend that he be allowed a pension of 1½ rupees per mensem during his life.

• Sheik Ismael Gohundaz, aged 100: An old sepoy who has served the State upwards of 70 years. He is still borne upon the books as a sepoy of Saughurgur Fort where he has been for upwards of 40 years. I beg to recommend that a pension of 3½ rupees per mensem be allowed to him during the remainder of his life.

In submitting his recommendations, Davies assured the Bombay Government that he had been as frugal as he had been able to suggest.

Further reading:
A list of persons recommended by the Political Superintendent of Colaba for life pensions, 1844 [Reference IOR/F/4/2075/95768]