August 20th is World Mosquito Day, commemorating the day in 1897 when Ronald Ross confirmed that the malaria parasite was carried by the mosquito.

The Library’s Archives and Manuscript collections contain a wealth of material regarding mosquitoes, malaria, and other mosquito-borne diseases. The records of the East India Company and India Office are particularly rich in information on research into malaria transmission, prevention and treatment, and hundreds of relevant records have been catalogued and are being digitised as part of the India Office Medical Archives project. 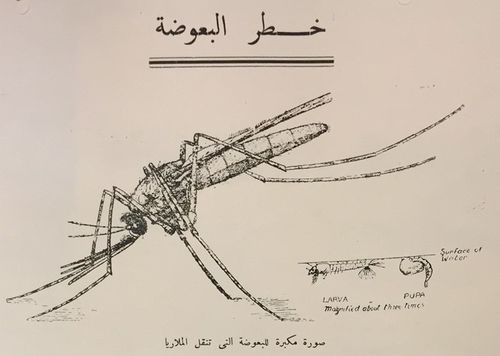 The work of Ross and other scientists, including Indian Medical Service colleagues, are often documented in records known as the Government Proceedings, found under reference IOR/P. This series consists of over 40,000 volumes, and information on military and civil health and sanitation within the Proceedings series has been made more accessible through item-level cataloguing. 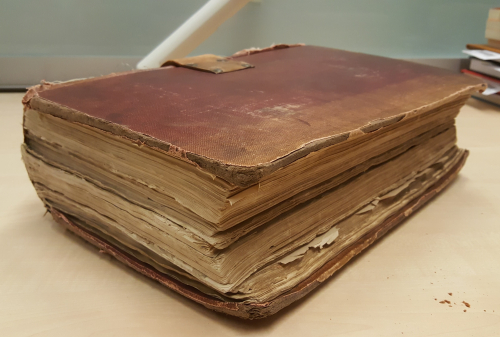 A volume from the Proceedings and Consultations of the Government of India and of its Presidencies and Provinces, IOR/P. One of c46,500 volumes. See an introductory catalogue entry for the entire run here.

Malaria was long thought to be caused by miasma from rotting vegetation and foul waters, and thought to be a particular risk in hot and humid climates. The earlier records contain Medical Topographies prepared by Indian Medical Officers to designate ‘healthy’ and ‘unhealthy’ areas to inform the construction of hospitals and barracks. 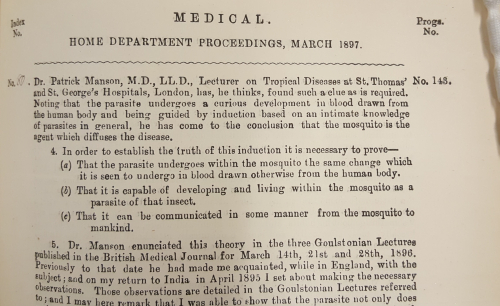 Excerpt of a letter sent by Ross to the Government of India, relaying the observations and theories of Patrick Manson, and making the case for Ross's further study of mosquitoes. IOR/P/5185 Mar 1897 nos 141-45

Drugs derived from the cinchona plant were used as a remedy for malaria. The records document the establishment of cinchona plantations in India in the mid-19th century with trees and seeds taken from the Andes, as well as studies into the production and effectiveness of different preparations. 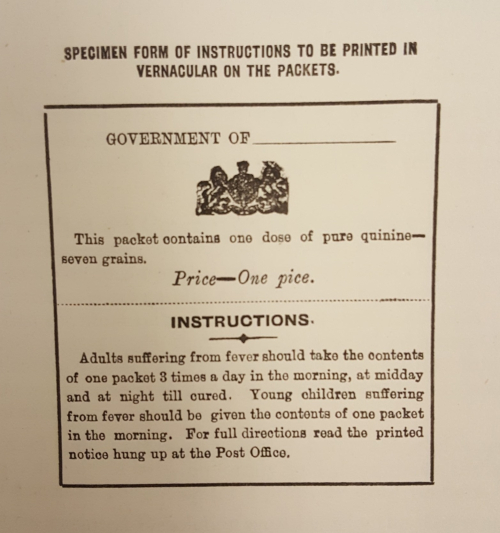 Treating malaria and its symptoms is only one part of the battle against the disease. Once the transmission vector was identified, attention turned to preventing its transmission through the destruction of mosquitoes and their habitats. The records document the establishment of Mosquito Brigades and the development of Government sanitation policies in colonial India. 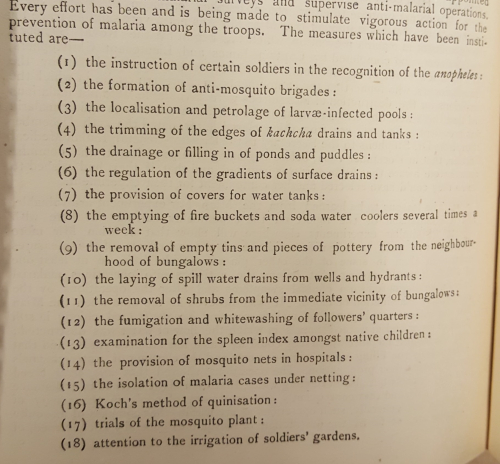 You can find more by searching Explore Archives and Manuscripts using the terms mosquito, malaria, or India Office Medical Archives.

The UK Medical Heritage Library provides access to over 66,000 digitised European medical publications from the 19th century, including many on mosquitoes and malaria.

Posted by Alex Hailey at 12:30:00 in Modern history , Science and environment