In this second blogpost relating to the US-UK Fulbright Commission Archive recently acquired by the British Library, Eleanor Casson looks at the newsletters of the British Fulbright Scholars Association (BFSA) and the Alumni of the US-UK Fulbright Commission. For more information about this collection, there is an event on 19 November 2018 called ‘Hidden Histories: Gaps and Silences in the Archive’; tickets are available now.

Over the course of 70 years The Fulbright Commission has administered grants to numerous high-flyers in a wide ranging selection of professions, sectors, and skillsets. Senator Fulbright’s main aim was to produce world leaders through educational and cultural exchange. The US-UK Fulbright Program has been a particularly successful Commission in achieving this aim.

The BFSA Newsletter was established in 1983, it was sent out to registered members as a way of keeping the community informed about the activities of The Fulbright Commission and the successes of the numerous alumni. The BFSA received a grant from the US Embassy to produce the newsletter to a high quality and improve alumni engagement.

The newsletter went through various overhauls with changes of name and changes of focus before the BFSA moved away from paper copies and began to distribute the newsletter only online. The multiple BFSA events planned throughout the year were documented in the newsletters, including the May Concerts, BFSA Debates, as well as Annual General Meetings Talks. Amongst the articles and photographs of Fulbright events and fundraising efforts there were snippets of the Fulbright Commission’s community including; birth, marriage, and death announcements. 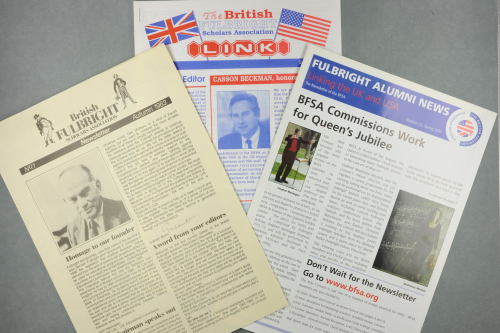 Alongside the community engagement element of the newsletter there were also thought provoking articles from Fulbright Scholars about their chosen interests and often related to the study they were undertaking with their Fulbright Grant. The BFSA newsletter aimed to engage the audience as well as inform them.

This article found in the Spring 1984 issue No. 2 highlights how little politics can change in 34 years. Article by Professor David Walker

Editors of the newsletter included Mary Hockaday, a journalist who went on to become Controller of BBC World Service English, and award-winning Adeola Solanke, a Nigerian-British playwright and screenwriter. Profile articles were written about well-known and successful alumni including Katherine Whitehorn, journalist and columnist with The Observer. Profile articles were also written for the politicians Lord Bernard Donoughue, Baroness Shirley Williams, and Charles Kennedy about their life experiences. Sir Malcolm Bradbury, the author and academic, wrote a small piece reflecting on his time as a ‘Fulbrighter’ in 1955, as well as imagining Sylvia Plath’s journey and experience travelling the opposite way in the same year.