The Metropolitan Association for Befriending Young Servants was founded in 1875.  It was the brainchild of Jane Elizabeth Senior, the first woman to be appointed as a workhouse inspector.  The Association’s aim was to watch over girls sent out to jobs in London by industrial and poor law schools. The girls were to be provided with advice and assistance in times of difficulty and temptation. 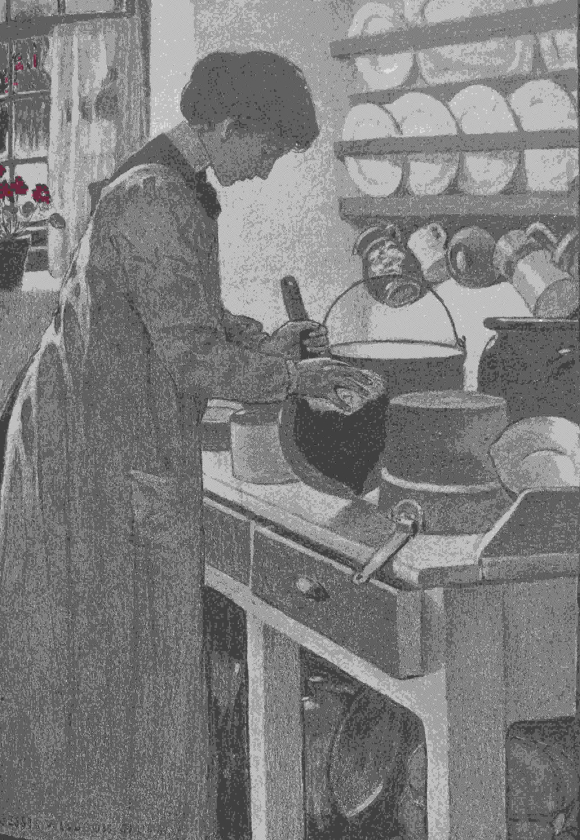 'Though ye have lain among the pots, yet shall ye be as the wings of a dove' - picture by Jessie Wilcox Smith in Scribner’s Magazine P.P.6383.ac.(33), p. 58 Images Online

London Boards of Guardians generally approved of the initiative and some co-operated closely with the Association by handing over the names of the girls and the addresses of their mistresses.  Lady Visitors were recruited to take charge of girls placed out in their neighbourhood – 120 had agreed to help by the end of 1876.  The Lady Visitors sent reports about the girls from time to time to the Association.  In some instances they acted as peacemakers between the servants and their employers, and most mistresses were said to welcome the visits.

The Association opened homes able to provide immediate shelter for girls turned out of their job.  They could not return to the schools after the age of sixteen and often had nowhere to go.  Sometimes girls had not performed their duties well enough to be recommended for another position without a period of probation and training at the homes.  A Laundry Home was opened at Fulham for girls deemed unsuitable for domestic service.

Guidance and friendly care were also offered to other young servant girls not connected to the metropolitan pauper schools but who were friendless or destitute.  Free employment registry offices were set up. Clothing clubs enabled girls to acquire garments suitable for their work, and pay for them in manageable instalments.  The Rector of Christ Church Lisson Grove, a poor parish in Marylebone, wrote in his magazine in 1881: ‘We can send young girls whom we find idling at home to the Office, with the certainty that effectual aid will be given to them; and I have repeatedly found that in this way real and permanent good had been done’.

Girls coming from the workhouse schools were likely to struggle with the transition from an environment ‘where all is done by word of command’ to ‘the happy irregularity of an English household’.  They often found themselves the only servant, ‘expected to learn the ways to the house by intuition, to be able to turn her hand to everything, to be cook, housemaid, nurse, and errand carrier by turns, and sometimes simultaneously’.  It was seen as no wonder some failed and lost their job.  Medals were awarded by the Association to girls who had retained their post for specified periods.

Money was raised through subscriptions, donations, legacies, and fund-raising events.  One generous benefactor was Alice de Rothschild, and Octavia Hill wrote a letter to The Times soliciting support.  Other well-wishers made gifts of clothing or provided medical advice.  Group treats were provided such as a trip to London Zoo, or tea at a Lady Visitor’s home.

The Association later became known as the Mabys Association for the Care of Young Girls. It continued until 1943 when the London County Council took over its work.

Posted by Margaret.Makepeace at 10:30:00 in Domestic life , Women's histories , Work