It is not unusual when looking through archives to find something unexpected.  This entertaining leaflet for Murray the Australian Escapologist was among the private papers of Sir John Gilbert Laithwaite, Private Secretary to the Viceroy of India from 1936 to 1943.  It was in a file of brochures and pamphlets he had collected on his various tours of India. 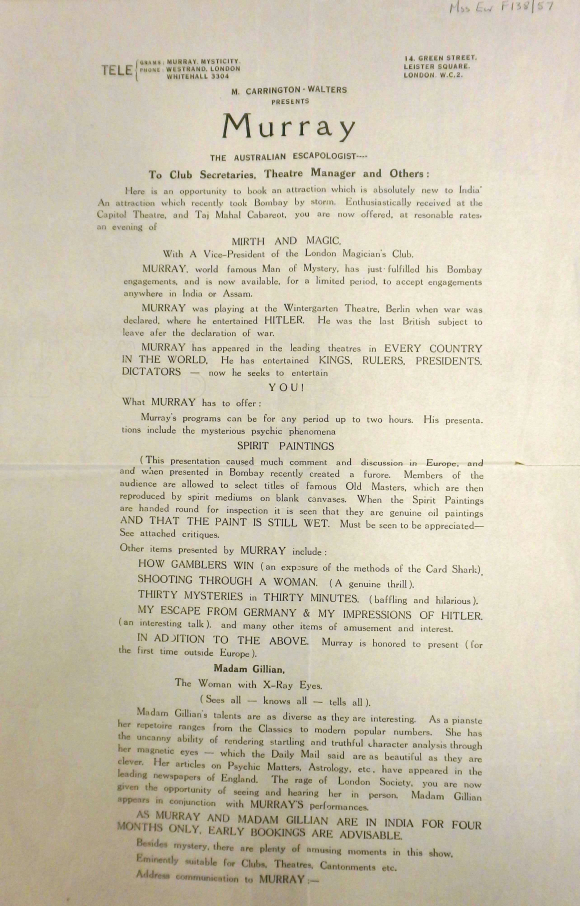 Born in 1901 in Melbourne with the exhausting full name of Leo Norman Maurien Murray Stuart Carrington Walters, he not surprisingly shortened it for his stage act to Murray the Escapologist.  His interest in magic and escapes had been kindled as a boy by seeing other magicians, including the famous Houdini.  Having saved for a pair of handcuffs, he practised escapes by handcuffing himself to his bed every night so that he could not go to sleep until he had freed himself. 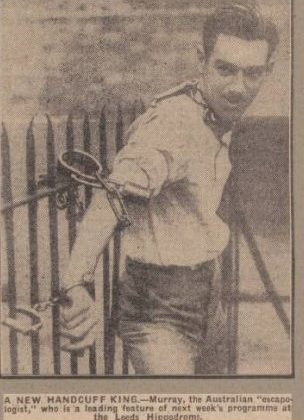 Murray worked hard and travelled the world building up his act.  He often worked as a crew member on ships during the day, and performed his act in the evening wherever the ship docked.  In this way he travelled to America, Singapore, India, and South America, before reaching Europe, arriving in England in the mid-1920s. 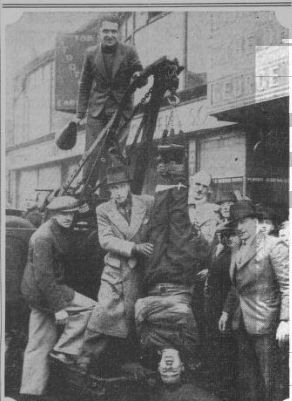 Some of his stunts sound particularly hair-raising, such as hanging upside down in a strait-jacket from the roof of the Palace Theatre Blackpool, being thrown out of an airplane over the Bristol Channel while locked inside a mailbag, being locked in a safe and thrown into the sea, or being manacled and thrown into the lions’ den at Olympia.  In 1926, he told a correspondent of the Dundee Courier that the feat he was most proud of was being secured to the track of the Peking-Shanghai Railway ten minutes before the Shanghai Express was due to leave the station.  He escaped when the train was only 100 yards away.  Such acts did not always win approval from the authorities. In Japan the police refused to allow him to give a public performance because he would set a bad example.

In 1939, Murray was touring Germany, and performed at the Wintergarten Theatre in Berlin where he entertained Adolf Hitler.  On the outbreak of war, he had to quickly flee the country leaving his props and costumes behind in order to avoid being interned.  As the leaflet shows, this experience became a part of his subsequent act.  To build up his show again, he travelled to India where he performed successfully in Bombay.  In India, he performed with Madam Gillian, the Woman with the X-Ray Eyes, who had the “uncanny ability of rendering startling and truthful character analysis through her magnetic eyes”. 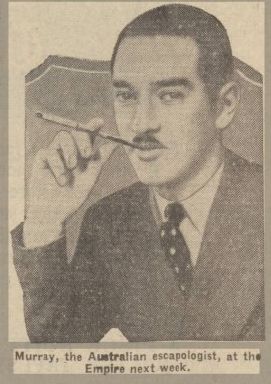 Murray continued to amaze audiences until his retirement in 1954, when opened a magic shop in Blackpool called Murray’s Magic Mart, which he ran until a couple of years before his death in 1989.