The Bunhill Fields Burial Grounds are the final resting place for around 120,000 people including Daniel Defoe, John Bunyan, Susanna Wesley, and William Blake. Previously, Blake’s precise location in the cemetery was unknown but thanks to Carol and Luis Garrido’s investigation, the exact location has been determined. In celebration of the discovery, the Blake Society commissioned a new gravestone, and arranged for an unveiling ceremony 191 years after Blake’s death, on August 12, 2018. Philip Pullman, novelist of His Dark Materials trilogy, and heavy metal frontman of Iron Maiden, Bruce Dickinson, came together, alongside other Blake devotees to celebrate the occasion. 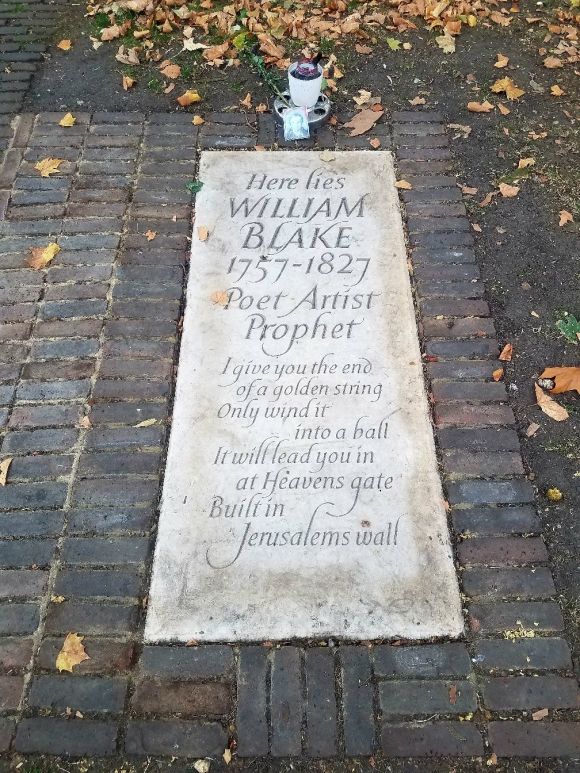 Another grave to visit for all things Blake, is Robert Blair’s The Grave, a Poem (1808). Blair belonged to what is often called the Graveyard School, a pre-Romantic group of poets in the eighteenth century that wrote about mortality, loss, and the afterworld.  Blake was commissioned to create designs to illustrate Blair’s popular poem for a new edition. Eventually, Blake was ousted from the position as engraver to be replaced by Louis Schivaonetti but twelve of his designs would populate the pages, and later would be Blake’s claim-to-fame in the nineteenth century.

An interesting plate by Blake is The Soul exploring the recesses of the Grave. The design is described in the book as: “The Soul, prior to the dissolution of the Body, exploring through and beyond the tomb, and there discovering the emblems of mortality and of immortality”.  The Soul, embodied as a curious woman holding a candle, ventures into the rocky, cavernous tomb that houses a corpse surrounded by flames. Atop the cave is a young man, with a crescent moon appearing behind and between his legs, bending towards the tomb with a confused, saddened expression. 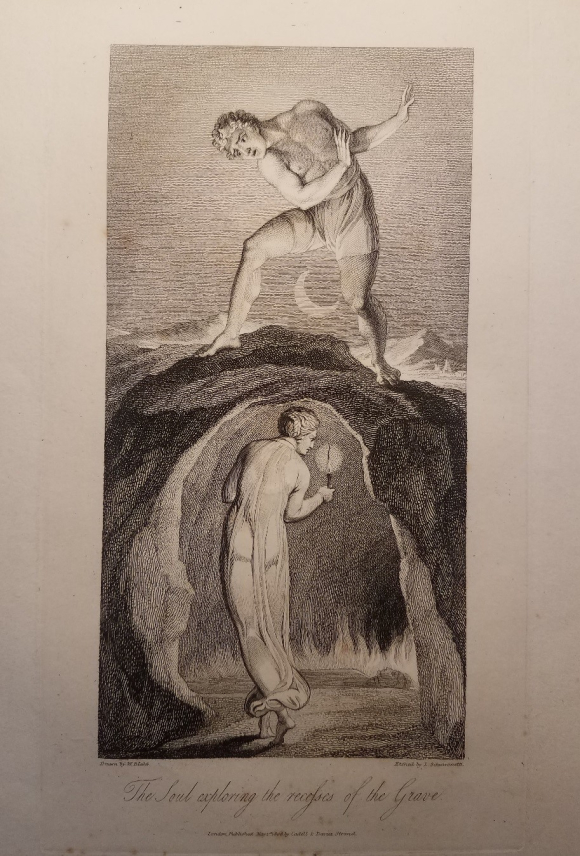 Scholars Robert N. Essick and Morton D. Paley suggest comparing this design to another contained in The Grave, called Death’s Door. These two images function as opposites – The Soul Exploring conveys restriction and obfuscation, and the Death’s Door revealing the possibilities of regeneration after death. Blake’s departure from gloom and towards the opportunity of immortality and spiritual regeneration is epitomized in the pairing of engravings. As the description of the imagery asserts in The Grave (1808), “these designs, detached from the work they embellish, form of themselves a most interesting poem.” 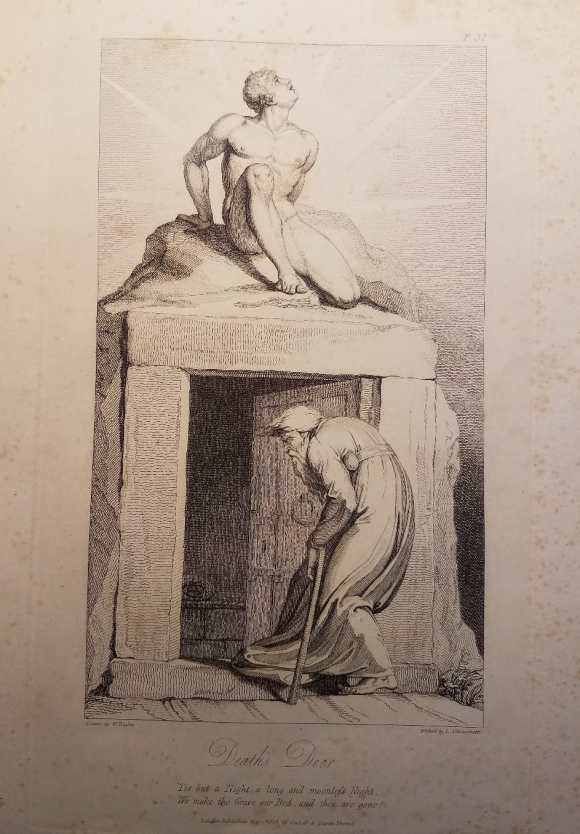 The Notebook of William Blake, page 70.

Carol and Luis Garrido’s efforts to find the exact location of Blake.

Posted by Margaret.Makepeace at 10:30:00 in Rare books , Visual arts