In November 1764 the Society for Promoting Christian Knowledge wrote to the Court of Directors of the East India Company for permission to send a number of ‘sundry items’ out to their missionaries in India on the ships sailing that season.  The Society sent out various supplies to their missionaries each year and their lists often included unexpected items such as the Four Cheeses in Lead and a Harpsichord sent out in 1762 and featured previously on Untold Lives.

The 1764 list of sundry items included the surprising entry of two bottles of Hungary Water.  Hungary Water, also often known as “The Queen of Hungary’s Water” was one of the first alcohol based perfumes to be produced in Europe and was primarily made with rosemary.   It was the most popular fragrance and remedy in Europe until the development of Eau de Cologne in the late 18th Century.  The water has many myths associated with it, the most common one being that it was named after the Queen of Hungary who used it and at age 70 was believed to have looked so youthful a 25 year old Duke asked for her hand in marriage believing her to be of a similar age. 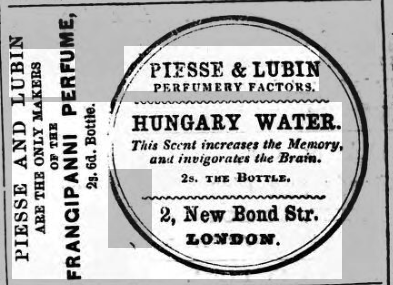 Advertisement for Hungary Water in Homeward Mail from India, China and the East 9 June 1857

Hungary Water was most commonly used as a cure-all beauty tonic and was believed to help maintain a youthful appearance and beauty.  It was also considered to have health benefits when digested including to improve strength and eyesight and to dispel gloominess.  The Society for Promoting Christian Knowledge presumably sent it to their missionaries for the health benefits, rather than to maintain their youthfulness and beauty. The 1775 publication The Toilet of Flora features a recipe to make what is refers to as ‘Genuine Hungary Water’:

'Put into an alembic a pound and a half of fresh pickt Rosemary Flowers; Penny royal and Marjoram Flowers, of each half a pound; three quarts of good Coniac Brandy; having close stopped the mouth of the alembic to prevent the spirit from evaporating, bury it twenty-eight hours in horse-dung to digest, and distill off the Spirit in a water-bath.

A drachm of Hungary Water diluted with Spring Water, may be taken once or twice a week in the morning fasting.  It is also used by way of embrocation to bathe the face and limbs, or any part affected with pains, or debility.  This remedy recruits the strengths, dispels gloominess, and strengthens the sight.  It must always be used cold, whether taken inwardly as a medicine, or applied externally.'

More recipes from the publication The Toilet of Flora featured in the 2013 Untold Lives blog post Lip Salve and Worms in the Face.