Before Robert Brooke of the Bengal Army became Governor of St Helena in 1787, he spent time in his native country of Ireland.  He volunteered to recruit soldiers for the East India Company armies, and then devoted his time to establishing a cotton mill at Prosperous in County Kildare. 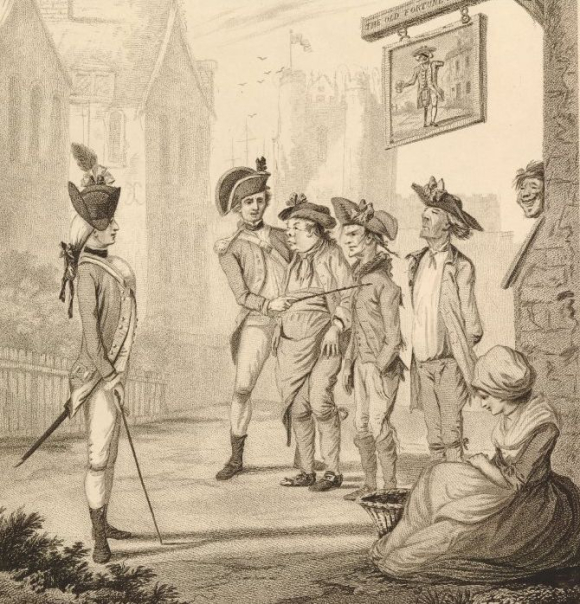 The legality of Brooke recruiting men in Ireland on behalf of the East India Company was questioned in the House of Commons by Sir Lucius O’Brien in February 1778.  By way of reply Brooke wrote a paper justifying his activities. Brooke stated that the Company’s charter allowed it to raise men for the defence of their settlements abroad.  The war against America had forced the government to increase the bounty offered to recruits for the King’s Army, causing a sharp fall in the numbers of men volunteering to serve the Company in India.  Therefore the Company had turned to Ireland for manpower to defend its interests in India ‘which may hereafter prove to be the richest Jewell in the British Crown’.

Brooke countered arguments that Company recruitment would thin the population of Ireland with reasons for allowing the ‘temporary Emigration of the Natives’.  He claimed that ‘Idle and dissolute Mechanics will find that Employment of which they were deprived at Home… the Kingdom will no longer wear a face of poverty.. and Ireland will be purged of a riotous Peasantry, that often pass their Lives in beggary, and generally conclude them in Jail’.  The Irish would fight for the British Crown rather than join French or Spanish forces.

He also defended his methods – he did not send out recruiting parties; he did not beat a drum or give arms to any man; he did not lure men with false representations or ply them with liquor; and he did not rob masters of their apprentices.  Instead he placed a series of advertisements in the Irish press aimed at attracting young men ‘desirous of pushing their fortunes abroad’. 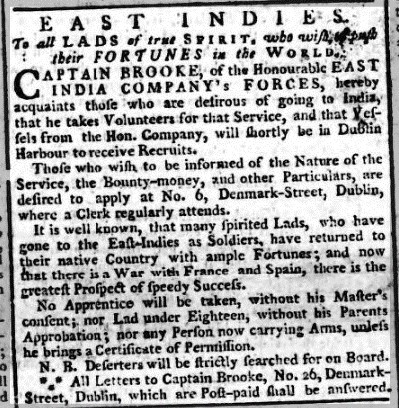 Brooke said that many ‘spirited Lads’ had gone to India as soldiers and returned home with ‘ample Fortunes’.  He claimed that war with France and Spain now gave the prospect of speedy success through prize money.  Boys under eighteen had to have their parents’ permission to enlist. The East India Company ships taking the recruits from Dublin were searched for deserters.

The  registers of East India Company recruits embarking for India give a description of those who enlisted in Dublin during Brooke’s campaign.  The vast majority were recorded as being labourers under twenty years of age.  Very young boys joined as drummers: in 1779 John Hewitson aged 11 and Christopher Hewitson aged 12 sailed together for Bengal on the ship Neptune.

Given the very high risk of death from disease or in military action, many of Brooke’s lads would never have made the return journey from India to Ireland.  But perhaps some did find ‘not only a Road to Station and Honour, but to Wealth also’.