The Ministry of Information was the British Government department responsible for publicity and propaganda during the Second World War. On 22 August 1940, Arthur John Arberry at the Ministry of Information wrote to Roland Tennyson Peel at the India Office, enclosing colour portraits of Emir Abdullah of Transjordan (ʿAbdullāh bin Ḥusayn al-Hāshimī), the Sultan of Muscat and Oman (Sa‘īd bin Taymūr Āl Bū Sa‘īd), and the Shaikh of Bahrain (Shaikh Ḥamad bin ‘Īsá Āl Khalīfah, erroneously referred to as the Shaikh of Kuwait in the letter).

Arberry wrote that the Ministry’s Far Eastern Section had ordered a large quantity of these portraits for distribution in the Dutch East Indies (now Indonesia), and that a caption would be added ‘indicating that these Muslim rulers support Britain in the present war’, in an attempt to foster support for the Allies amongst the predominantly Muslim population. He went on to request Peel’s advice ‘as to whether these portraits could appropriately be used for distribution on a large scale in the Middle East, especially in Hadhramaut and the Persian Gulf’, as propaganda.

This letter and the portraits, below, are included in the file IOR/L/PS/12/3942, which has been digitised and will soon be available to view on the Qatar Digital Library. 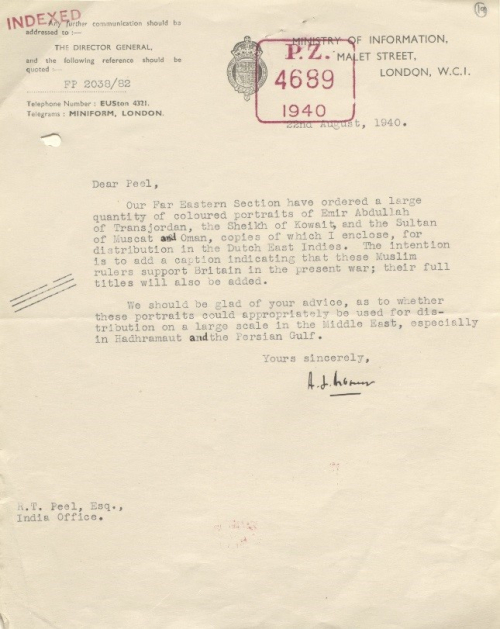 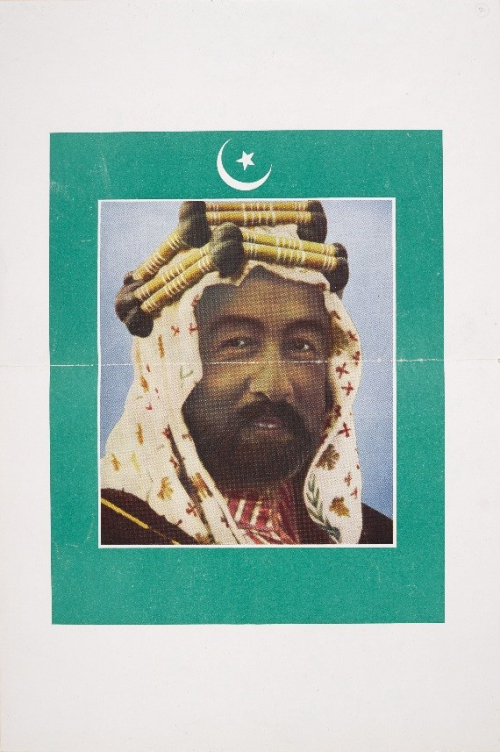 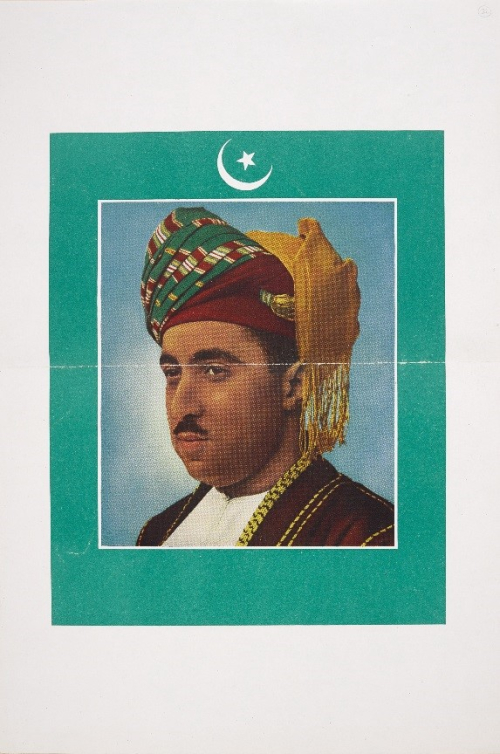 Arberry was sent a reply from John Percival Gibson of the India Office, advising him that ‘we think it undesirable to make any use for publicity purposes of the Sultan of Muscat’s portrait, chiefly for the reason given in Peel’s letter to Rushbrook Williams of the 23rd January [1940]’. The letter referred to is not included in this file, however a draft copy of it can be found in file IOR/L/PS/12/2995, f 9. In this letter, Peel informs Laurence Frederic Rushbrook Williams of the Ministry of Information that ‘the Sultan of Muscat has asked that steps might be taken to prevent publicity being given…to Muscat. Apparently the Sultan is apprehensive that such publicity might draw unwanted attention to his country in German & Italian quarters’, and ‘We have promised to respect his wishes’.

In Gibson’s reply to Arberry, he also stated that provided the Sultan of Muscat’s portrait was omitted, he did not think there would be any objection to distribution of the other portraits in the Middle East generally, but that this was more a matter for the Colonial Office and the Foreign Office. However, he added that ‘I doubt it would be worth the expense to make any distribution in the Persian Gulf, where the attitude of the Sheikhs is well enough known’.

Arberry further consulted the India Office about whether it would be politically acceptable to include a portrait of the Shaikh of Kuwait (Shaikh Aḥmad al-Jābir Āl Ṣabāḥ), to which Peel responded that there was no objection.

Before the portraits were finally approved, Sir Hassan Suhrawardy, Adviser to the Secretary of State for India, was asked for his opinion on them. Suhrawardy approved the green border of the portraits, but thought that it should be an olive shade instead. He also advised the Ministry of Information that the star and crescent symbol should be omitted from the border, for the reasons stated in the letter below. 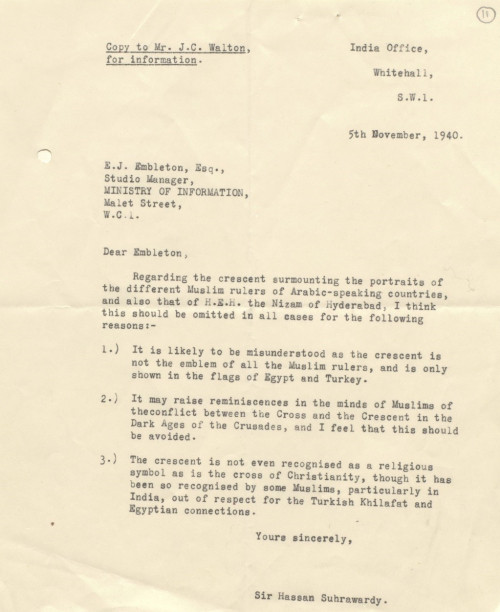