Jonas Hanway’s Marine Society is perhaps best known for its pivotal role in supplying the Royal Navy during manpower crises in the 18th century, ridding London’s streets of vagrant and delinquent boys, putting them to good use for the nation.  A lesser known aspect of the Society’s work is the apprenticeship of boys to merchant vessels; over 25,000 were sent to sea in this manner 1772-1873. 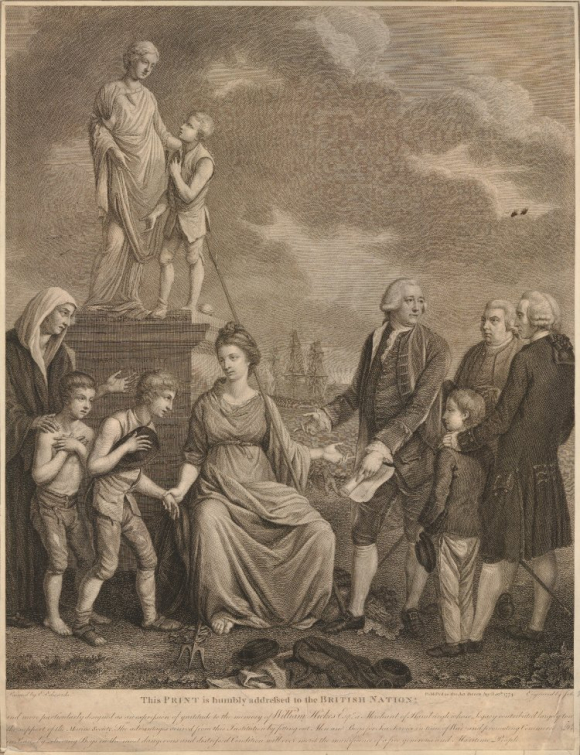 Britannia seated at the foot of a statue of charity inscribed 'Marine Society', as a woman at left brings two poor children towards her, and members Jonas Hanway, John Thornton and William Hickes stand at right with another boy. After Edward Edwards (1774). Image courtesy of the British Museum.

By the 1820s merchant supply was the main endeavour of the charity, and the East India Company was the biggest and most important employer for the Society.  Between 1786-1858, over 2,000 boys were supplied for trade expeditions or the Bombay Marine (later the Indian Navy).  The East India Company became de facto patrons, contributing generous donations; their relationship first began during the Seven Years war, as a letter of March 1757 from the Society to the Company illustrates, thanking them for £200. 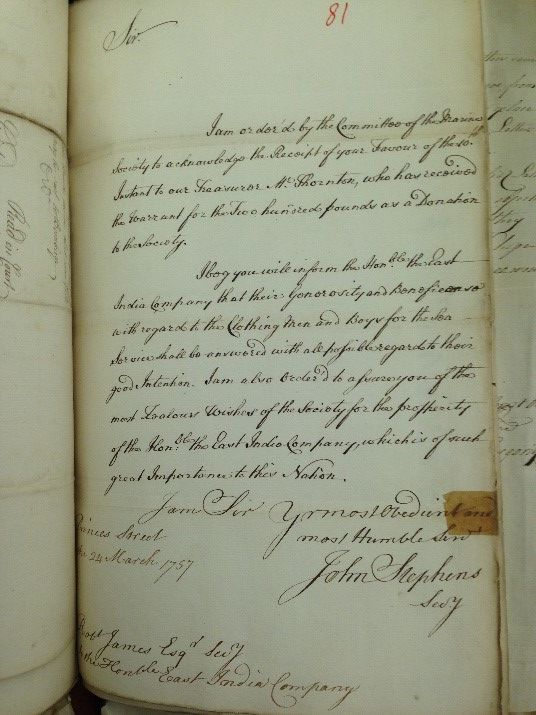 The first batch of 42 boys were apprenticed on 5 December 1786, to the ships Locko and Melville Castle for five years.  Boys were generally apprenticed for between four and seven years, or sometimes contracted for the voyage only; because the Company were taking large numbers of boys at a time, the Society granted exemptions from their usual strict requirement for a formal apprenticeship.  This did not mean that those boys only had a short-term experience with the Company though; an informal arrangement was effected whereby a boy could return from the voyage and board the Society’s training ship until their next assigned voyage.

The Society did try to monitor the fate of the boys.  A letter to the Company dated 1 October 1805 castigated '…sixty-six of the Boys sent from this Office into the Grab Service of the Honorable Company in 1801 are omitted in the return dated Bombay 1st January 1805, and to request that they [the Court of Directors] will be pleased to give orders, that the necessary information may be obtained as early as possible, the Friends of the Boys being under great anxiety at not having an account, as they were promised, and had reason to expect'. 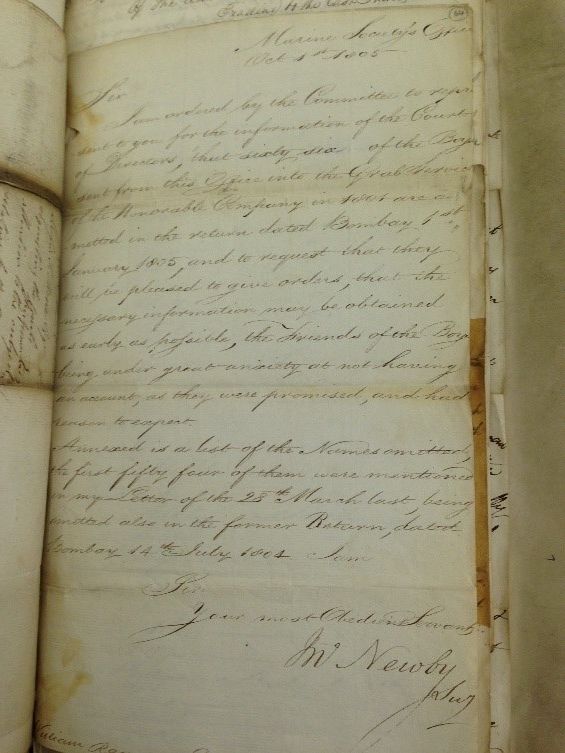 One of the missing boys never returned.  Patrick Connelly was a destitute thirteen year old from Ireland when he presented at the Society’s offices looking for a better life.  He was placed on board the Northampton for five years, but sadly drowned near the end of his term on 26 May 1805.  A certificate was provided to the Company: 'This is to Certify that Patrick Connelly was sent by this Society to the Honorable East India Company’s Grab Service, he went to India in the Northampton in 1802 and was drowned 26 May 1805'. 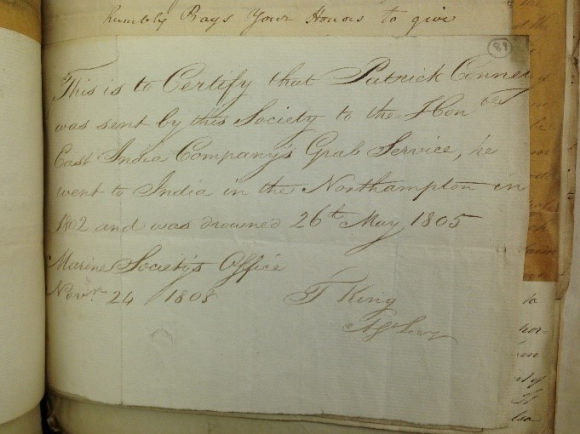 However, for some boys the risk of death was a gamble that ultimately paid off.  Fourteen-year-old George Byworth, son of a Lambeth watchmaker, went out to the East Indies in the Scaleby Castle in March 1823, and by eighteen was Third Officer on the Lord Lyndoch.