Three women accused of witchcraft: a unique pamphlet from the height of the witch craze

We associate witches with broomsticks, evil potions and fairy tales but we should remember that in early modern Britain witchcraft really was something to fear, especially for those women accused of it.  The British Library holds the sole surviving copy of a pamphlet called A Detection of Damnable Driftes, Practized by Three Witches Arrainged at Chelmifforde [Chelmsford] in Essex, at the Late Assizes There Holden, Which Were Executed in Aprill, 1579.  It describes the cases against women accused of witchcraft, three of whom were found guilty and hanged in 1579. 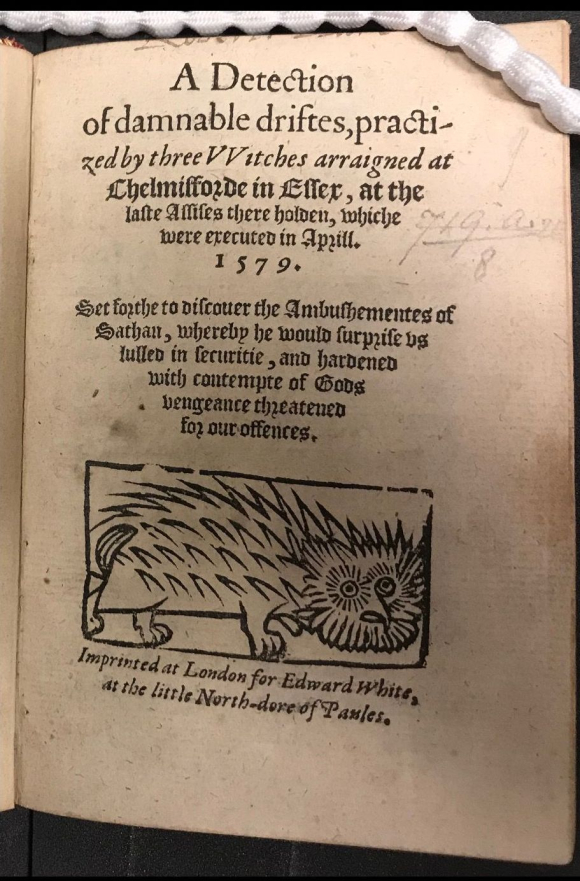 Title page from pamphlet A Detection of Damnable Driftes

Elizabeth Fraunces, of Hatfield Peverel, was by all accounts a fairly notorious witch, having been to court twice before this trial.  In her previous confessions, she admitted to possessing a familiar that took the shape of a white cat unhelpfully called Satan.  She also confessed to stealing sleep and killing one Andrew Byles, who would not marry her after getting her pregnant.  The cat told her what herbs to drink to abort the pregnancy.  Elizabeth also confessed to killing her six-month-old daughter and making her second husband lame.  She was imprisoned and pilloried.  During her third and final trial, Elizabeth confessed to bewitching her neighbour Alice Poole because she refused her some yeast.  Elizabeth employed a spirit to bewitch her that took the shape of a “little rugged dogge”.  She was a spinster by this time.  Before being put to death, Elizabeth named other local witches; it was common for women to incriminate others; it took suspicion away from themselves. 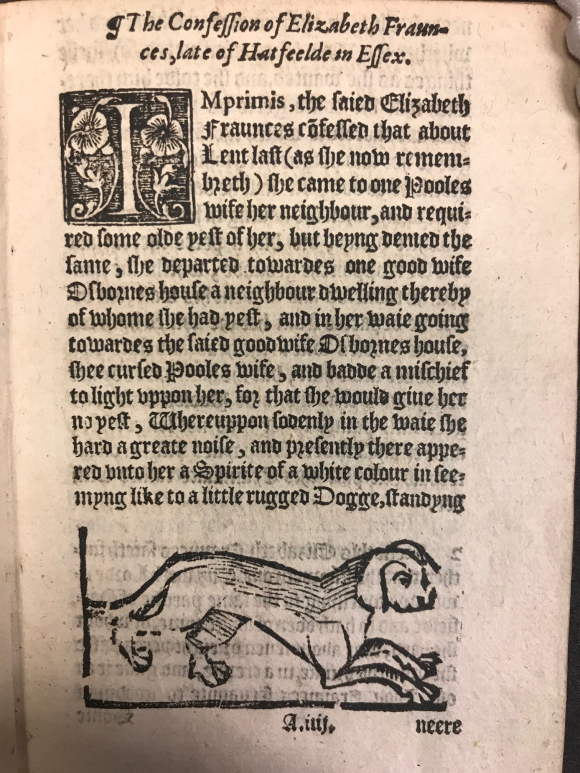 Confession of Elizabeth Fraunces from A Detection of Damnable Driftes

Elleine Smith, of Maldon, was a young women who refused to give her father-in-law a portion of the money she’d received from her mother, who had been executed for witchcraft years before.  They argued and Elleine purportedly told him that he’d regret crossing her.  He wasted away soon afterwards.  She was also accused of inflicting great pains on her neighbour because, during these pains, the neighbour noticed a rat run up his chimney and change into a toad.  He apparently thrust it into the fire and it turned blue.  Lastly, and most horrifically, Elleine was accused of killing a four-year-old girl by breathing on her. She was found guilty and hanged.

The last execution described in the pamphlet is that of Mother Nokes, who was accused of making a young man lame after he stole her daughter’s gloves.  Mother Nokes then discovered that her husband was having an affair and that they were expecting an illegitimate child.  She told them that they wouldn’t keep the baby for long and, shortly afterwards, it died.

The causes of the witch craze are still hotly debated but it was undoubtedly a febrile social phenomenon that spread like wildfire through communities.  Early modern people were superstitious and the witch craze was a period of widespread moral panic; they certainly believed in witchcraft.  The vast majority of those accused were women cast out of their communities and victims in their own right.  In this pamphlet alone, we have a woman who was abandoned and left to abort her pregnancy, a young woman whose father-in-law was trying to take her money and a wife whose husband had an affair.  Whether they were falsely accused or took revenge by witchcraft or more natural means, this pamphlet is testament to the plight of three women in desperate situations.

Posted by Margaret.Makepeace at 1:35 PM