On 29 August 1864 Henry Wilkinson was brought before the magistrate at Clerkenwell Police Court charged with the wilful murder of his wife Eliza who had died the previous night.  Henry was a stonemason’s labourer aged 29 and he lodged with 28-year-old Eliza and their three children at 9 Cross Street in the Hatton Garden area of London.  Relations between the married couple were not always happy because of Henry’s jealousy and heavy drinking. 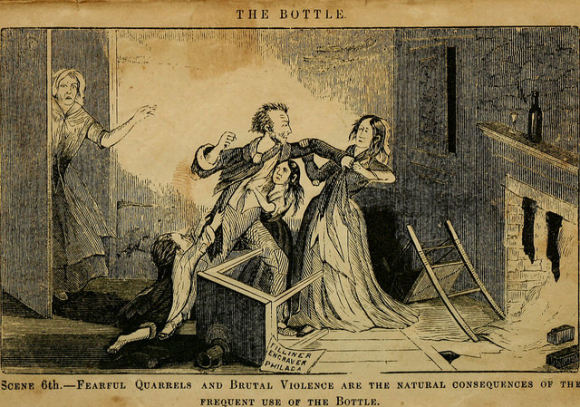 The Wilkinsons had visitors on Sunday 28 August, going to the station in the evening to see them off on a train.  One of the friends kissed Eliza.  Henry flew into a rage, and he cursed and threatened his wife before striking her very hard.  At 10pm Eliza arrived at home and spoke to Sarah Collier who lodged in the same house.  Eliza was afraid her husband would beat her, so she was sent to sleep in the same bed as Mrs Collier’s aunt.   At midnight Henry came home drunk.  He went looking for Eliza, pulled her out of bed, and punched and kicked her as she lay on the floor.  She began to vomit blood, saying ‘Oh mistress, he has given me my death blow!’  Henry immediately began to help his wife, carrying her to her own bed, giving her brandy, and going to fetch a doctor.  But poor Eliza died about an hour later.

Sarah Collier testified that she had seen Henry ill-treating his wife before this, adding that he was very kind to Eliza when sober and also treated his children well.  The case was then remanded to allow a post mortem to take place.  Bail was refused.

An inquest into Eliza's death opened on 2 September 1864 at the Three Tuns Tavern in Cross Street.  Henry was brought up in custody under a warrant from the Home Secretary.  Large crowds, mostly women, gathered in the street, and the windows of neighbouring houses were thronged with spectators.   The Marquis of Townshend, chairman of the Society for the Protection of Women and Children, sat at the coroner’s side.  Several witnesses were questioned and Dr Thomas Clark who had conducted the post mortem examination gave the cause of death as a ruptured diseased spleen.  Clark said that the condition of Eliza’s spleen might have been aggravated by ill-treatment by Henry, but the slightest blow would have caused death. 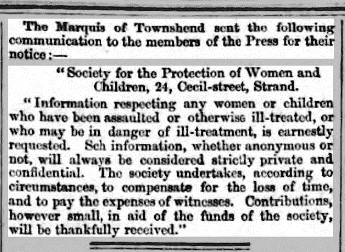 In summing up, the coroner said the case showed the importance of the work of the Society for the Protection of Women and Children.  Whenever a man ill-used his family, the women and children should apply to the Society and steps would be taken to prevent such calamities.

The inquest jury decided that Henry did not intend to kill his wife and therefore their verdict was manslaughter.  However, after hearing the evidence, the magistrate at Clerkenwell decided Henry should be tried for wilful murder rather than manslaughter.  At Henry’s trial at the Old Bailey on 19 September 1864, he 'received a most excellent character, amongst others, from the father, brother, and sister of the deceased'.  He was found guilty of manslaughter and sentenced to twelve months in prison.