The Regulations for Recruiting for the Regular Army published in 1903 laid out the criteria under which boys aged between fourteen and seventeen years could be recruited and the roles they were permitted to take on.  Any boy enlisting in this way had to produce a certificate of good character, his birth or baptism certificate, proof of his elementary school education to at least Standard V, and have the written consent of his parents. 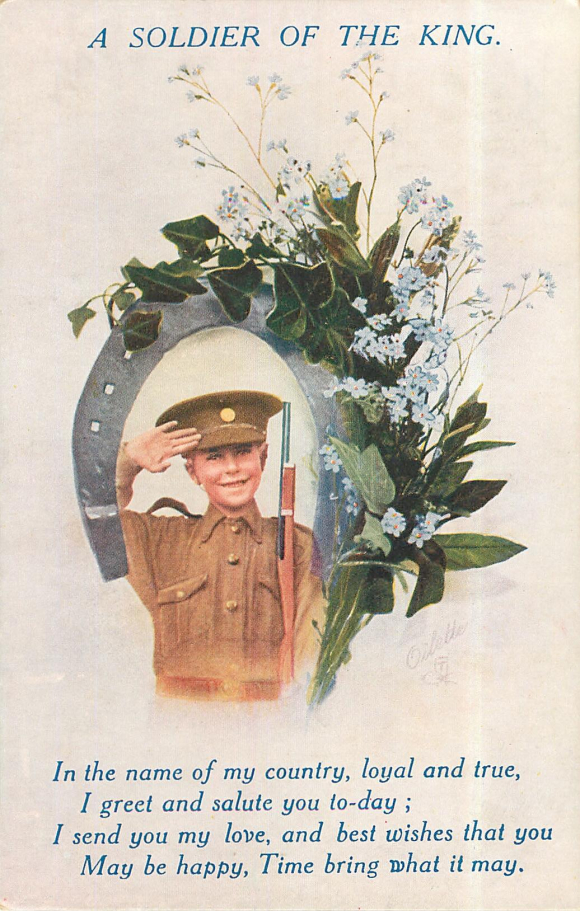 'A Soldier of the King', courtesy of TuckDB Postcards

One such boy was George Joseph Wilson Baker, the eldest son and the sixth of twelve children of George Joseph Baker, a wood engraver, and his wife Henrietta Alexandra, née Howard, a music hall entertainer.  George was born on 21 July 1891 on the Isle of Sheppey, but spent most of his childhood in Colchester, Essex.

His parents had suffered great tragedy shortly before his birth when in May 1891 their daughters Nettie, Lillie, Ada, Bessie, and Nellie, all aged five and under, died of a combination of measles, whooping cough and bronchitis.

George’s parents had two more daughters together before they appear to have separated in about 1896.  George continued to live with his mother Henrietta who had four more children with another man, Joseph Lewis, although she remained married to George’s father until his death in 1936.

George enlisted in the British Army at Tidworth on 21 March 1906 and was attested as a boy in the 1st Battalion, Oxfordshire Light Infantry, he was fourteen years and eight months old at the time.  He remained in England until 5 December 1906 when he was posted to India, arriving there on 27 December.  The Battalion remained in India until 5 December 1908 when they went to Burma.  It was in Burma in June 1909 that George turned eighteen and having attained that age was given the rank of private.  The Battalion left Burma on 25 September 1910 and returned to India where they remained until George paid £25 for his own discharge on 30 September 1913.  During his time in the Battalion George served as a bandsman and later an unpaid lance-corporal.

It does not appear that George ever returned to England but chose to remain in India.  In 1915 he was an inspector for the Bombay Port Trust Docks when he married Margaret Paterson.  George and Margaret do not appear to have had any children and George died of pneumonia on 5 October 1918, most likely a victim of the flu pandemic sweeping Bombay.  By the time of his death he was assistant manager for the Bombay Port Trust Dock, a long way from his enlistment in the British Army in 1906 as a boy soldier.