In April 1780, East India Company military cadet William Lambert wrote from Bombay to his friend Jonathan Oldman in England.  He reported on the long voyage from England, his first impressions of India, his hopes of advancement, and a longing for female company. Tom Raw gets introduced to his Colonel from Tom Raw, The Griffin (London, 1828)

Sir
I set me down with a great deal of pleasure to scrawl two or three lines to you.  I hope these lines will find you perfectly Happy in the Arms of your Dear ------ as I hope to be in a short time with one of the Beauties of the East.  I have arrived at the (long looked for) place, at last, after a passage of about Nine Months, which was very tedious time on Board a Ship, but knowing it was only for a time, and not for ever we spent our time agreeably as we could.  I have the pleasure of informing you that India is much pleasanter than I Expected, only the Middle of the day is rather to hold.  I thought when I left England, that I left all the Wars behind me, but have had the pleasure to find it to the Contrary, as the more danger more Honour, for the War is much hotter here than Europe, I have not yet got a Commission but expecting one every day.  I arrived on the Island on the 23rd of February 1780, this part of the World produces every thing one could wish for, the Pay of a Cadet is a Rupee per day, that is equall to half a Crown in England, and as soon as Commissioned more than double the sum; how happy I should be to be with you in Cumberland was it only for one day.

We should have a pleasant [w]alk and an evening retreat, one might have a walk on a grass pland, but grass I have not seen in India the Sun burns all that away, so that we always walk on a Sand Bank, as on the Sea shore, which is very disagreeable for the dust.  If you will take upon you to Freight a Ship for the East Indies I will take upon me to tell what her Cargo must consist of; and that must be Ladies, for they fetch the highest prizes of any one articule.  I think some of your North Country Ladies will do very well, the Ladies here have Money plenty, we dont want you to bring any Fortunes only Beauties so if you think any thing about this affair I shall wait to purchase a part of your Cargo which I hope you’ll let me know in your first Letter which you’ll send by the First Ship that Sails for India, the News of India I have not Collected yet but by the next Ship you may Expect another line which is all at present from your ever loving and nevr failing Friend and Wellwisher

NB direct to me at Bombay East Indies Ensign 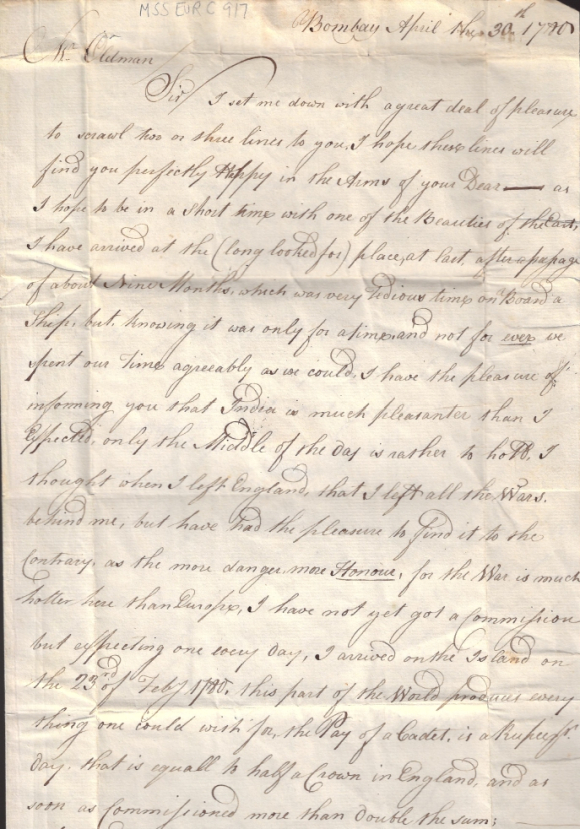 In our next post, I shall tell you more about William Lambert and how his life in India turned out.

Posted by Margaret.Makepeace at 09:00:00 in Journeys , Manuscripts , South Asia , War