I recently came across the 1851 census return for Pembroke House Asylum in Hackney.  This was a private mental health asylum in Mare Street where the East India Company placed patients from amongst its servants and their families. 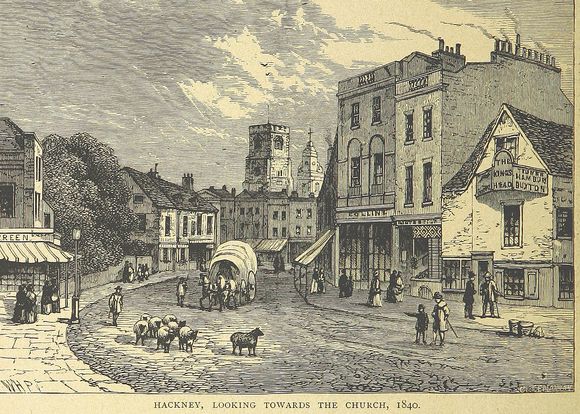 On 31 March 1851 there were 109 patients under the care of Dr Walter Davis Williams, his mother Martha, six male ‘keepers’, two nurses, and  a team of  sixteen domestic staff.   98 men and 5 women were described as East India Company invalids, pensioners, or servants.  Their places of birth have an interesting distribution:

The presence of 65 Irish men would appear to be a reflection of the Company’s policy of recruiting large numbers of private soldiers in Ireland.

My eye fell upon the patient born in Switzerland – a widow aged 33 with the initials ‘M.A.M.’.   I was able to identify her as Maria Augustina Martin in the Pembroke House case book preserved in the India Office Records.

Maria Augustina Martin was born in Mulhouse in the Alsace region and worked there as a dressmaker.  She married and had a baby.  After both her husband and child died, she worked as a servant in Berne.  She then became nurse to the daughters of Madras Army officer Clements Edward Money Walker and his wife Eliza Anne: Julia Rosa born in India in 1845 and Eliza Anne born in Switzerland in 1847.

Maria travelled to Madras with the Walker family.  In December 1849 she was admitted to the General Hospital behaving in a very excited and incoherent manner.   In January 1850 she was transferred to the Madras asylum. The East India Company believed that patients with mental health problems should be removed as soon as possible from the heat of India to give them the best chance of recovery. So Maria was sent to England and admitted to Pembroke House on 22 September 1850.  She was described as being ‘of somewhat spare habit and phlegmatic appearance’.  The supposed cause of her mania was the Indian climate. The East India Company paid for her treatment - she told Dr Williams that she had no friends in Switzerland who might help her.

The case notes for Maria show that she continued to have attacks of agitation, and that the staff found it difficult to understand what she was saying when she was upset because of her accent. She used to walk up and down the garden shouting.

In July 1855, Maria began to suffer from bowel problems. There are very detailed notes of the treatments administered to her by Dr Williams.  Sadly nothing helped and by 23 July it became obvious that she was dying. Williams ‘ordered a little brandy but she only took one spoonful when she sank back & died very calmly’.  A post mortem examination was carried out six hours later.  Dr Williams recorded the cause of death as chronic mania for seven years and obstruction of the bowels for five days. He gave her age as 34. On 25 July Maria was buried at the church of St John of Jerusalem in South Hackney.