A recent acquisition to the India Office Private Papers gives an interesting account of the voyage to India of a new employee of the East India Company.  Randolph Marriott joined the Company as a writer, and his papers include his journal of the journey to India in 1753, which complements the official ship's journal in the India Office Records. 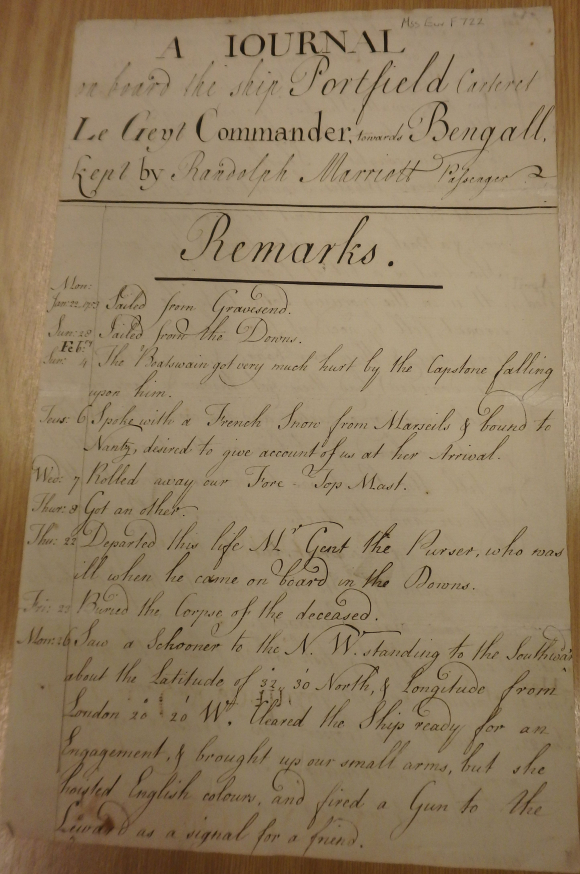 Marriott was a passenger on board the ship Portfield, which sailed from Gravesend on 22 January 1753, bound for Bengal, then a six month voyage, arriving on 25 July 1753.  Along the way, Marriott kept a brief but entertaining account of what he saw on board the ship.  The journal clearly shows the dangerous nature of such voyages.  Only a few days into the voyage on 4 February, Marriott reported that the boatswain had been ‘very much hurt by the Capstone falling on him’, and on 23 February they buried the corpse of Mr Gent, the purser, who it appeared had been ill when he came on board.  There were three more deaths over the course of the voyage.

Marriott describes one particularly hair-raising accident and the dramatic rescue that followed.  On Wednesday 4 April 1753, at 11 in the morning, John Ross, the doctor’s servant accidentally fell overboard, and was in grave danger of being drowned.  Some quick thinking crew members threw a coop containing some ducks over the side, and the cooper Edward Welsted jumped over board and helped the stricken servant onto the coop.  He then held on to him until a boat was hoisted out and brought them both back in alive.  The servant was somewhat bruised by the fall but Marriott reported him to be ‘in a fair way of recovery’.  Happily, the ducks also survived the experience. 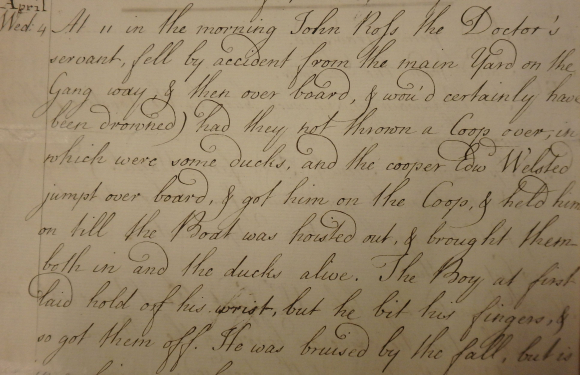 The cooper Edward Welsted again features in the journal, when on the night of 22 May he was put in irons for disobeying and striking the 4th Mate, Mr Edward Altham, and behaving in an insolent and mutinous manner.  Further potentially very serious consequences seemed to have been averted, as Marriott recorded that the next day the cooper was taken out of irons upon his asking pardon of all the officers on board.

Marriott also reported on the sea life he spotted from the ship, mostly whales and sharks.  He described in his journal catching a shark on 31 March, which he said can be caught using ‘a line about the thickness of a penny cord, & a hook 4 or 5 inches long, & ¼ of one round. The bait is a bit of pork or beef’. 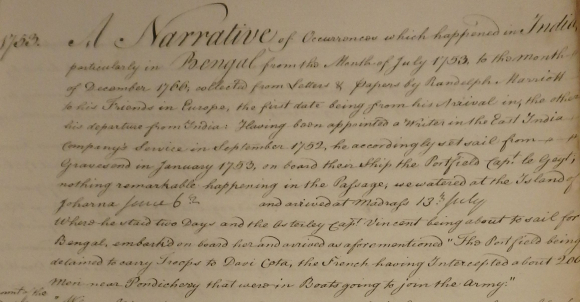 Marriot served with the Company in India until 1766, when he resigned following a dispute with his employers. He arrived home in England on 16 June 1767. During his time in India, he compiled a volume of documents which gave a narrative of the events over that period, including a description of the battle of Plassey and a list of those held in the Black Hole of Calcutta. 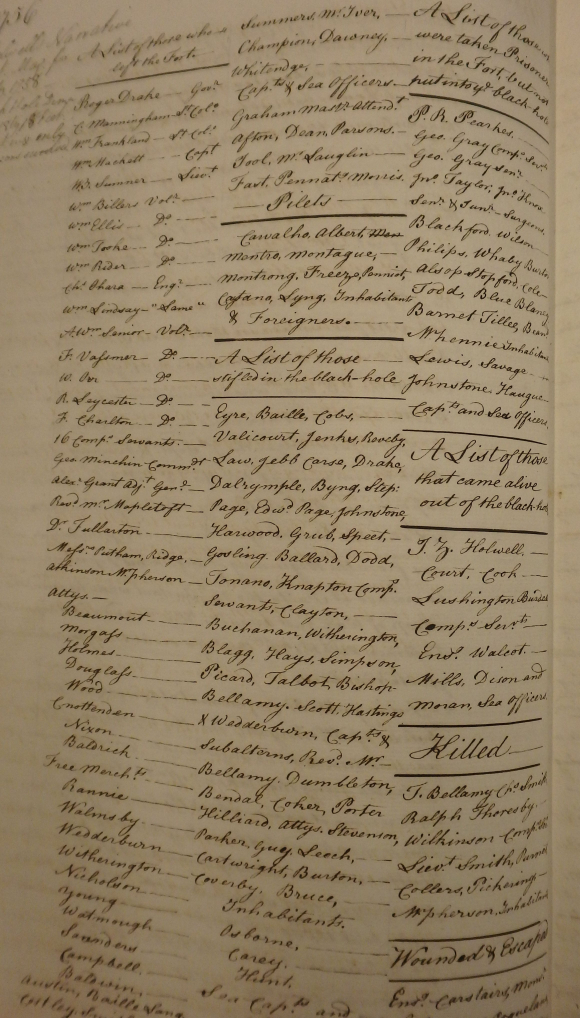 Posted by Margaret.Makepeace at 10:00:00 in Journeys , Manuscripts , South Asia , Work