What is it about cats and Christmas?  There doesn’t seem to be an obvious connection and yet…there are so many books which seem to make the association.

Here at the British Library we are currently celebrating cats in books, manuscripts, artwork and maps in our free exhibition Cats on the Page which runs in the Entrance Hall Gallery until 17 March 2019.

We are lucky enough to have been lent two pieces of original artwork by Judith Kerr which are held by Seven Stories, The National Centre for Children’s Books.  One is of this image from Mog’s Christmas which was published in 1976.  Mog, bewildered by all the Christmas preparations, seeks refuge on a nice, soft, cushion of snow on top of the chimney … you can probably guess the eventual result!  However, all ends happily – and here you can see Mog and the Thomas Family celebrating Christmas together.  If you look closely you will even find a copy of the first Mog story, Mog the forgetful cat, in Nicky’s hand. 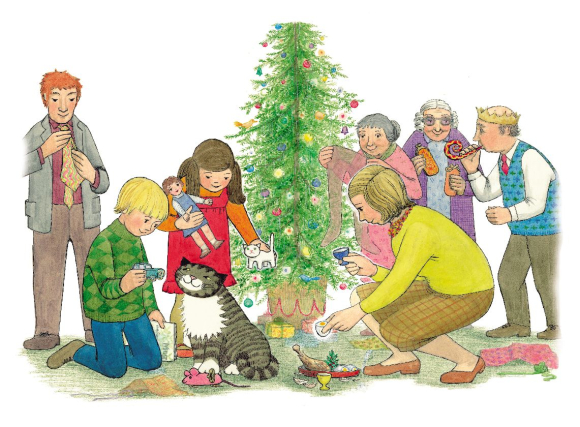 There are at least two pantomimes featuring famous cats – Puss in Boots and Dick Whittington.  In the exhibition we show this poster for a production of Puss in Boots staged at the Drury Lane Theatre over Christmas 1887-8.  Augustus Harris, the producer, specialised in spectacular Christmas shows which drew large audiences and Puss was played by Charles Lauri, Junior, who was famous for his animal impersonations. We also have a pop-up version of the tale by Vojtěch Kubašta, open at the scene with Puss and the cobbler and tailor, next to a leaf from a manuscript of Angela Carter’s re-working of the tale, later published in her collection The Bloody chamber (1979).

As for the story of Dick Whittington and his cat, based upon the real figure of Richard Whittington who was appointed Mayor of London in 1397, we display them as depicted in Lilian Lancaster’s humorous cartoon map of Northumberland.  Lancaster herself was an actor who often performed in pantomimes. 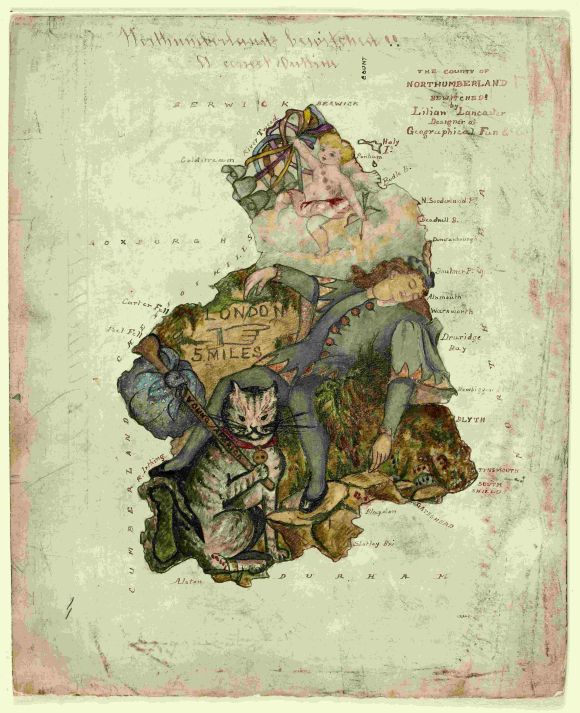 But what of other Christmas cats not currently on display?  Beatrix Potter’s The Tailor of Gloucester is set in the 18th century.  Mice are perhaps to the fore, but Simpkin the cat is a central figure.  The tailor is making a coat and waistcoat for the Mayor of Gloucester who is to be married on Christmas Day.  He sends his cat out to get provisions and more twist (silk thread) and meanwhile finds and frees the mice Simpkin had trapped for his supper.  On his return, Simpkin is annoyed and hides the twist.  The tailor falls ill and is unable to work but when he returns to his shop on Christmas morning he finds the mice have completed everything except for one buttonhole.  Moreover Simpkin, having seen the industrious mice at work, is repentant and gives the tailor the twist which allows him to finish the waistcoat in time. A cat who tries to ruin Christmas for two mice meets his come-uppance on Boxing Day in Nick Butterworth’s Jingle bells.  In Robert Westall’s tale The Christmas cat, set in the 1930s, two children join forces to rescue a stray cat and their actions set in a train a series of new beginnings.  Even Raymond Briggs’ Father Christmas is slightly cheered up when his cat is draped around his neck!

But we are just scraping the surface here - who are your favourite Christmas cats?

Posted by Margaret.Makepeace at 09:00:00 in Arts and crafts , Domestic life