Information about men and women who deserted their families was published in The Poor Law Unions’ Gazette in the second half of the 19th century.  Each week, descriptions of the wanted persons appeared, listing their last known address, their age, height, build, facial features, clothing when last seen, and occupation.  The authorities were keen to trace them because their spouses and children were now chargeable to the Poor Law.  Rewards were offered for information leading to the apprehension of the individuals listed, most of whom were men. Names appeared in the list week after week, sometimes for years, suggesting that no information had been forthcoming and that those sought had managed to cover their tracks successfully. 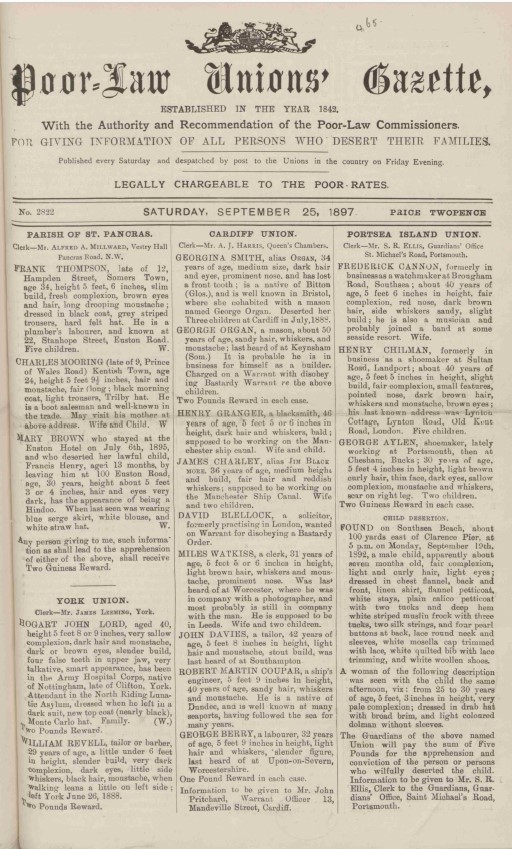 The mini biographies in the Gazette are a rich and fascinating source for social and family historians.  Let’s dip into the issue for 25 September 1897.

Charles Mooring was a boot salesman well-known in the trade, formerly of 9 Prince of Wales Road, Kentish Town.  Aged 24, he was 5 feet 9½ inches tall, with fair hair and a moustache.  He was last seen wearing a black morning coat, light trousers, and a Trilby hat. It was thought that he might visit his mother at the Kentish Town address.  He had left a wife and one child.

Mary Brown had stayed at the Euston Hotel on 6 July 1895 and deserted her child Francis Henry aged 13 months by leaving him at 100 Euston Road.  She was 30 years of age, about 5 feet 3 or 4 inches in height, with very dark hair and eyes, having ‘the appearance of being a Hindoo’.  When last seen she was wearing a blue serge skirt, white blouse, and white straw hat.

Georgina Smith alias Organ was 34, of medium size, with dark hair and eyes, a prominent nose, and a front tooth missing. She was a native of Bitton in Gloucestershire and well known in Bristol where she cohabited with George Organ.  She had deserted her three children in Cardiff in July 1888.

George Organ was a mason aged about 50, with sandy hair, whiskers and moustache.  He was last heard of in Keynsham Somerset and was likely to be working as a builder.  He was wanted for disobeying a bastardy warrant concerning Georgina’s children. 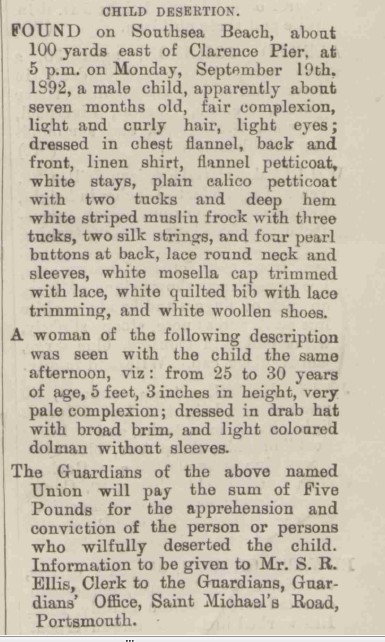 This issue of the Gazette also published details of a child deserted five years earlier.  A baby boy aged about seven months had been found on Southsea Beach at 5pm on 19 September 1892.  He had fair curly hair and light eyes, and was well-clothed in several layers of flannel, linen, calico and muslin, with pearl buttons and lace trimmings, a cap, bib and woollen shoes.  The woman seen with him that afternoon was aged about 25-30, height 5 feet 3 inches, with a very pale complexion. She had been dressed in a drab hat with a broad brim and light coloured dolman without sleeves.

The notices in the Poor Law Unions’ Gazette prompt the reader to wonder about the sad stories which must lurk behind the bare details. What prompted these men and women to disappear? And what happened to the deserted families?

Posted by Margaret.Makepeace at 09:30:00 in Domestic life , Newsroom , Women's histories