From Westmorland to India – William Lambert of the Bombay Army

In our last post we met William Lambert, a young Cadet in the East India Company’s Bombay Army, soon after his arrival in India in 1780.  He wrote to his friend Jonathan Oldman in England giving his first impressions of his new home and joking that a cargo of ‘North Country Ladies’ would be very popular there. View of the lake of Ullswater, Northern England by Thomas Walmsley (1801) Online Gallery

William Lambert was baptised in the village of Bolton in Westmorland on 19 April 1759, the son of yeoman John Lambert and his wife Isabel née Longmire.  In 1778 William was nominated as an East India Company military cadet by director Benjamin Booth.  He sailed for Bombay in the Hawke in June 1779, not arriving there until 23 February 1780.  There were nine other Bombay Army cadets on board as well as a large number of troops and other East India Company personnel.  Jane Wittman and Elizabeth Priscilla Coggan gave birth during the voyage but sadly both they and their babies died and were buried at sea.

The letter to Jonathan showed how keen William was for promotion and a rise in pay.  He was appointed to the rank of Lieutenant on 11 January 1781, and then progressed to Captain in 1796, Major in 1800, and Lieutenant Colonel in 1803. 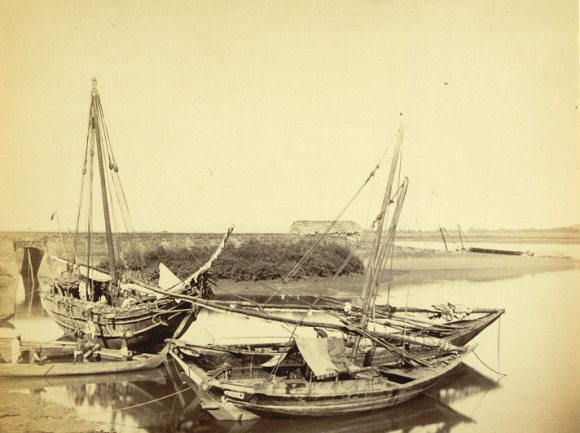 In the 1790s, William was stationed at Tannah (Thane), about 25 miles from Bombay.  He died there on 3 January 1806.  His will made on 2 February 1803 stated that his property was to be divided equally between his two ‘natural’ children born at Tannah: Harry on 4 May 1792 and Anna Maria on 23 September 1794.  Harry was to receive his watch and seals and a cornelian ring.  He named as his executors his eldest brother Thomas Lambert in England, and his friends Fletcher Hayes and William Kennedy in Bombay. 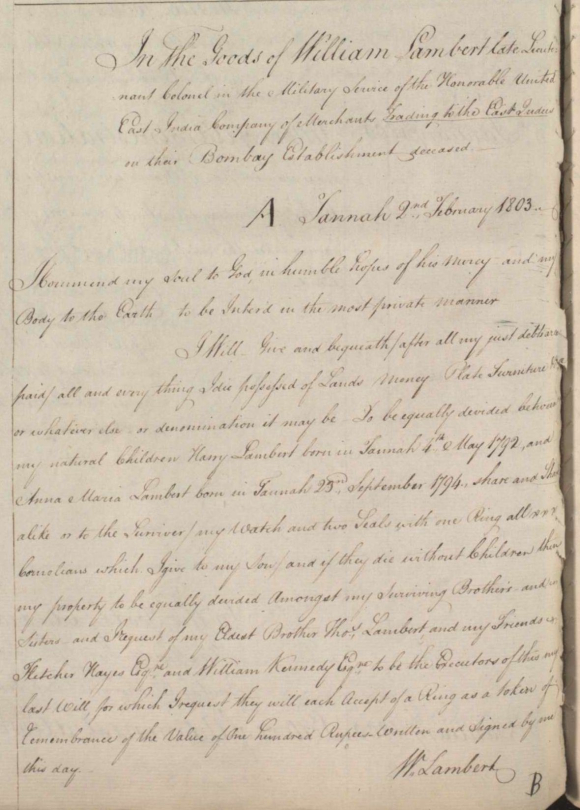 Two months before he died, William wrote a memorandum of debts and credits: 'In case of Accidents which we are all liable too I put down these little matters to prevent trouble'.  He listed debts for cheese, coffee, oil, two pints of catsup (ketchup), a knife, and a plated coffee pot.  None of his servants deserved more than a full month’s wages except his ‘girl’ who was given 200 rupees, clothing, trinkets, furniture, lamps, kitchen equipment, and ‘other small trifles to her with Coffree Boy’ (a slave). This perhaps suggests that the ‘girl’, Bibee Shariffa, was the mother of Harry and Anna Maria.

William's children returned to England after his death.  Both settled in London as adults so perhaps they were cared for by their uncle Thomas Lambert who was a timber merchant in Pimlico.  Harry and Anna Maria were each bequeathed £50 by their grandfather John Lambert when he died in 1829 at the age of 94.

Anna Maria married Parliamentary agent John Angus Walmisley at Margate in 1816.  They lived in London and had five sons and three daughters. Anna Maria died in 1849.

Harry married Tabitha Hatchett at St George Blomsbury in 1817 and they had three children.  Harry’s occupation is variously recorded as gentleman, jeweller, and surgeon dentist.  He also died in 1849.  Harry’s son Alfred Augustus was married in 1861 to Josephine Lambert, the granddaughter of Thomas the timber merchant.