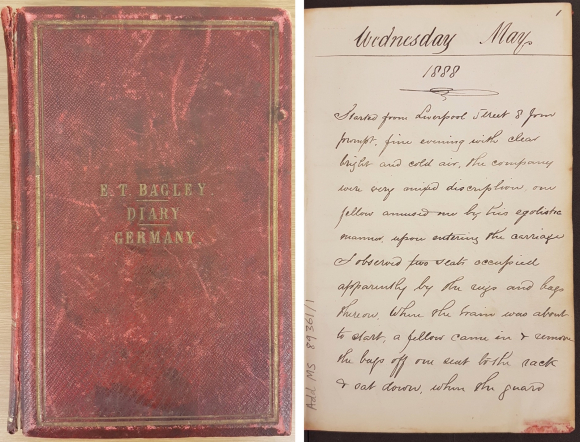 Travelling the world has long been a rite of passage for students and young people, but whereas Instagram is now the place to document inter-railing through Europe or backpacking in South East Asia, 19th-century travellers recorded their experiences in journals and diaries. The Library has recently acquired the diary of ‘E. T. Bagley’, a young man travelling with a friend on a tour of Germany (Add MS 89361/1). Beginning on a Wednesday in May 1888 on an 8pm train from Liverpool Street Station, Bagley’s diary describes his adventures in German cities such as Cologne, Bonn and Darmstadt, as well as Amsterdam and the castles along the Rhine.

Bagley’s diary includes sketches of the places he visited on his tour, including the Ehrenbreitstein Fortress on the Rhine

But what most captured Bagley’s attention was student life in the university town of Heidelberg, and in particular the shocking spectacle of German student duelling (pp. 120-132). Duelling, or academic fencing, was common in major German universities in the late 19th and early 20th century. The resulting facial scars were seen as a badge of class and honour, reflecting the elite social setting in which they were received.

Bagley is both mystified and intrigued by the practice, remarking in his diary that ‘it seems such a foolish and cruel sport I fail to see anything brave or gallant whatever in it, these lunatics gash and cut their faces to make marks of honor forsooth marks of foolery’ (p. 125). He describes the usual behaviour of the students who ‘being Gentlemen and Germans are gentlemen as near perfection as possible’. The violence, he writes, begins in drinking parlours after imbibing ‘Lager beer as many as 13 or 16 pints’, when students begin challenging wearers of different college colours (p. 126). 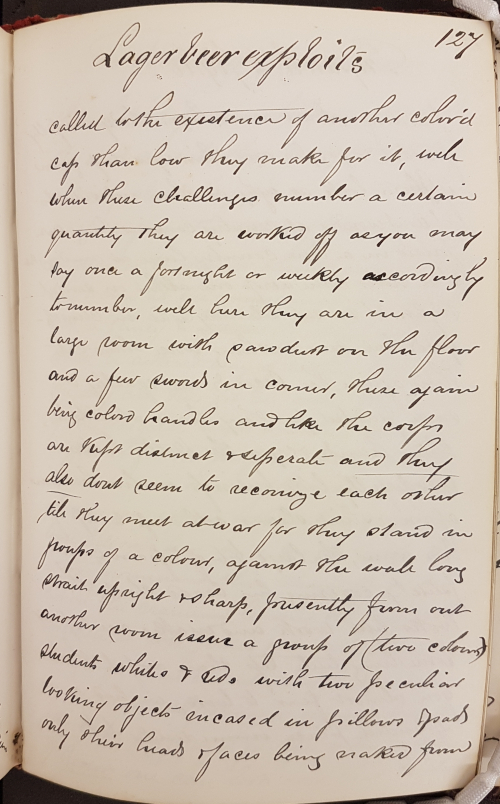 Bagley provides a vivid account of a duel in a drinking parlour:

Well at a given signal from the time keeper at it they go, you hear a fearful din clashing of sharp steel … its next to impossible to follow the sword the rapidity of the movement must be seen to be believed in about 30 seconds their swords are knocked up by the second, and yellow cap has two cuts on the head about 2 inches long and one down the cheek … a copious supply of bright crimson blood that pours rapidly from his head & face down his pads & legs in one broad brilliant hue covering entirely his chest & coming down his right leg & rapidly forming a lake of blood on his foot. (pp. 129-30)

Bagley ironically remarks on the ‘honor’ the students derived from their wounds, and the pride with which they point out the name of German politician (and student dueller) Wilhelm von Bismarck cut into a parlour table.

His contempt is summed up in his final observation on the experience: ‘there was humanity cutting & lashing at each other for amusement inside – outside the glorious sun & peaceful landscape’ (p. 132). 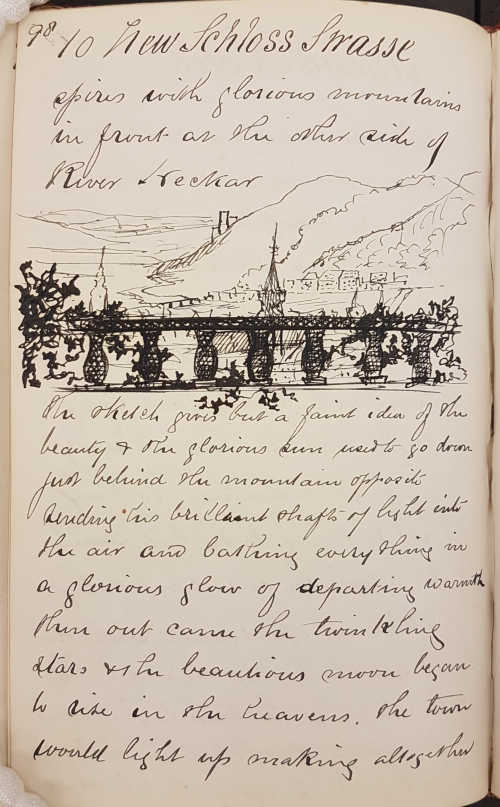 Sketch showing a view across the River Neckar from Heidelberg Castle

Posted by Catherine Angerson at 10:12 AM