Before the end of the 19th century, catching a sight of cheap ballad-sheets, broadsides, chapbooks, and almanacks is how most people in England came into contact with the printed word. 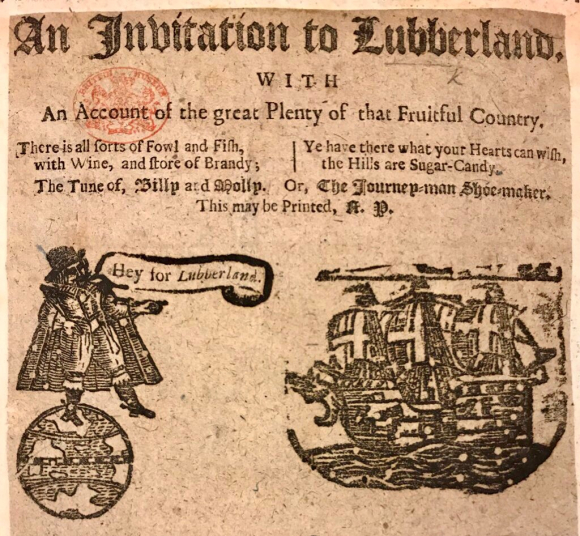 Ballads often blended strands of traditional fable, myth and lore into topical themed entertainment.  In the 17th-century ballad ‘An Invitation to Lubberland,’ a ship’s captain and crew spread news of a far-off land, an English version of the medieval legend of a Land of Plenty, known throughout Europe as ‘Cockaigne’.  This utopia of gluttony and idleness has also been known in northern Europe as Luilekkerland (‘Lazy Luscious Land’) or Schlaraffenland (‘Sluggard’s Land’).

Verses from the ballad tell of ‘streets are pavd with pudding-pies,’ and ‘hot roasted pigs’ that ‘run up and down, still crying out, Come eat me’. ‘The rivers run with claret fine, the brooks with rich canary’. ‘Hot custards grows on eery tree, each ditch affords rich jellies’. BL Shelfmark C.20.f.8.(226)

The word Lubberland in part comes from the Swedish word for lazy.  ‘Lubber’ is popularly associated with the salty, derogatory language of nautical folk.  It is maritime characteristics that are found in this ballad from the English tradition.  An island status necessarily means that such an earthly paradise can only be reached by voyaging the sea. 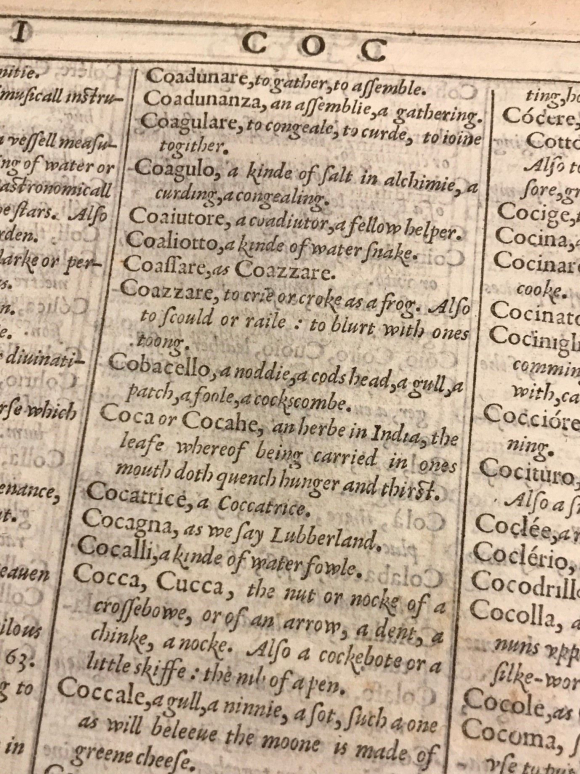 ‘Cocagna, as we say Lubberland’ perhaps the first printed mention of the English variant of the earthly paradise in Florio’s A Worlde of Wordes, or most copious and exact Dictionarie in Italian and English. 1598. BL Shelfmark 1560/4535

Elizabethan poets frequently repeated the spirit of the classics, nostalgically longing for perfect conditions that might be found on the ‘Fortunate Islands’ or the ‘Isles of the Blessed’.  Cheap ballads, chapbooks and broadsides represent a less sophisticated and more popular literature. Lubberland appealed to many an ‘ordinary’ person faced with the all-too-often grim reality of life. 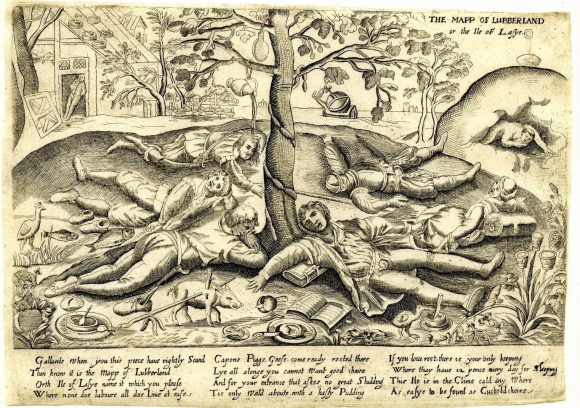 ‘The Mapp of Lubberland or the Ile of Lasye’. An English print (ca. 1670) which is a take on Pieter Breugel the Elder’s ‘Interpretation of Land of Cockaigne’ (1567) ©Trustees of the British Museum.

It’s not always possible to be precise when tracing the use, reception and meaning of particular ballads.  Many are thematically ambiguous, dubious or have multiple meaning and intent.  Of course the land where ‘rocks are all of sugar candy’ and a person is ‘paid fourteene pence a day for snorting’ and lazing around is the stuff of nonsense and make-believe but it does reflect peoples’ dreams.  The necessities of food, shelter, clothes and a pleasant environment are all satisfied in the Land of Plenty, but there are also subversive traces in Lubberland:

‘There is no law nor lawyers fees. all men are free from fury, For eery one dos what he please, without a judge or jury’.

A hankering for justice, freedom and better conditions is projected to far-off lands. 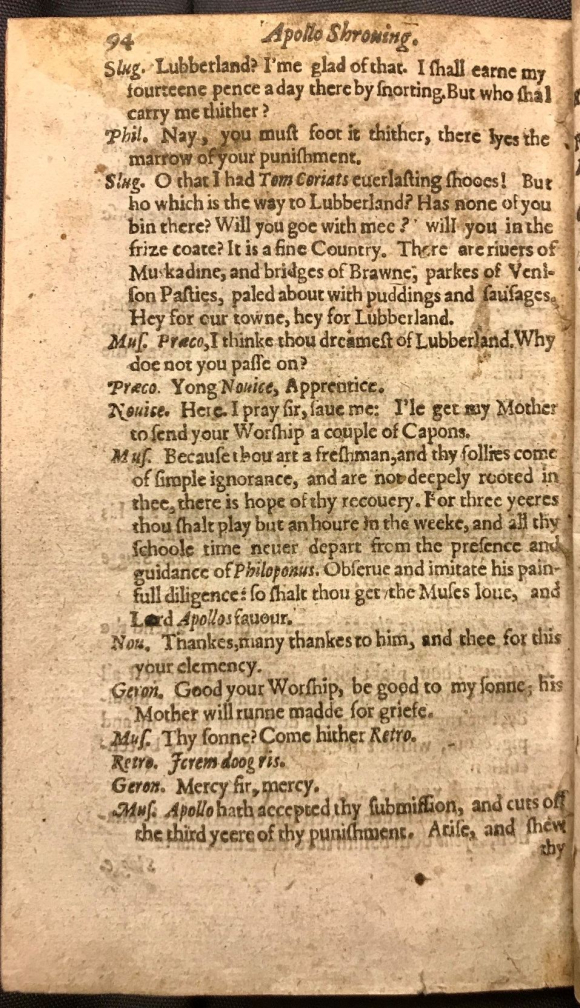 The ballad must surely be mocking such wishful thinking; a life of ease where, ‘They have no landlords rent to pay, each man is a free-holder’ must be just a tall tale – the colourful yarn of sailors! Lubberland is commonly depicted as a land of fools and n’er-do-wells, an unreal place, a place of ‘child’s geography’.  The term becomes employed to denigrate, ridicule or satirise political outlooks that seek to change society.  Walter Scott described Napoleon as, ‘A Grand Elector, who was to be the very model of a King of Lubberland’, and in 1784 Benjamin Franklin insisted, ‘America is a land of labour, not what the English call Lubberland’.

The Topsy-Turvydom of Lubberland seems not simply to be just a bit of fun.  Subversive emotion and impulses which carry the tradition of Cocagna can be seen in other cheap printed literature from the period, like in the tale of  Lawrence Lazy. 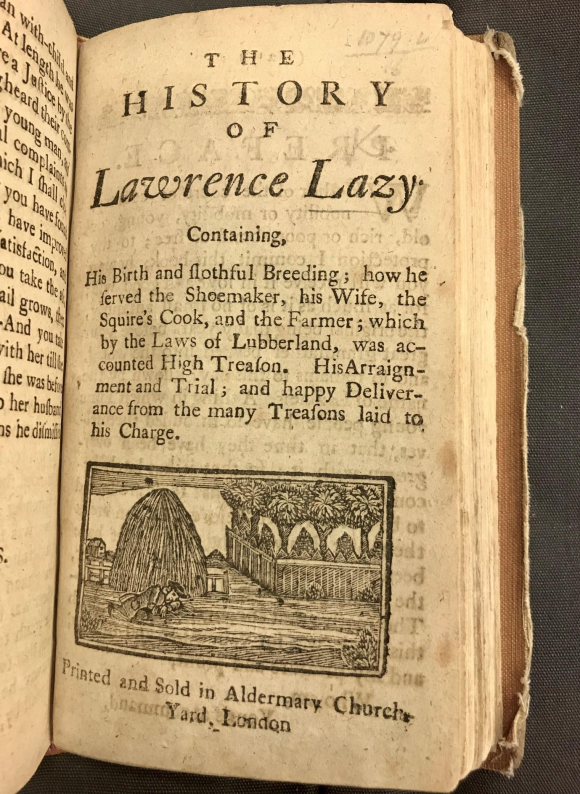 The History of Lawrence Lazy ca. 1750.  Lawrence Lazy, put on trial in Lubberland for casting spells on tradesmen which force them into instant slumber. Lawrence is acquitted by the Jury after supplicant apprentices testify that Lawrence gained them respite from being worked to death by their masters. BL Shelfmark 1079.i.14.(16)

The British Library was pleased to host recently The London Sea Shanty Collective singing sea songs from our collections, including a reinterpretation of ‘An Invitation to Lubberland’ with the assistance of the historian and author, Oskar Cox Jensen. 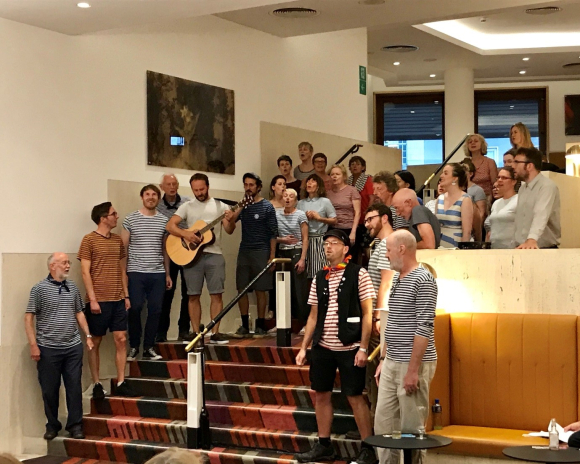 There are thousands of ballads to be found in the British Library’s printed heritage collections.  A new guide is available.