Who repaired the pavements in London?

In 1764 the London Commission of Sewers and Pavements produced a report into the state of the city’s pavements and roads.  The report inventoried the impediments it found to walking and traffic throughout the city.  These included defective pavements, rubbish, unloading wagons, parcels, craftsmen working in the streets, shop signs and rainspouts.  The report concluded that London roads were 'defective, even in the principal streets' and the Commission set about trying to resolve as many of the impediments as they reasonably could.  Many were on the site of properties which the City of London leased to various companies and individuals.  The leases for these properties included clauses regarding responsibility for maintaining pavements and roads within properties boundaries in good working order.

One such lease was between the City of London and the East India Company and was for warehouses on Leadenhall Street, which had been leased by the Company since 1741. 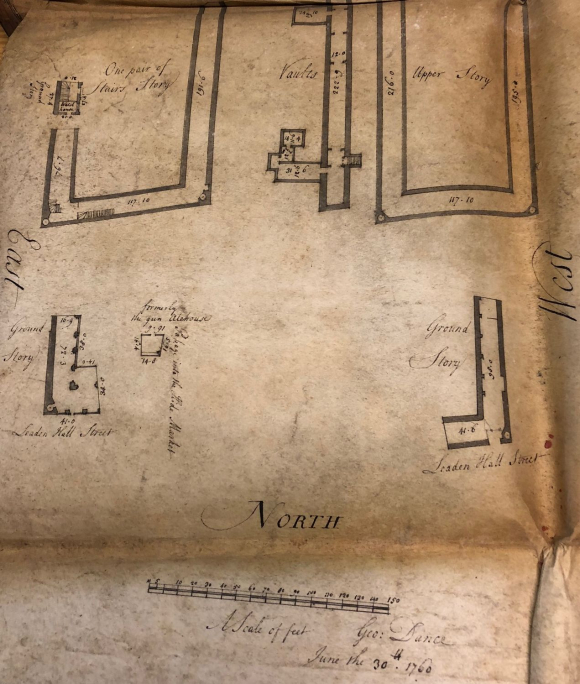 Plan of warehouses on Leadenhall Street leased to the East India Company enclosed with the lease renewal of 31 October 1759. IOR/L/L/2/293

On 31 July 1764 the Court of Directors of the East India Company received a letter from the Commissioners of Sewers and Pavements for the City of London.  The letter concerned the state of disrepair of the pavement in front the Company’s warehouse at Leadenhall Street and requested that 'The Court will cause the said pavement to be forthwith effectually repaired'.

The letter was read at the next session of the Court of Directors on 1 August 1764, and the minutes of this meeting record the Court instructing the immediate repair of the pavement in question. The 1764 report was also responsible for the creation in London, in 1765, of the world’s first kerbed sidewalks, a feature which would subsequently be copied by other cities and can be found the world over today.

Further Reading:
IOR/E/1/46, f 507 Letter 252, John Smith, Clerk to the Commissioners of Sewers and Pavements to Robert James, Secretary to the Court of Directors of the East India Company, 31 July 1764
IOR/B/80, Court Minutes, 1 August 1764.
IOR/L/L/2/293 Renewal of lease 31 October 1759 from City of London to East India Company for warehouses on Leadenhall Street.

Posted by Margaret.Makepeace at 09:00:00 in Science and environment , Work