Blanchard! Where are your trousers? The first crossing of the English Channel in a balloon

On 7 January 1785 Jean-Pierre Blanchard and Dr John Jeffries took their lives in their hands and set off across the Channel in a balloon.  It’s no exaggeration to say this was a life and death moment.  French inventor Jean Francois Pilâtre de Rozier and his co-pilot proved this clearly when they crashed and were killed trying to cross the Channel in the opposite direction in June the same year. 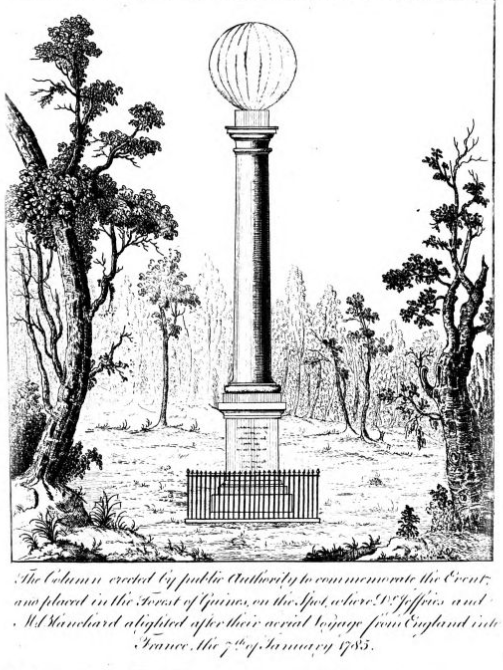 Column erected to mark landing place of Blanchard and Jeffries' balloon from A Narrative of the Two Aerial Voyages of Dr. J. with Mons. Blanchard

After a week of detailed preparations, and with the experience of a flight from London into Kent in the previous November, Blanchard and Jeffries prepared to set off from Dover.  With a keen eye on the winds, they first flew a kite, ‘a paper Montgolfier, and a small gaz balloon’, and then they felt sufficiently confident to launch.

During the crossing, they threw their ballast over the side to keep the balloon airborne.  By the time they were half way across, all of this was gone.  At about half past two, about three quarters of the way across, and as the French coast became clearer before them, the balloon started descending again.  This time they were obliged to throw food, fittings, and some of their equipment into the sea.  This included silk oars, constructed in the expectation that they might be able to ‘row’ through the air.  Still they did not rise.  They stripped off their jackets, and Blanchard even threw away his trousers.  Finally the balloon rose again, and onward they flew until they were over land.

The danger continued as they flew fast over dense woodland, dropping closer and closer to the trees.  Fearful that they would yet crash, they looked around for anything else they could do to lighten the load.  They threw off their life jackets made of cork, since they were no longer over the sea, but still they descended.  Finally, continuing to look for weight, Blanchard reflected: 'it almost instantly occurred to me that we could supply it from within ourselves … from the recollection that we had drunk much at breakfast, and not having had any evacuation, and from the severe cold, little or no perspiration had taken place, that probably an extra quantity had been secreted by the kidneys, that we might now avail ourselves of by discharging … we were able to obtain, I verily believe, between five and six pounds of urine; which circumstance, however trivial or ludicrous it may seem, I have reason to believe, was of real utility to us'.

Thus saved from crashing into the trees, as they slowed they were able to grab branches alongside and gradually lower themselves to the ground, at around 4.30 in the afternoon, when they were well met.  'In a short time, many persons made their way to us in the Forest, from whom we received every form of civility and assistance, particularly, in sparing from themselves clothing for us'.

Further reading:
John Jeffries and Jean-Pierre Blanchard,, A Narrative of the Two Aerial Voyages of Dr. J. with Mons. Blanchard: With Meteorological Observations and Remarks. The First Voyage on the Thirtieth of November, 1784, from London into Kent: The Second, on the Seventh of January, 1785, from England into France (London, 1786) Online version

Posted by Margaret.Makepeace at 09:00:00 in Innovation , Journeys , Rare books , Science