Cats and games of forfeit

Did you play any board or parlour games with friends or family over the festive period?  In our Cats on the Page exhibition we feature a small pamphlet entitled The Pretty, playful, tortoise-shell cat: a new game of questions and commands. 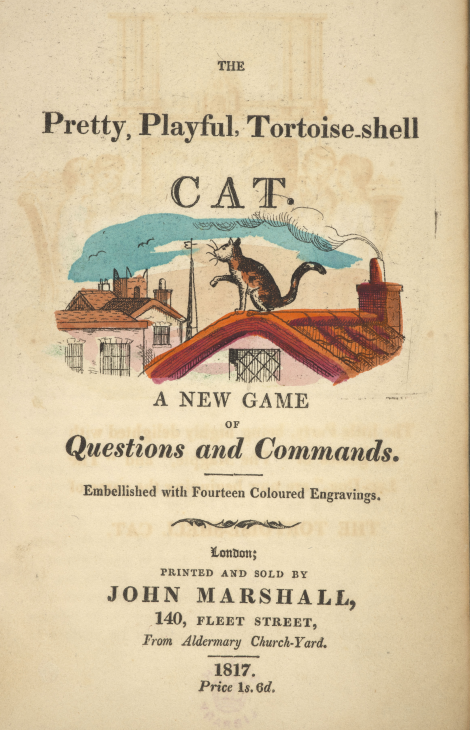 The Pretty, playful, tortoise-shell cat: a new game of questions and commands (London, 1817) © British Library Board

Facing this title-page there is an image of a group of children sitting round the (slightly over-performing) fire with their cat - apparently about to begin playing the game.  The publisher, John Marshall, seized this opportunity to promote two more of his games, namely The Hopping, prating, chatt’ring magpie and The Frisking, barking, lady’s lap-dog which he also published in 1816-17. 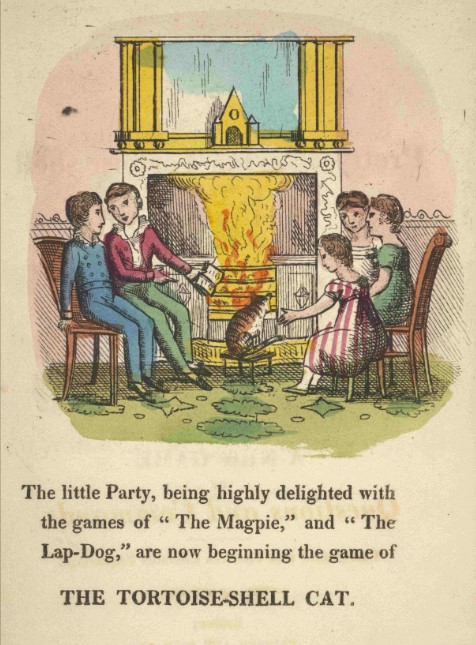 Other titles produced around the same time include The Noble, prancing, cantering horse, also printed by Marshall, and The Pretty, young, playful, innocent lamb, printed for J. and E. Wallis.  (There were also similar games based on the rhyme The House that Jack built and derivatives such as The Barn that Tom built and The Mill that Charles built!).

Several are subtitled ‘a new [entertaining] game of questions and commands’ and essentially they are cumulative memory games with forfeits.  Generally someone is appointed Treasurer and passes a small item such as a thimble to the first player with the command “Take this”.  The first player asks “What’s this?” and the Treasurer replies with the first section of the rhyme (e.g. “The Pretty, playful, tortoise-shell cat…” ).  The first, and subsequent players, then repeat these actions until the thimble returns to the Treasurer.  It is then passed round again with the addition of the second section of the rhyme and so on until the entire, lengthy, rhyme has to be memorised and repeated by each player.  Should a player make a mistake or forget the rhyme a forfeit has to be paid to the Treasurer.  At the end of the game, another player is appointed to devise appropriate tasks for the retrieval of the forfeits – tasks might include solving a riddle, spelling a long, nonsensical word or being tickled.

There seems to have been a brief flurry of these titles from about 1815 to around 1830.  Though Marshall was not the only publisher of such works he does seem to have made these games a speciality.  Presumably they were profitable since his widow subsequently assigned some of the titles to David Carvalho who continued to print them until around 1830.

However their origin appears to have been earlier.  As you can see, there was a formula to the titles, which seems to have drawn on The Gaping, wide-mouthed, waddling frog.  This is believed to have been first recorded in print around 1760 in The Top book of all, for little masters and misses as ‘The play of the wide-mouth waddling frog, to amuse the mind, and exercise the memory’.  It is found again, with instructions, in Mirth without mischief around 1800 and we have a copy of the game based on the rhyme published by A.K. Newman & Co. around 1825.  A version of the verses was also illustrated by Walter Crane in the late 19th century. 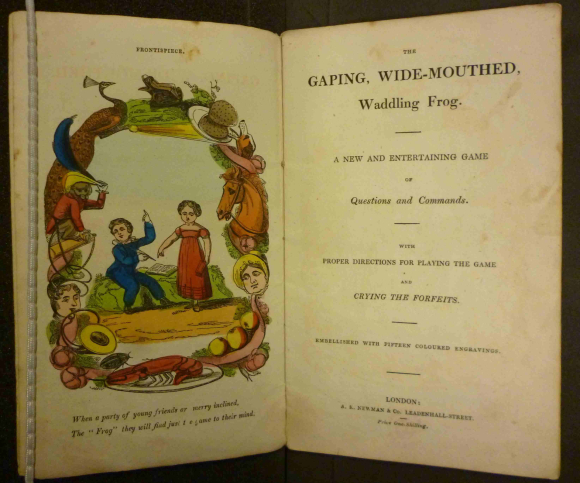 Many of the catalogue records relating to the booklets published in the early 19th century by Marshall suggest that the illustrations were by Isaac Robert Cruikshank.  We shall be looking into stories about his early life in our next post.

Posted by Margaret.Makepeace at 09:00:00 in Domestic life , Leisure , Rare books