On 1 January 1919 the India Office published its honours list approved by the King.  There is a memorandum in the archives giving the reasons why the awards were made.

The first name on the list is Sir Dorabji Jamshedji Tata who was elevated to Knight Commander of the Order of the Star of India (K.C.S.I.) in recognition of being a pioneer of industrial enterprise in India.  He is followed by European, Indian and Burmese men holding civil, military, medical, scientific and diplomatic posts, as well as by Indian princes.  The Maharaja of Baroda and the Maharaja of Alwar, Rajputana, were made Knights Grand Commander of the Order of the Indian Empire (G.C.I.E.), the first for raising cash for the First World War as well as for his life-long efforts to improve the condition of his state; the second for providing soldiers.  Many honours were awarded for services connected with the War. 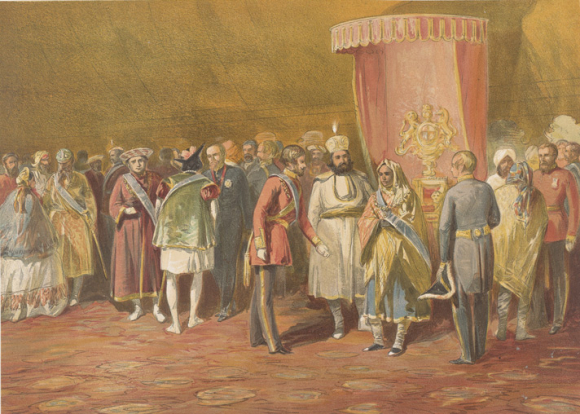 First investiture of the Star of India November 1861 - Plate 17 of William Simpson's India: Ancient and Modern.  The Nawab Begum of Bhopal appears in the centre of the picture. Online Gallery

Forty-seven women in India were honoured in January 1919, mostly Europeans. Three women were made Commander of the Order of the British Empire (C.B.E.). Lady Eva Cardew had undertaken religious and philanthropic work in Madras and Ootacamund, as well as charitable efforts in connection with the War.  Mrs Gertrude Carmichael had worked with the East Indies Naval Fund; Bombay University; and Lady Willingdon’s scheme for maternity homes. Mrs Miriam Isabel Lyons had served for the past three years as President of the Poona Branch of the War and Relief Fund.

Fourteen women were made Officer of the British Empire (O.B.E.).  A number had been active in the Red Cross during the War.  Mrs Maud Lilian Davys had worked as an assistant to her husband Major Gerard Irvine Davys of the Indian Medical Service in a new laboratory for examining foodstuffs at Kasuali in the Punjab.  According to the 1939 Register, Mrs Davys was still working as a food scientist at the outbreak of the Second World War.

Mrs Alice Todhunter’s O.B.E. recognised her work with the Madras War Fund Ladies’ Depot, especially her success in securing the support of Indian women.  Mrs Todhunter had also been busy with the St John Ambulance Association and with the National Indian Association, striving for the education of Indian women and the encouragement of social intercourse between Indians and Europeans.

The list of Members of the British Empire had 27 women, seven Indian.  Bai Champabahen Manibhai of Bombay was praised for carrying on her mother’s philanthropic activities, including providing equipment for the Kapadwanj Dispensary and bearing the expenses of recruits at the Anand Depot.

Three women were awarded the Kaiser-i-Hind Gold Medal.  Miss Sarah Isabel Hatch of the Canadian Baptist Telegu Mission in Madras had established an asylum for lepers at Ramachandrapuram in the Godavari District in 1899 and now had over 100 inmates from across the Presidency.  Mrs Pandita Ramabai of Bombay had furthered the education of Indian women, with a team of ‘English and American ladies working under her’.  There were now 1,000 women and girls at a mission provided entirely by her.  Miss Gertrude Davis was Principal Matron in the Australian Army Nursing Service based at the Victoria War Hospital in Bombay.

Posted by Margaret.Makepeace at 10:00:00 in South Asia , Women's histories , World War One