‘Methods of barbarism’: how Emily Hobhouse exposed the humanitarian crisis of the Boer War

On 24 January 1901 Emily Hobhouse arrived in Bloemfontein, South Africa, bringing with her a large consignment of supplies for the women and children of the refugee camp there.  The inhabitants of the camp were fleeing the fighting and destruction caused by the Second Anglo-Boer War.  The Bloemfontein camp was home to thousands of displaced Boer civilians who were confined in the camp in temporary shelter without the facilities needed to sustain such large numbers.  The appalling conditions that Hobhouse witnessed would motivate her to challenge the British authorities at the highest level.

Hobhouse brought to light the conditions of the camp, as well as the extreme military tactics being utilised against the Boer in South Africa under General Kitchener.  After visiting the camp in Bloemfontein Hobhouse visited a number of other camps to survey the wider situation and found conditions much the same. 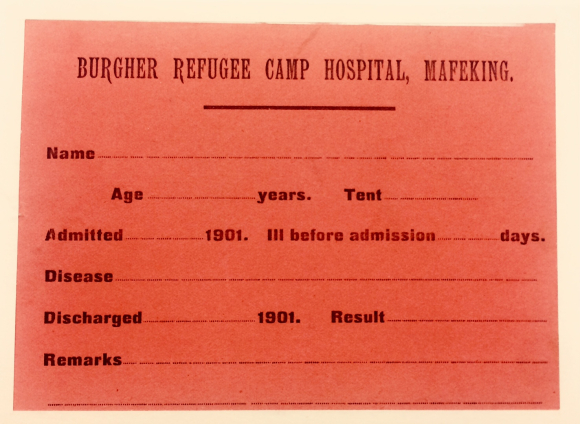 Add MS 42848 A: example of admittance card for the Camp Hospital at Mafeking

Determined to change the situation, she resolved to take it up with the authorities on her return to England.  One of the Parliamentarians she met was Sir Henry Campbell-Bannerman, who was leader of the opposition.  The report of what Hobhouse had encountered in Bloemfontein is recorded in Campbell-Bannerman’s papers at the British Library (Add MS 41252, ff.244-245).

On hearing Hobhouse’s account of the camps in South Africa, Campbell-Bannerman was shocked by such ‘methods of barbarism’.  As well describing as the condition of the people in the camps, Hobhouse lamented how British military tactics were the source of this misery.  She explained that the British Army, wherever they went, took care to destroy all means of subsistence.  They did this by burning farms, grains and livestock.  Such tactics intentionally left the women and children with little choice but to move to the British camps or face starvation.  Her meeting with Campbell-Bannerman led him to make a famed speech on the matter at Holborn in June 1901.  He then took forward her complaints to Parliament, as outlined in Campbell-Bannerman’s ‘Notes on South Africa’ (Add MS 41243 A). 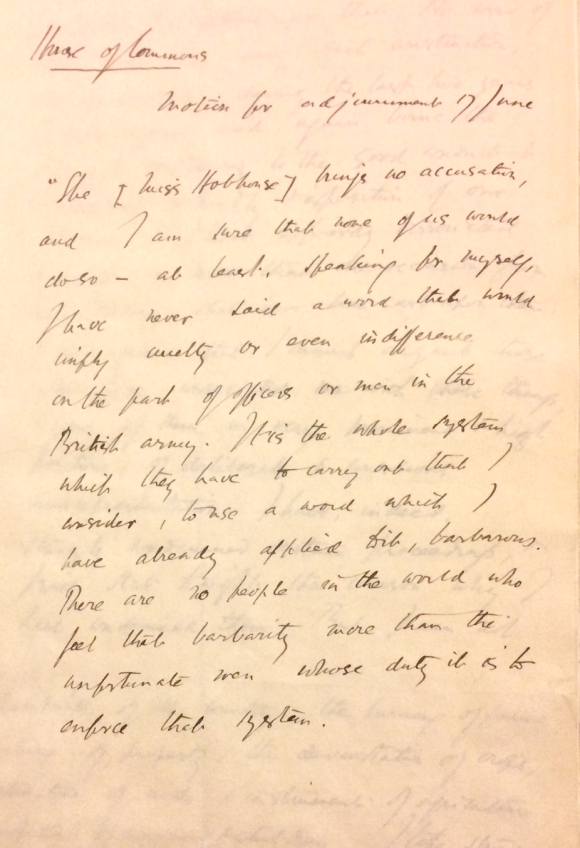 Hobhouse’s protest did not end there.  She sent her report to another Liberal politician, George Robinson, 1st Marquess of Ripon, as recorded in the Ripon Papers (Add MS 43638), and continued to expose the camps in her book The Brunt of the War (1902) which gave testimonies of those who were there.  The book also recorded the number of deaths in the camps, counting them in the tens of thousands and included estimates of the deaths of non-white refugees.  Through this book, knowledge of the squalor of the camps was communicated to the wider public.

Emily Hobhouse and her reports from Bloemfontein gave the British authorities a different perspective on the Boer War and made the camps – which became known as concentration camps – a national scandal.  Her persistence ensured that the conditions of the camps were relayed to Parliament, which was eventually forced to establish the Fawcett commission to investigate.

The signature of Emily Hobhouse on one of her letters to Ripon,Add MS 43638 f.76.