On 13 January 1941 a War Fund Fete was held at Government House, Madras.  As well as raising money for the Madras War Fund, the fete was also intended as a propaganda event. 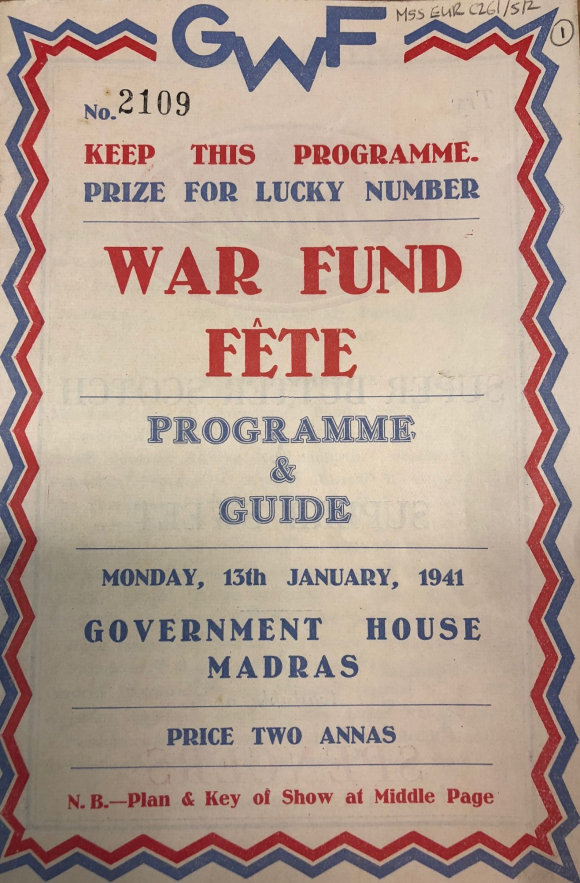 It was a grand affair with the programme featuring 91 entries for stalls, games, entertainments and food and drink establishments, along with more practical facilities including cloakrooms and parcel stores, lost property and medical stations.  Currency for the fete was in coupons and the public had to purchase books of coupons in order to make purchases or enjoy the entertainments on offer.

One local newspaper on the day of the fete described Government House as having been 'transformed into a pleasureland' for that night's merrymaking.  According to the Madras Mail of 14 January 1941, the fete was opened when 'Tough cowboys burst open the gates at Government House yesterday and their tempestuous entrance made it possible for the public to enter at last'.

Many of the stalls were similar to those featured at fetes nowadays with lucky dips, raffles, coconut shy’s, and bagatelle.  Others however had more unusual titles, including ‘Bunty pulls the strings’ and ‘Breaking up the happy home’ (similar to today’s crockery smash stalls).  There were also elephant rides, several magic gardens and even a Chinese Laundry!  One of the most popular stalls at the Fete was that of Woolworth’s.  One local newspaper the following day observed:
'Equally crowded was the excellent “Woolworth” stall, where the most effective household oddments, artfully and thriftily contrived, were sold for a song'.

Entertainment at the fete included two bandstands and a theatre which featured dance groups and musicians as well as plays.  The performances on show included the Tamil comedy The Sub-Assistant Magistrate of Sultanpet and the Tamil play The Pongal Feast.

Food and drink were also in abundance with American style diners and saloons, coffee and refreshment stalls and a Toc H Bar.  For those looking for a full evening’s entertainment there was a Tocaitchaski bar with its own orchestra, a banqueting hall with dancing from 9pm to 2am (evening dress was optional) and a cabaret dinner, promenade and bar with the cabaret performance at 9pm. 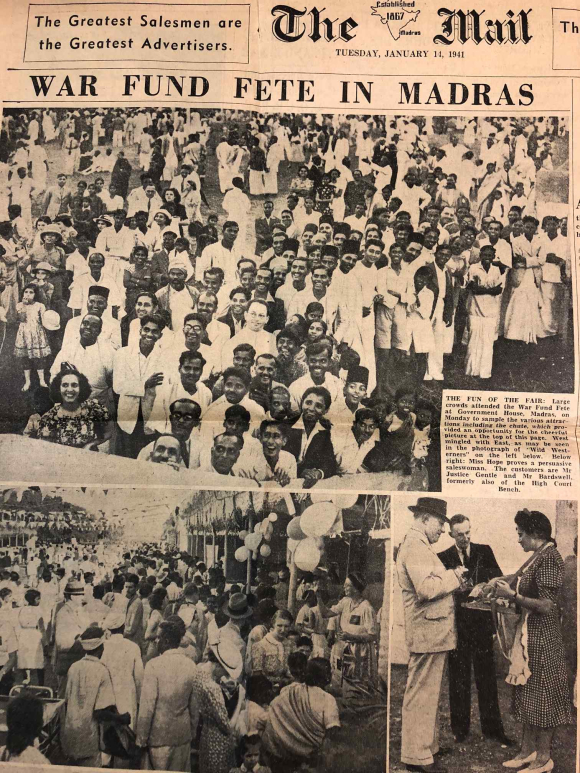 According to the newspaper reports people attended the fete in their thousands: 'In they surged, school boys and girls, scores of excited men and women, mothers with babies and with chattering kiddies clinging to available fingers, happy young things on the arms of their beaux, while burnished cars and buses squeezed through as well'.

In a letter written on 16 January 1941 Sir Arthur Hope, the Governor of Madras, congratulated Captain Thomas William Barnard, Honorary Secretary to the Fete’s organising committee, on the wonderful success of the fete and also commented that 'Apart from the financial result, it was a great piece of propoganda [sic] which will have its effect'.