A little piece of India

In 1917, a new Muslim burial ground opened in Woking for Indian soldiers dying in England during the First World War. 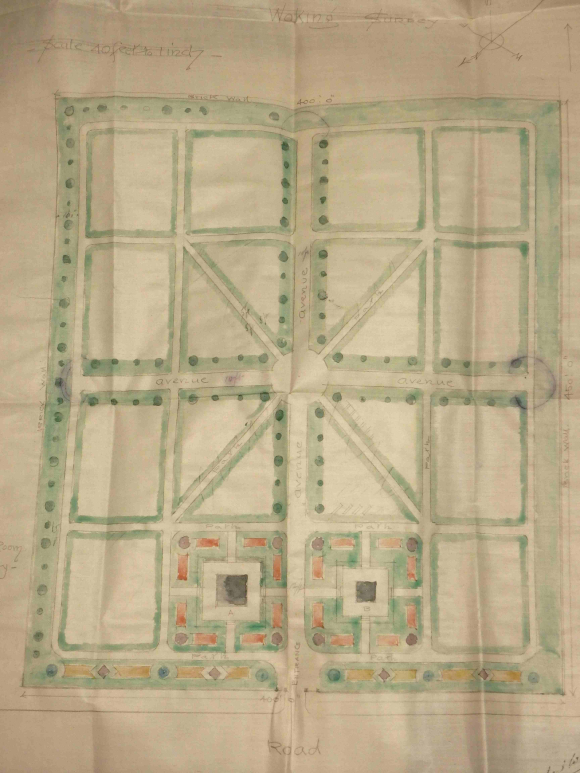 In 2016 we posted a piece about the design of the Muslim Burial Ground with images taken from a military file in the India Office Records.  Today’s post develops the story using evidence from papers in the archive of the Surveyor’s Department.

The file is dedicated to the construction of the cemetery, including correspondence between designers and suppliers, plans of the layout of the cemetery, advertisements for grave and coffin prices, financial statements and the names of seventeen Indian soldiers who were buried at the cemetery. 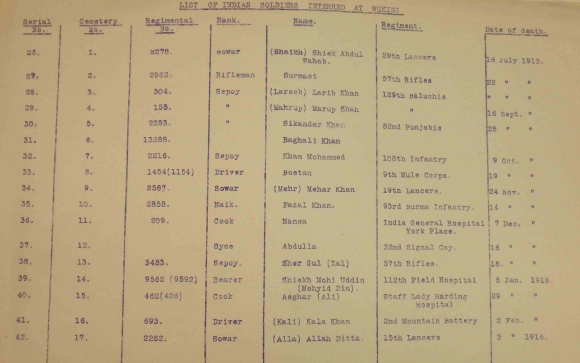 Not much is said about the soldiers, just their regimental number, rank, name, regiment and the date of their death. All seventeen of the soldiers died between 1915 and 1916 and the majority of them were either a Sowar (Indian Cavalry) or Sepoy (Indian Infantry). There were also two drivers and two cooks included in the list.

Unfortunately, the information on the soldiers stops there, with no indication on how they died or where they were before being laid to rest at Woking. The plans show that each soldier was to be buried with his ‘face towards Mecca’ and ‘each stone bears an inscription at the top in Hindustani, and then follows the other details in English’. This indicates that the designers made sure that each soldier was buried according to his religion.

The site designer, T.H. Winny, took great care in the preparations and construction of the cemetery, having it built in the Indo-Saracenic architectural style. Throughout the file, there is correspondence between designer and builders going into precise detail including the ‘recipe’ of concrete to be used (‘one part of Portland Cement to 2 parts of clean washed river or grit sand and 5 parts of screened river ballast’), a building contract (‘the whole of the materials and workmanship are to be the best of their respective kinds’) and even how many cypresses to plant in the grounds (‘100, in 4 varieties, 2-5 feet high’).

A newspaper clipping gives insight into what the cemetery was like upon opening, stating that in the sunlight it ‘assumes quite an Oriental appearance’ and the representative for the newspaper was ‘struck with its beauty and the splendour of some of the stones erected on the graves’. 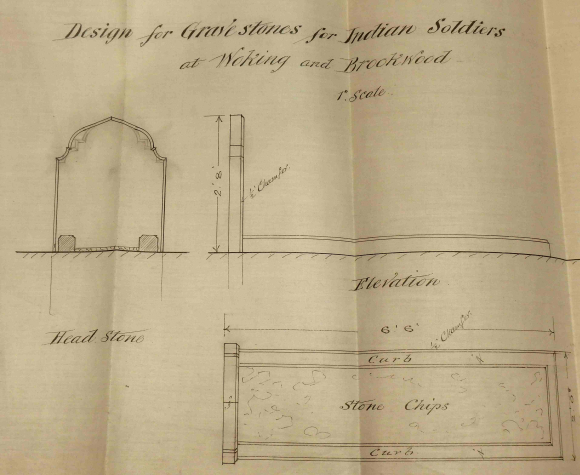 Winny and his team of designers, builders and suppliers did everything they could to make this corner of Woking into a little piece of India.